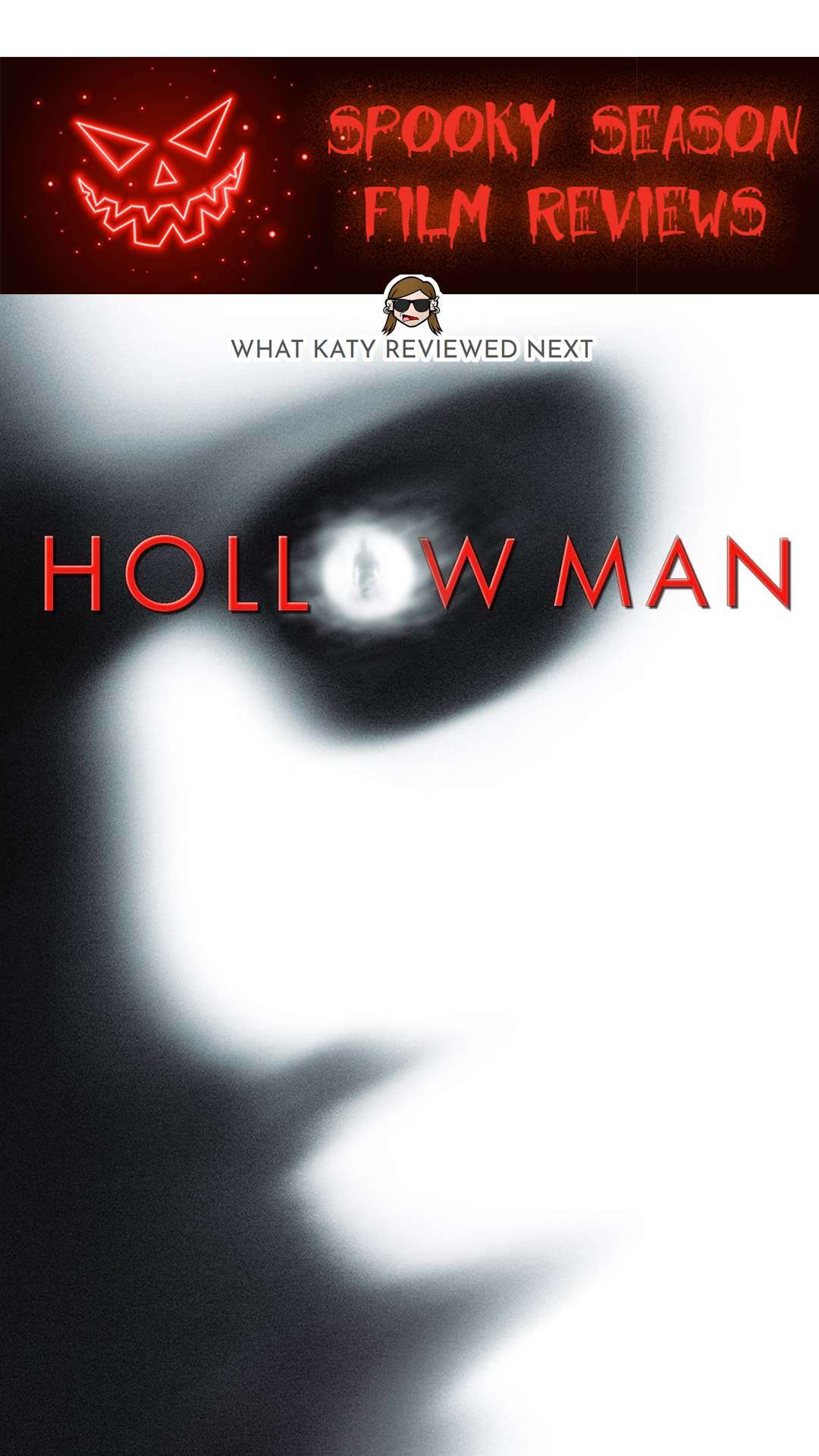 « Venom: Let There Be Carnage
No Time To Die »
Katy Whitton https://www.facebook.com/WhatKatyReviewedNext/
2021-31-10GMT+01006:43:55303What Katy RevIewed Next
Dr Sebastian Caine has discovered how to make living matter invisible. The question is, will he use his discovery to help humankind, or will he allow the power it gives him to corrupt him... 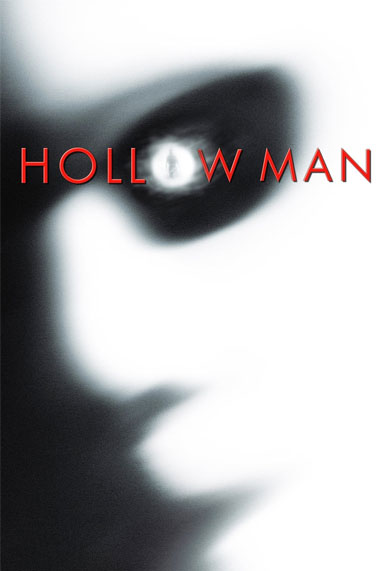 Overview: Dr Sebastian Caine has discovered how to make living matter invisible. The question is, will he use his discovery to help humankind, or will he allow the power it gives him to corrupt him completely?

I don’t think I’ve seen Hollow Man since it first came out back in 2000, and after watching it again, I understand why.

I’m going to give a massive content warning for this film – something I don’t think I’ve had to do before. There’s animal experimentation and death, misogynistic behaviour, sexual assault, and r@pe.

All in all, not a good start.

I think when the film came out the audience was so blown away by the state-of-the-art (for then) CGI that the storyline was almost an afterthought. And sure, we weren’t “super-woke snowflakes” back in the early naughties, but looking at this film now? Yikes.

The film stars Kevin Bacon as Dr Sebastian Caine, a self-absorbed research scientist who has a fondness for calling himself “God”. He works in an underground facility alongside fellow researchers Linda McKay (Elisabeth Shue) and Matt Kensington (Josh Brolin). There are an assortment of other characters but none of them are especially likeable, and the only one who seems to have a sensible head on their shoulders is the vet, Sarah Kennedy (Kim Dickens).

We’re drawn into what they are working on by seeing a lot of animal cages, some seemingly empty but rattle when people walk past. The team are working on making living creatures invisible using a process known as “phase shifting” and it appears that they have succeeded, what they haven’t been able to do though is create the “quantum reversion” required to bring something back.

One evening, after perving on his neighbour as she’s getting undressed (yes, he’s that much of a dick), Caine has an epiphany and after a furious bout of typing on his computer (we all know smacking a keyboard when you have a chemical sequence on the screen is how programming works) he realises he has fixed the problem with quantum reversion.

At the laboratory the next day, they try out Caine’s new formula (because it obviously only takes 2 minutes to manufacture it) on an invisible gorilla and after a few touch-and-go moments, the gorilla goes through quantum reversion and becomes visible again.

At a meeting with his Military bosses (of course they’re the ones funding this), Caine lies and tells them that they are close to a breakthrough in cracking quantum reversion but they just need a little more time. He’s worried that the Military will step in and take the project away from him and Caine is determined to be the first human to phase shift.

Somehow he manages to convince McKay and Kensington that a human trial is a fantastic idea and they don’t need to wait for ages to make sure that the gorilla is alright – I mean, who wants to follow rigorous scientific protocols when you’re, I don’t know, a scientist?

In order to get the rest of the team on board, Caine, McKay and Kensington lie about having Government approval for moving on to the next stage of the experiment and without a care in the world they inject Caine with a blue glowing serum that slowly turns him invisible.

I remember watching this scene for the first time 20+ (argh! I’m old!) years ago and being mesmerised by the CGI which shows the layers of Caine’s skin slowly peeling back to reveal his muscles, then veins and finally his skeleton until he disappears completely.

There’s also an unintentionally hilarious moment later in this scene: Caine is playing hide-and-seek and one of the doctors puts thermal imaging goggles on and you see Caine walking around naked with his willy waving in all its glory – It’s not supposed to be funny but I did have to laugh.

Caine has agreed that he will spend 3 days in a phase shifted state so that they can run experiments on him and then return to being visible again. Almost from the start of the experiment the scientists feel that something is a bit off with him. In previous experiments, the animals showed increased levels of aggression and it appears this is happening to Caine at an accelerated rate.

It’s not just his aggression that’s increasing either, so is his perviness. Kennedy agrees to stay at the lab the first night to keep an eye on Caine but she falls asleep so he takes the opportunity to literally molest her but when she wakes up she’s not sure if it was real or if it was just a dream.

To be safe, they rig up a thermal camera that will monitor Caine when he’s in his bed but being the ingenious scientist that he is (and of course people who work with DNA are excellent at rigging up special motherboards and hacking a camera) he creates a looped video so that it looks like he’s sleeping when in fact he’s off gallivanting around the lab.

On the third day, they try to induce quantum reversion but unlike with the gorilla it fails and almost kills Caine in the process and until they can figure out what’s wrong, he’s stuck. In order to be able to see where he is, and to make him feel a little better they make a latex mask and gloves so he looks at least a little human – despite the fact you can see through his eyes to the back of the mask.

After 10 days he’s going stir crazy so he absconds from the lab and returns to his apartment.

This is where things get really, really dark.

Caine sees his neighbour through the window and she’s getting undressed, so he takes off his latex mask and clothes and goes over to her apartment where he sneaks in and toys with her a bit by moving her mirror around while she’s brushing her hair. He then grabs her and brutally r@pes her and she, of course, has no idea what’s going on as he’s invisible.

It’s hard to know whether it’s the effects of the phase shifting that’s causing a change in his behaviour, or if it’s just allowing his darker self to come out – as we see at the start of the film that he already enjoys watching her so maybe his new found “powers” are just a way to do what he wants, when he wants and to who he wants.

And that’s the problem with this film, you don’t like Caine and nor are you meant to, but his motivations are never explained. Is it a problem with the phase shifting that causes this anger? Is he angry and afraid that he will be invisible for ever and never able to live a normal life again? Or is he simply an entitled arsehole who will push as far as he can until he’s somehow stopped.

Because of this lack of explanation and motivation, the groping and r@pe scenes just seem tacky and gratuitous and are certainly filmed for the male gaze. They could have been left out entirely, in fact I would go as far to say that having Caine lurking in the woman’s apartment while she had no idea he was even there and yet not seeing him actively do anything would have been a far more disturbing scene to have put in the film. The thought of being watched and being vulnerable is a something that everyone can relate to (yes, even men).

McKay and Kensington realise that things have gone too far and decide to alert their oversight committee about what they’ve done and what is happening with Caine, this leads to a bloody showdown between the lab workers and the invisible man they helped to create.

CGI aside, this film is wrong on so many levels. Even if you take out the groping and r@pe, the way that any female character is treated is just disgusting. Granted, McKay does have a couple of comebacks but not many and we also fall into the age-old trope of “strong woman isn’t really strong and still needs a guy to rescue her” which cancelled out any hope of redemption this film may have had.

I was wondering why the film had such a low rating on Rotten Tomatoes (27% critics and 28% audience at the time of writing) and now I know why. Take out the 5 or so minutes of excellent special effects and you’re left with a mess of a movie with an ending that had me shaking my head and asking, “What on Earth were they thinking?”

When you consider that the director, Paul Verhoeven, was coming off the back of the smash hit Starship Troopers and is well known for making other satirical jibes at American Culture with Robocop (I’d buy that for a dollar) he really missed a trick with this film. Mind you, he did direct Showgirls so that goes a long way to explain his view of women and his treatment of them on camera.

Verhoeven could have used this film to really investigate the soul of the main character, did his invisibility turn him hollow or was he always that way thanks to the society we live in? Instead, we get something that seems thrown hastily together in order to come up with some (ridiculous) conclusion that left me wondering what I’d spent the last Hour and three quarters watching.

Hollow Man could have had so much promise but ironically, like it’s main character, it was just a hollow shell of a movie.

Watch this if….. never. Seriously. It’s so, so wrong and I can’t think of a redeeming feature, not even the CGI. You can thank me later.

Let us know your thoughts on "Hollow Man"