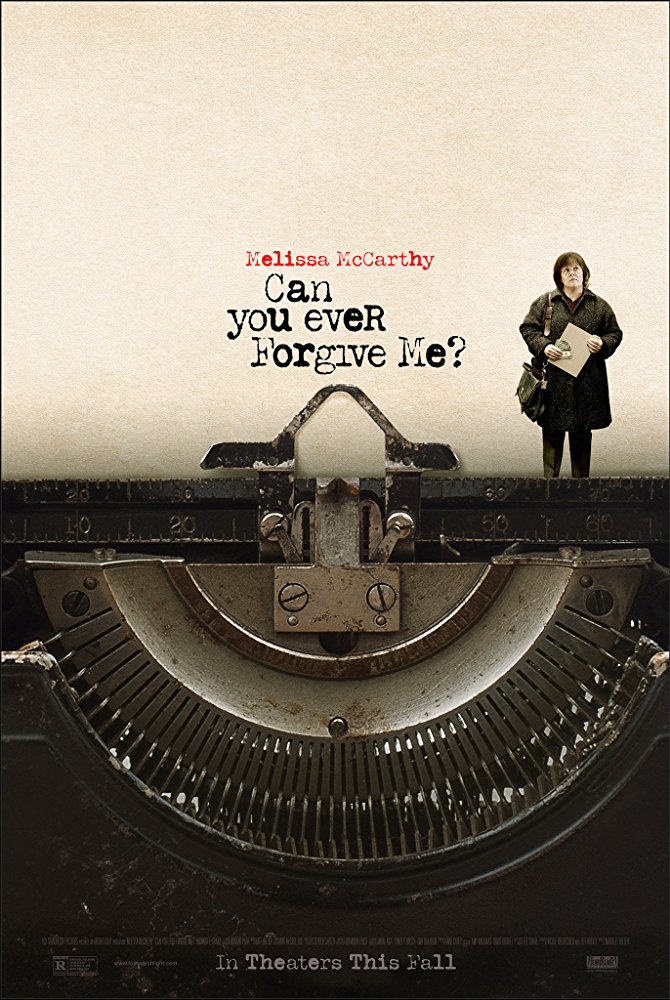 « Vice
The Favourite »
Katy Whitton https://www.facebook.com/WhatKatyReviewedNext/
2019-21-01GMT+010010:00:0820What Katy RevIewed Next
Melissa McCarthy stars a Lee Israel: writer, cat lover, forger and all around horrible person. This film tells the tale of how she became a prolific letter forger, writing under the names of Noel...

Can You Ever Forgive Me Movie Review 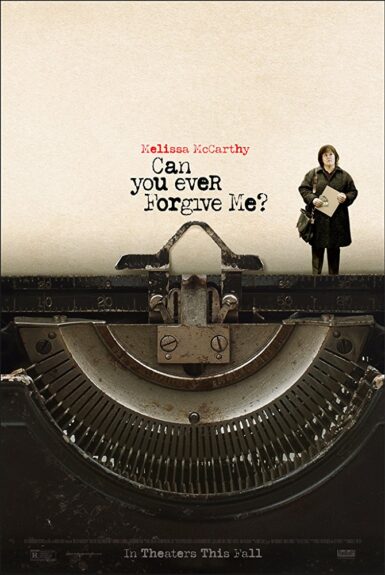 Overview: Melissa McCarthy stars a Lee Israel: writer, cat lover, forger and all around horrible person. This film tells the tale of how she became a prolific letter forger, writing under the names of Noel Coward, Dorothy Parker amongst others, and how she ruined her relationships with those around her for personal gain.

“Can You Ever Forgive Me” stars Melissa McCarthy as Lee Israel, a barely functioning alcoholic whose life starts to go out of control when she loses her job.

Running off the back of a couple of marginally well-received biographies (“I was on the New York Times best seller list, surely that has to count for something?” she moans at her agent) Israel is sure that her new idea of an autobiography on vaudeville actress Fanny Brice is the solution to all her woes. The problem is, this is the early 1990s and no one in interested in biographies, let alone Fanny Brice.

Undaunted, Israel starts her research and it’s while looking through books in a library she comes across some personal letters from Brice herself tucked into the back of one of the books. Israel decides to keep the letters – presumably because she thinks they will add value to her book if she has some personal correspondence that no-one else has – and this sets her on a slippery path to becoming one of the most prolific letter forgers of the 20th Century – with some of her forgeries still in circulation as the real thing even today.

With this being a Melissa McCarthy film, you might think that this is a light-hearted caper movie along the lines of Identity Thief – it’s not. It’s a hard-hitting, no-holds barred look at a very unlikeable character who is horrible to those around her and whose only true friend – her cat Jersey – doesn’t really like her either.

Even by the end of the film, you really don’t feel sorry for Israel’s character – I personally thought that she should have got a harsher sentence considering the lack of remorse she showed over her crimes – she was proud of the fact she was so good at her forging “job” but being banned from almost every library in the US meant she couldn’t carry on her trade as either master forger or serious biographer.

The film is, obviously, centred around Israel but there is quite a strong supporting cast. The excellent Jane Curtin stars as Israel’s put-upon agent; Dolly Wells as Anna, a bookstore owner who starts off as one of Israel’s marks but a friendship starts to bloom in a “will they, won’t they” sort of way which is quite sweet; and Richard E. Grant as Jack Hock (with a Big Cock – his catchphrase, I don’t know from personal experience) a fellow drunkard who Israel is able to tolerate presumably because it’s a novelty to find someone more miserable and untruthful than herself.

Richard E. Grant’s portrayal of Hock has garnered him several award nominations (Golden Globe, BAFTA and Screen Actors Guild no less) and while it was a good performance (I did shed a tear in the last scene he shared with McCartney’s Israel), I was left thinking it was merely a very toned-down version of Withnail (of Withnail & I). There’s the excessive drinking, lewdness and drug taking – in fact the only difference is that you can understand what he’s saying in this film where as he’s a bit too off his face and ranty in Withnail & I.

That being said, while it’s not a new performance from Grant, it is a good one and the on-screen chemistry between Hock and Israel is excellent. Apparently, the role of Israel was originally to be played by Julianne Moore and I’m glad she dropped out. While not an exact look-a-like, McCarthy encompasses the essence of the character – essentially a nasty drunk woman – and I think Moore would have been far too glamorous for the role.

While I don’t think it’s necessarily an Oscar winning performance, it was nice to see McCarthy in a serious role where she’s actually showing her acting ability rather than just being a shouty angry woman. That being said, I’m afraid that I will forever hold McCarthy’s Saturday Night Live’s Sean Spicer in my heart as her best role – it’s a shame he left the White House as quickly as he did – imagine the fun Melissa could have had with him!

Watch this film if you’re looking for some semi-factual cinema and are feeling a bit tetchy (bring a hanky for use towards the end of the film though).

This film has interested me in the subject matter that much I have ordered Lee Israel’s autobiography from Amazon – if you feel like doing the same then you can choose one of the options below. It won’t cost you any extra but I’ll get a small affiliate commission.

Let us know your thoughts on "Can You Ever Forgive Me"