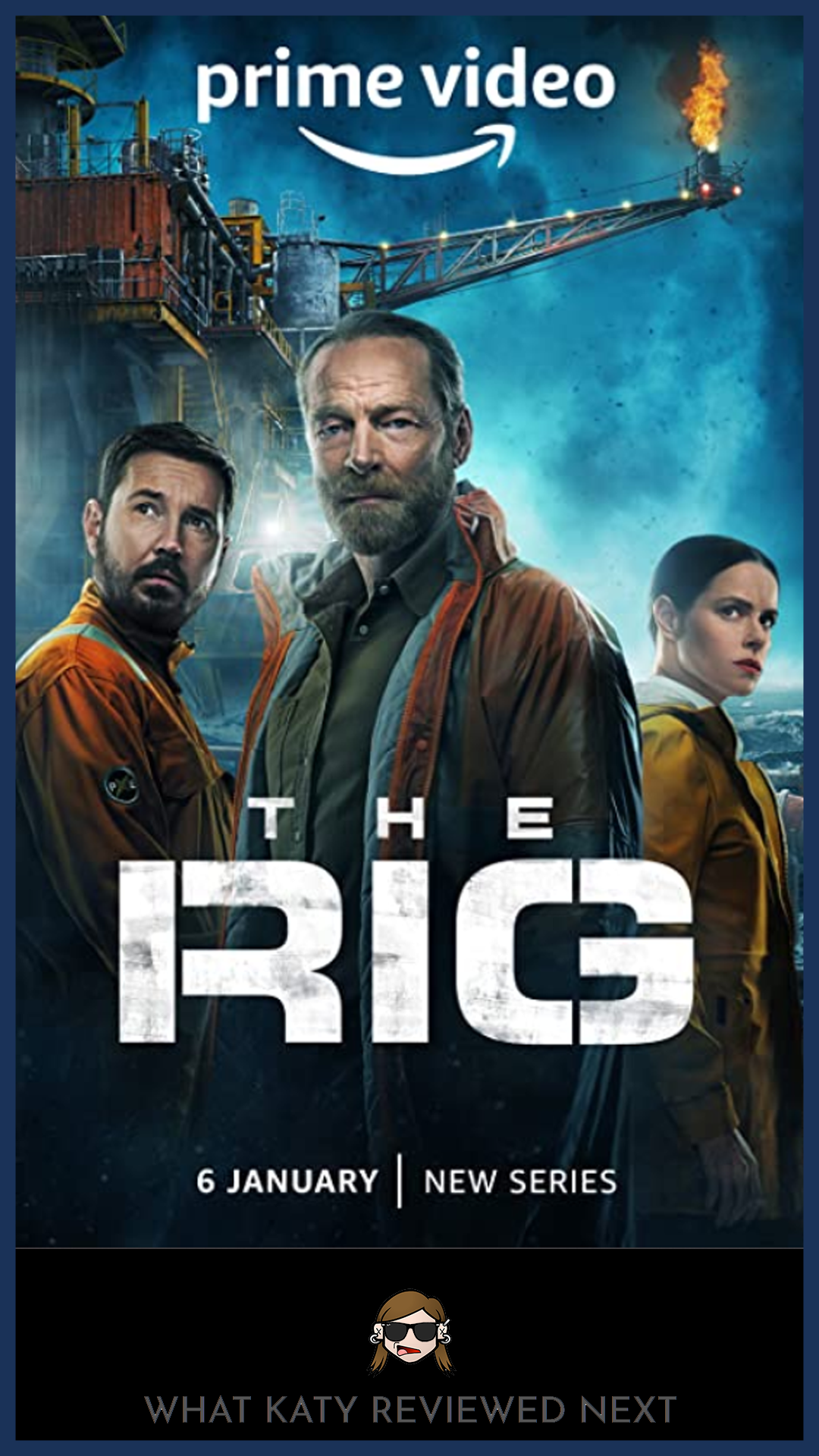 « When They See Us
Katy Whitton https://www.facebook.com/WhatKatyReviewedNext/
2023-19-01GMT+01008:34:2318What Katy RevIewed Next
When Kinloch Bravo experiences power loss and is then engulfed in a strange fog they lose communication with the outside world. Will they be able to find out what's causing this and get... 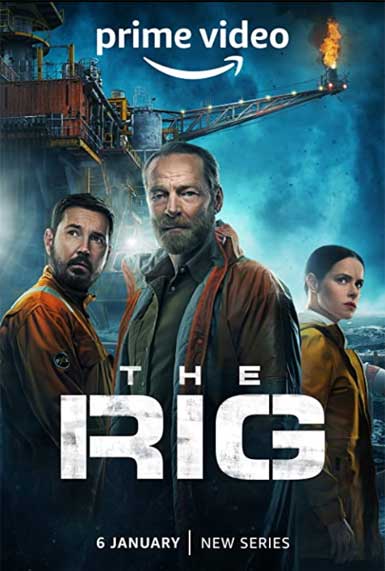 Overview: When Kinloch Bravo experiences power loss and is then engulfed in a strange fog they lose communication with the outside world. Will they be able to find out what's causing this and get home?

I always get a bit worried when I see a TV show or film being advertised heavily to the point of saturation.

In my experience shows and films that require this much publicity are trying to entice an audience in thanks to it not doing as well as it should through critics reviews or word of mouth.

So when every other advert I saw on YouTube was for The Rig, Amazon Prime Video’s new “big budget” offering, I was a bit hesitant to watch. With good reason – but more on that later.

The Rig is the first Amazon Prime Video property filmed entirely on location in Scotland and features a slew of well known actors mainly from a TV background.

The six episodes are all written by David Macpherson in his debut outing and the directorial duties are split between John Strickland (Line Of Duty) for the first three episodes and Alex Holmes (Le Mans: Racing Is Everything) for the final three.

The Rig is set, as you might expect, on an oil rig. We’re transported to the North Sea around 150 miles off the coast of Scotland and join the crew of the “Kinloch Bravo”, one of a series of rigs that Pictor Energy run.

As with most big businesses, the bottom line is paramount and Pictor run the Kinloch Bravo with an iron fist. The crew usually work on a rotation of three weeks on, three weeks off and they are arranging for the regular crew transfer when a series of strange events begins to happen.

There are a series of small earthquakes, a sudden power loss, an apparent explosion on the nearby “Kinloch Charlie” rig and then a mysterious fog begins to roll in that somehow disables communications not only with other rigs and vessels in the area but with the mainland as well. Then ash begins to fall and things get really serious for the crew.

Unable to get an answer as to when their transfer helicopter will arrive and with supplies apparently running short (more on that later) the crew’s morale starts to falter and man-in-charge Magnus MacMillan (Iain Glen – Game Of Thrones) has a hard time keeping the men and women’s spirits buoyed.

Throw into the mix Pictor’s on-rig representative Rose (Emily Hampshire – Schitt’s Creek) wanting to continue operations as normal in spite of the odd occurrences and tensions begin to rise.

It’s only when one of the rig workers, Baz (Calvin Demba – Hollyoaks), has an accident that should have been fatal and yet he miraculously survives that the crew realise something else may be going on rather that just bad weather or a rumble from beneath the Earth’s surface.

I am not sure what Amazon Prime Video means by “big budget” but this series looked like it was filmed on a green screen in someone’s garage. The lighting is off, the focus is off, the CGI is terrible and sometimes the angles make no sense. I don’t know where the money went but it wasn’t on the special effects – someone with Blender who had watched a couple of YouTube tutorials could have done a better job.

There were some “interesting” stylistic choices too when moving from CGI into the filmed content. It was almost (to me) like they were trying to go for cartoon styled transitions but noped on out halfway through (literally halfway through the transition) – and do you know what? If they’d have stuck with that, it would have been a heck of a stylistic choice that would have 100% worked. Except they didn’t follow through so we ended up with CGI transitions that looked like a cartoon drawing. What a missed opportunity.

Let’s move to the script next. I know this is David Macpherson’s first outing as a script writer but I think someone, anyone, could have had some oversight and editorial input. There is so much exposition it’s ludicrous. One minute a character is spouting a verse as if it’s from Shakespeare and then sounding like a character from a soap opera the next.

Any and all character development is shoehorned into irrelevant conversations, from the loss of a child to someone being pregnant, an illicit affair to a navy career. None of these revelations makes sense in the context of the conversations they’re revealed in, nor do they make the characters any more likeable or relatable.

The plot? Well that seems to forget what it’s doing from one moment to the next. I mentioned earlier that because of the fog rolling in that they were going to ration the food? Never mentioned again after that sentence. In fact, even after more people arrive at the rig (a fact that would warrant further rationing, surely?) the cook says “go ahead, make your own food” to one of the crew. WHAT?

Also, let’s take a quick look at Rose. She’s Pictor’s on-rig representative who is supposed to keep things running smoothly, on time and (of course) under budget. Instead of being just a pencil pusher she’s also magically a geologist who, as in most shows of this nature, can apparently science ANY science.

This annoys me as my father was an industrial chemist. You can ask him about anything on the periodic table and what would happen if you mix it, he can tell you how things combine to make other things. What he couldn’t do for example would be to take a blood sample from someone, know what experiment to run and how to interpret anything he saw. Nor could he look at a lump of rock and go “Oh yeah, that’s blah blah”.

Rose though? She seems to know biology, pathology – all the ologies in fact. Although not well enough to WEAR PROTECTIVE CLOTHING when dealing with unknown entities, conduct experiments on what could be dangerous substances while having people coming in and out of her room and just leaving stuff around in the open air when anything could happen (has she not seen The Blob?).

One final note on Rose. OH MY GOD HER HAIR. It was literally super glued to her head for 4 episodes until it actually moved – and please bear in mind she went out into a storm IN THE MIDDLE OF THE NORTH SEA and not a strand moved. It was very distracting to say the least. It almost became a more important (and more interesting) game to watch her hair than what was going on with the plot.

Speaking of the plot. I have no idea what this series was. You could tell that it was trying to combine the fantastic first series of Helix (2014-15) with the drama and angst of John Carpenter’s The Thing (1982) with the intrigue and character conflict from The Mist (2007) and the weird environments from The 100 (2014-20).

On Every. Single. Count.

The characters are unlikeable even with the shoehorned in exposition. There’s no real sense of tension or fear which is down to some very wooden acting, poor direction, lacklustre editing and a non-existent soundtrack which could have helped on so many levels.

I really wanted to like this although I already had feelings it would be a bit naff going in thanks to the aforementioned number of adverts I’d been subjected to (and still am).

I binged this over 2 nights and while it’s an easy watch, you won’t get anything much out of it other than being banged over the head with a few environmental messages that we all should be aware of anyway.

From the trailers and adverts I saw, I was promised a suspenseful thriller that was more creature feature than ocean rig soap opera and while it was certainly different, it was definitely lacking in a few key areas.

If it does get a second season (which I doubt), it will need a more seasoned writer at the helm, directors used to action/thriller genres rather than plodding procedural cop shows (no matter how well they were received) and can we have SOME SUSPENSFUL MUSIC PLEASE?

That’s not too much to ask, is it?

Watch this series if you have 6 hours to spare and would like to listen to Scottish accents that aren’t shouting “FREEDOM” while wearing blue face paint and a kilt.

The Rig is available to watch now on Amazon Prime Video

The Haunting Of Hill House

Let us know your thoughts on "The Rig"