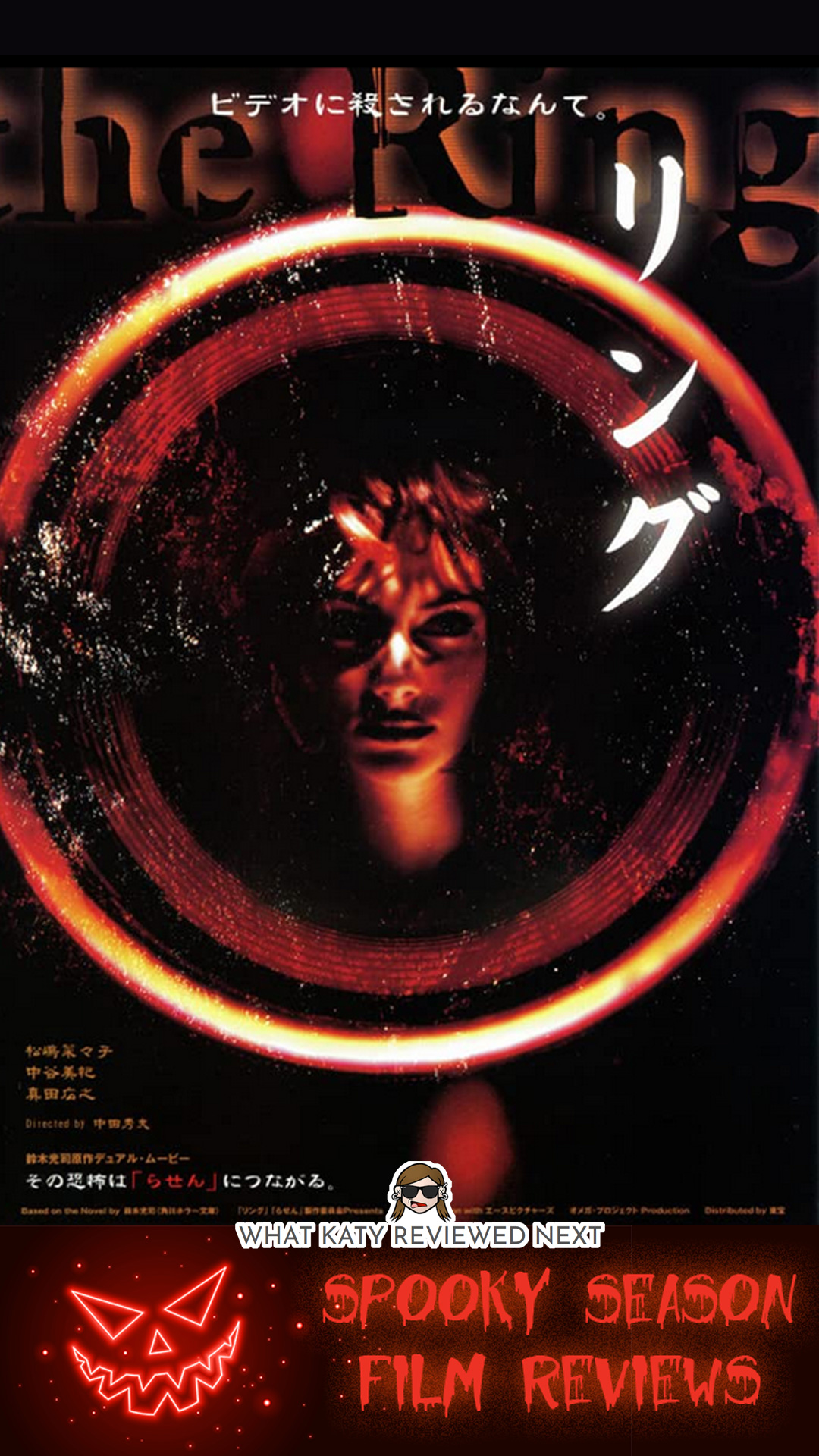 « Ginger Snaps
The Lost Boys »
Katy Whitton https://www.facebook.com/WhatKatyReviewedNext/
2021-20-10GMT+01000:27:29292What Katy RevIewed Next
While researching an urban legend, reporter Reiko finds more than she bargained for. After watching a cursed tape she has just 7 days to solve the mystery of where it came from and save... 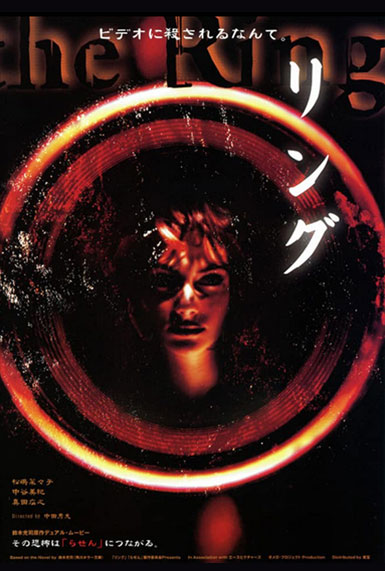 Overview: While researching an urban legend, reporter Reiko finds more than she bargained for. After watching a cursed tape she has just 7 days to solve the mystery of where it came from and save herself.

The Ring (or Ringu to give it it’s proper Japanese title) is a 1998 Japanese horror (J-horror) film that kicked started Western appreciation for a much-overlooked genre of movie making. J-horror differs from Western horror in that it is more psychological, these films are typically slow to build up and lack the gore and jump scares of their Hollywood counterparts.

The Ring had a modest budget of $1.2 million and while it only took around $60,000 on its worldwide release it has slowly become a cult classic – in fact I would be surprised if you hadn’t come across the character of Sadako or her infamous “TV scene” somewhere on the internet. The film’s popularity (and low budget) spawned several knock-off versions, several Japanese sequels and prequels, a three-movie US remake, two TV shows and a South Korean remake among others.

The story itself is simple: Reiko Asakawa (Nanako Matsushima) is a TV reporter who is covering a story about an urban legend that has been increasing in popularity amongst local school children. The story is that there is a cursed video tape and that if you watch it you will receive a phone call telling you that you will die in 7 days and, according the school children they all have a “friend of a friend” who watched the tape and died in mysterious circumstances.

Being a sensible adult and a person who’s used to facts, Reiko doesn’t really take the stories seriously until her niece Tomoko dies in mysterious circumstances and 3 other students at the same school die the very same day in a similarly unusual manner.

Reiko starts to investigate and discovers some photos Tomoko had left to be developed, they show her and the three other dead teens at a cabin in Izu and in one photo all of their faces are weirdly distorted. I think this was supposed to hint at things to come but having used a 35mm camera back in the 1990s I can tell you that loads of random stuff can happen to the film both in camera and during development, so I didn’t think too much of it – until later.

Reiko identifies the dead teens and manages to find some footage her news station took of the two of them being discovered in a car that was locked from the inside, although the film is grainy and shot from a distance, when police and medics manage to get the car door open and a girl falls out you can clearly see the look of absolute terror frozen on her face. Because the car was locked from the inside and the autopsy showed no sign of drink or drugs the deaths are a mystery and it appears that their hearts seem to have simply stopped.

Reiko heads to the campsite where the teens were last altogether and begins to snoop around the cabin they rented. In an act of (in my opinion) sheer idiocy she turns on the TV and starts flicking though the channels even though some of the kids have told her that the legend says there’s a cursed pirate TV station and not a VHS that’s causing the deaths.

Finding nothing in the cabin she heads to reception to ask if the manager remembers the teenagers and if they got up to anything while they were there. While at the reception desk she sees a wall of tapes that people can rent, one of these tapes though is not like the others as it’s in a plain paper case and not the flashy retail cases the other videos are in.

She takes the tape back to the cabin because, you know that is obviously the most sensible thing to do, and she sits down and watches it. I won’t go into what happens exactly because I don’t want to spoil it for you (but if you want to you can watch the original Cursed Ring video here but I take no responsibility for what happens if you watch it).

You would think that being a cursed video it would be full of terrible imagery that would scare the living daylights out of you, instead it’s more of a collection of random clips that seem to have no connection to each other. After you see it, you’re left wondering what all the fuss is about and I think Reiko is wondering the same thing… that is until the phone rings and she answers but there is no one there, or if there is we don’t know what is said to her..

The following day, Reiko invites her ex-husband Ryûji (Hiroyuki Sanada) over and discusses what she has found out about the video and her niece’s death. There’s a lot of tension between the two of them and while we don’t really get to hear their backstory you can tell that they were (and still are in a way) fond of each other.

She gets Ryûji to take a polaroid of her and when it comes out it is all distorted like the photo that Tomoko took a week before she died. Then for some unknown reason, even though it seems that Reiko is leaning towards believing in the curse she only makes Ryûji WATCH THE FLIPPING VIDEO!

She’s just been banging on about a cursed tape and then is all like “here, why don’t you watch it too? What could happen?”

With a slow realization that if the tape is really cursed she only has a few days left to live, Reiko and Ryûji set out to discover the origins of the people on it and why they are important. Soon, speed is of the essence as Reiko finds her son Yôichi sitting down one night watching the video.

As Reiko’s seven-day deadline approaches, will she be able to lift the curse in order to save herself, Ryûji and her son?

This film sets itself apart from Hollywood horror in that it is very slowly paced, and characters find clues and information in little bits here and there whereas in your typical US horror, the main characters go to a library or speak to the old dude in the scary house and all the information they need is revealed at once.

While it’s nice to see a plot be revealed piece-by-piece as it is to the characters, my one main annoyance with this is that it effectively sidelines Reiko and leaves all of the detective work to Ryûji. This is weird as she was the driving force behind finding the truth of the story to begin with and proved to us that she was a good reporter with some of the evidence she turned up.

It’s not that Japanese cinema doesn’t like strong female characters, you just have to look at films like Audition and Battle Royale to see that that isn’t the case, so I don’t know why the writer and director felt the need to push her into the background while Ryûji mansplains himself through the final third of the film. That being said, Reiko’s character is an interesting one and while she does occasionally fall into the “fainting woman” horror trope she can certainly hold her own.

As mentioned previously, we don’t really get to see what the backstory between Reiko and Ryûji is but due to some rather wonderful acting you do really care for these characters and what they have obviously been through together.

The cinematography is excellent and the use of lighting gives a weight of atmosphere to the film that is often missing in low-budget horrors. The lack of obvious scares also lends more gravitas to the film – there are certain points where the director and editor could have pulled a “Boo! Ha! Got you!” moment but instead they do this in a subtle manner that is underpinned by suspensefully quiet music that hints at the horror while adding a great deal of anxiety to some scenes.

The directing is where I feel the film is let down a little bit. The shots seem overly static and rigid – almost like the director were putting on a stage production. I think a lot of this is down to the use of real-world locations for things like Reiko’s apartment which means you are limited in the shots you can pull off but I think a sense of movement would have added to the tension as it would have allowed the director to play tricks with the audience making them see things out of the corner of their eye which may, or may not have been there.

The Ring was my first introduction to J-Horror and I would highly recommend you see it as a starting off point. While it may be subtitled I would recommend you see this version before watching the Hollywood remake – I’ll admit that I haven’t seen the US remake myself yet (although I do have it on DVD), the trailer shows it takes a few liberties with the original story which may change your perception of the story.

While some may argue that due to the lack of blood, guts, general gore and jump scares The Ring isn’t a “true” horror film, I would argue that these suspenseful slow boilers can actually be more effective than films like Halloween or Friday The 13th as there is something much more psychologically unsettling about this type of horror film.

Watch this film if want an excuse not to turn the TV on for a few days (because you’re too scared to do so).

Let us know your thoughts on "The Ring"