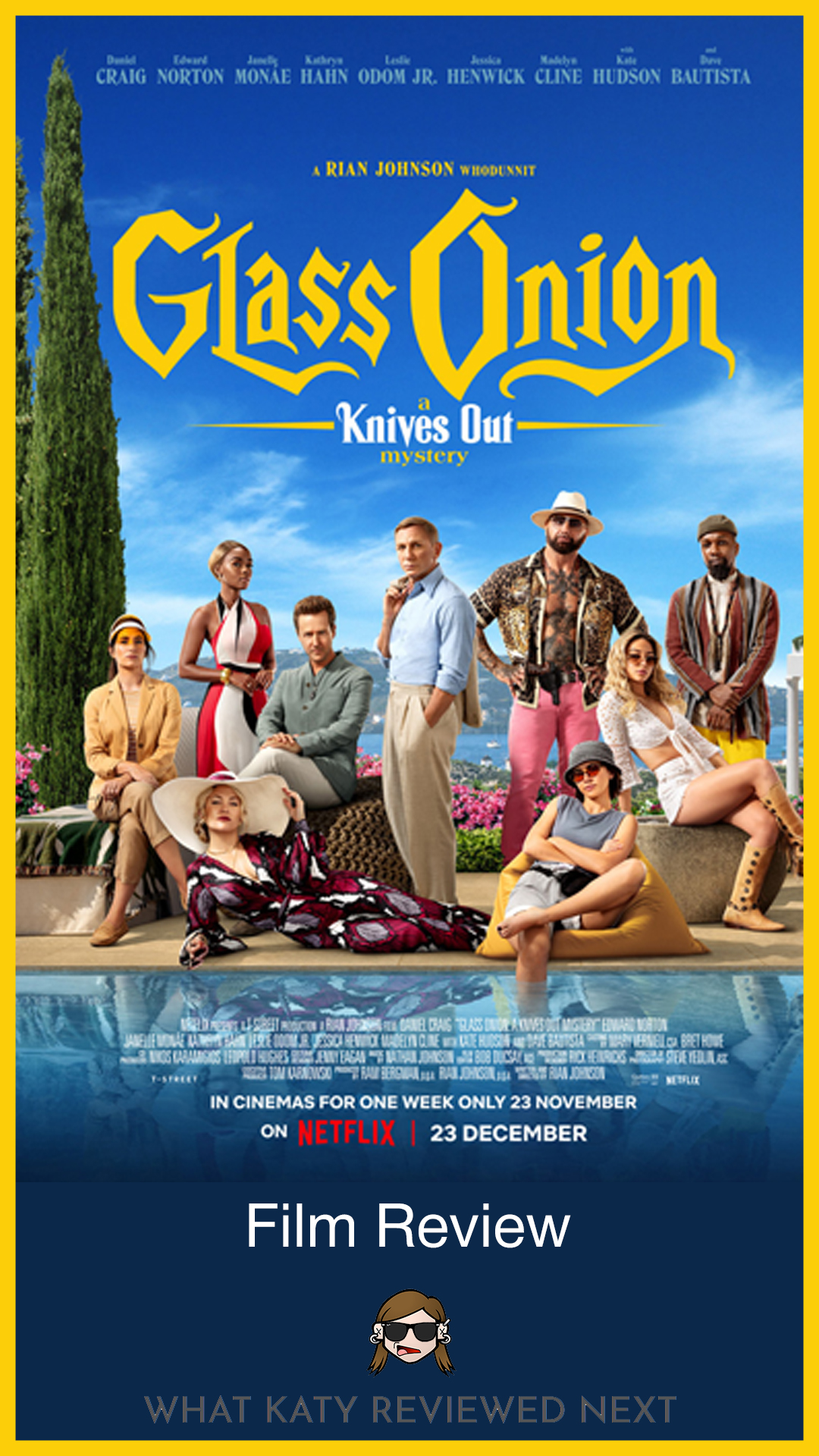 « Moonfall
Katy Whitton https://www.facebook.com/WhatKatyReviewedNext/
2023-01-01GMT+01003:40:200What Katy RevIewed Next
Miles Bron invites four of his friends to an island for a murder mystery weekend but some unexpected guests and an unexpected death change everyone's... 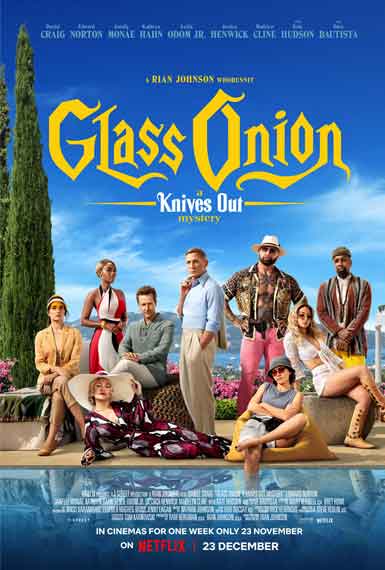 Overview: Miles Bron invites four of his friends to an island for a murder mystery weekend but some unexpected guests and an unexpected death change everyone's plans

Glass Onion: A Knives Out Mystery is the second film in the “Knives Out” series from writer/director Rian Johnson – with at least one more to come after Johnson signed a $100 Million deal with Netflix to provide 2 sequels to the surprise 2019 hit Knives Out.

As with the first film in the series, Glass Onion sees an ensemble cast of varying backgrounds set against the backdrop of a murder mystery. The difference with this film from the first is that instead of being called to investigate a murder, Benoit Blanc attends what is supposed to be a “fun” murder mystery game weekend that turns into an actual murder.

We of course have the return of master detective Benoit Blanc (Daniel Craig – No Time To Die) a droll Southern gentleman with a dry wit and a keen eye for detail.

The host of the weekend is Miles Bron (Edward Norton – Fight Club) who is an Elon Musk-esque tech bro living on a secluded island in Greece with a bizarre onion shaped dome on the top of his mansion because, why not?

Birdie Jay (Kate Hudson – How To Lose A Guy In 10 Days) is a vapid former model turned social media influencer much in the same vein as Joni Thrombey from the first film. Birdie was fortunate enough to launch a line of sweat pants just before the pandemic hit but unfortunately thought that sweat shops were just places that made said sweat pants.

Duke Cody (David Bautista – Guardians Of The Galaxy) is an Andrew Tate knock-off (quite relevant given recent events surrounding the controversial social media figure). The irony is that Duke films all his “anti-women pro-men” videos from his Mom’s literal basement (his mother (Jackie Hoffman – Only Murders In The Building) is hilarious by the way).

Claire Debella (Kathryn Hahn – Bad Moms) is an American politician in the middle of a tough Senate campaign whose biggest donor is Miles but we get the feeling there’s something rather one-sided about their agreement.

Lionel Toussaint (Leslie Odom Jr. – Hamilton) is Bron’s put-upon right-hand-man, taking Bron’s midnight faxes (because he will only use a fax, not email) and turning them into reality – or can he?

Andi Brand (Janelle Monáe – Antebellum) plays Bron’s former ex-business partner who was unceremoniously ousted by Bron and then lost a high profile court case after he took away her share of the company completely.

We also have Peg (Jessica Henwick – Game Of Thrones) who is Birdy’s poorly treated PA and Whiskey (Madelyn Cline – Outer Banks) who is Duke’s seemingly bimboesque arm candy but there’s more that meets the eye with her.

The film starts with Claire, Birdy, Lionel and Duke receiving a mysterious wooden box. They get on a group call with each other and help one another decipher the clues to open various stages of the puzzle. Through this interaction we find out that the main characters know each other although how isn’t made clear yet.

In the centre of the puzzle box is an invitation to Bron’s Murder Mystery Weekend which they all agree to attend even though they will have to travel to Greece in the middle of the Pandemic where it’s inferred travel is still frowned upon.

On reaching Greece the foursome along with Whiskey and Peg are about the board a boat to Bron’s private island when they see Blanc at the dock. This confuses them as no one seems to know who he is or why he would have been invited there. Shortly after Andi turns up and from the outset you can tell that there is something going on between the group and Andi.

After the group arrive at the island Bron takes Blanc to one side and asks him why he is there. It turns out Bron didn’t send an invite to Blanc and so the mystery begins only to deepen further when the fun murder mystery “game” leads to an actual real murder. It’s then up to Blanc to decipher the clues and find out who the murderer is before they can claim another victim.

My Thoughts On The Film

While the time line jumps in Knives Out were a refreshing plot device, in Glass Onion they are far too long and distracting. We see characters walking around for 5 minutes rather unnecessarily as they don’t really add to the plot and these sections could have been edited to speed up the pace of the film which, at 2 hours and 19 minutes is about 20 minutes too long for me.

As with Knives Out, Johnson overuses stereotypes. I get that these are supposed to be poking fun at the current state of society but they are so over stereotypical they become unfunny and are just a hollow imitation rather than clever social commentary.

But this, in my opinion, is typical writing of Johnson. I found the script lazy and formulaic in his first Blanc venture and it’s much the same here. I am afraid to say that I figured out what was going on (and what was going to happen) by about the 20 minute mark in the film shortly after the characters got to the island.

Not to say this ruined the film for me, I still had fun watching the characters bimble about. We had some interesting character development which surprised me for a couple of them, although others remained firmly stuck in the rut that Johnson had defined.

Despite Johnson’s lacklustre script, his direction is reasonably slick and serves the plot well (although as mentioned previously some time could have been shaved off in the edit) however some of his misdirection is rather obvious in its execution and did ruin the reveal somewhat.

The one saving grace of this film – well actually two saving graces – are Craig and Monáe. Their on screen chemistry is mesmerising and you can tell both are relishing their roles with Craig giving almost a knowing wink to the camera at times and Monáe stealing every scene she is in.

I know that the majority of reviewers are raving about this film and saying that it is much better than the first but in my personal opinion the first one – while not perfect – was a breath of fresh air as at the time it seemed to be wall-to-wall superhero movies.

With this second film, while it’s fun it’s nothing new and in no way as innovative as the first.

If you like the first film I am sure you’ll like this, just don’t go into it thinking that it’s a brilliantly clever murder mystery because if you watch closely enough it’s all clearly laid out even without the need for flashbacks.

My suggestion of when to watch this from my Knives Out review stated:

Watch this film if you’ve never seen an episode of Miss Marple or are really dumb when it comes to noticing extremely obvious clues.

And I stand by that for this film. If you like murder mysteries it’s a fun romp but it won’t blow your mind or shift the landscape of the detective drama forever and if you’re observant then you’ll be shouting at the screen when Johnson’s obvious misdirection fails.

Glass Onion: A Knives Out Mystery is available to view on Netflix and make sure you check out the original Knives Out on Netflix too.

Let us know your thoughts on "Glass Onion: A Knives Out Mystery"