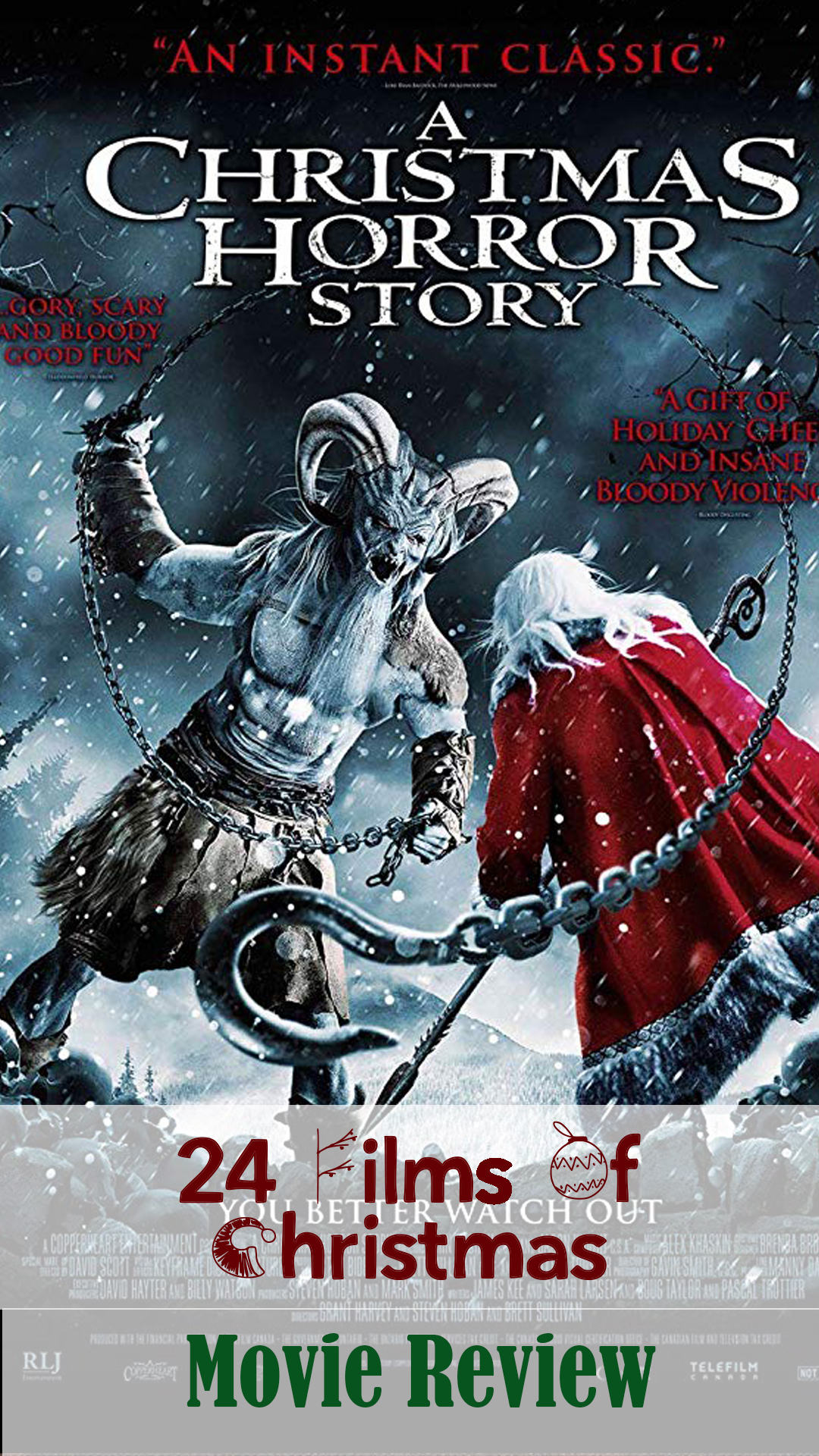 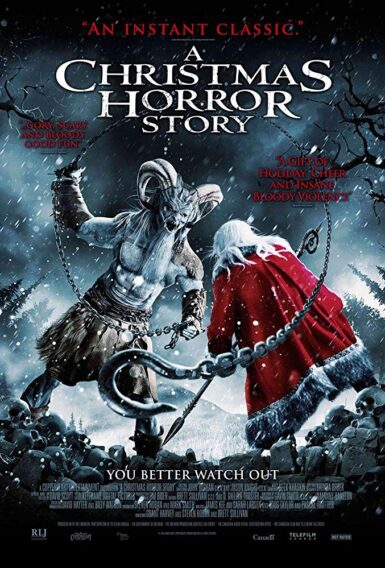 Overview: Interwoven stories that take place on Christmas Eve, as told by one festive radio host: A family brings home more than a Christmas tree, a student documentary becomes a living nightmare, a Christmas s

A Christmas Horror Story is an anthology film that features four separate tales of festive frights. I’m not usually a fan of anthologies as I feel they don’t give you enough time really get into the topic but I was pleasantly surprised with this film. The stories are well thought out and jump from one to another so that we don’t get too bogged down in one tale.

The film opens with Santa greeting his reindeer, as he turns to the camera we see that he has a large cut down his face and blood in his hair and beard. Well, that’s certainly different! He picks up an axe and moves towards the stable door which bursts open and…. we cut to the picturesque town of Bailey Downs, Shatner’s DJ “Dangerous Dan” is announcing that it’s Christmas Eve and is getting berated by his producer for talking about Jesus on the radio. There’s a big food drive at the local mall and radio station weatherman “Stormin’ Norman” will be in attendance. Dan tries to engage Norman in conversation, instead Norman writes Dan a note that says “Fuck Christmas” and storms out of the studio.

We then move to a group of teens – Molly, Ben and Dylan – who are watching a video of Police Officer Scott Peters walking through a crime scene at the local school. One of the pupils has been nailed to the wall and a message has been written in his blood. Now, I don’t usually jump that much at horror films but this scene had be flying out of my pants! I won’t spoil the scare but crikey! The kids are heading off to the school to record some footage for a class assignment, Dylan’s girlfriend Caprice has managed to steal the keys to the high school so they can roam freely and they head off to the school.

We then stay with Caprice’s family, she’s being dragged off to see an elderly relative of her fathers and they’ve barely left town before the bickering between her mother and father begins. As they’re driving, they pass a car on the side of the road and we see Officer Peters, his wife and son getting out. They’re on their way to find a Christmas tree, they trespass onto some land in order to get the “perfect” tree which the wife isn’t too happy about as it’s setting a bad example to their son.

The way that these stories are interwoven at the beginning is very clever with one almost seamlessly leading to the next. In old anthology movies it was all very “clunky”: you would usually each story as a completely separate piece in the film with very little interaction between the various characters.

From this point the movie switches back and forth between Molly et al., Caprice, Scott and Santa’s stories with each getting gradually darker and scarier with each visit.

In Caprice’s storyline, her brother Duncan purposefully breaks a statue of Krampus and their Aunt kicks them out. They then get into an accident and have to fend for themselves in the woods while being stalked by something.

In Santa’s storyline an elf called Shiny gets sick, tries to chop his own hand off and then dies – but elves can’t die and Shiny is resurrected and he goes on a rampage infecting other elves.

In Scott’s storyline, his son wanders off in the woods. After a frantic search they find him hiding in a tree but something seem off about him. He exhibits strange behaviour and attacks his father at the dinner table.

In Molly’s storyline the gang are trying to avoid the Principle while exploring the older parts of the school that used to be run by Catholic Nuns hiding pregnant girls. Ben keeps having a weird feeling as they explore the room where the students died a year previously and they are trapped in the basement as the door is locked and none of the keys mysteriously work.

Each of the stories has a surprise turn – they’re not your run of the mill horror tales, and the twist in the Santa tale was simply brilliant. I’m obviously not going to spoil any of them for you but I think you’ll be really surprised.

Throughout all of this, Dangerous Dan pops up every now and again getting drunker as the film (and his shift at the radio station) goes on and it’s a great tension breaker which means when we pop back into one of the stories we feel the scares and jumps even more.

Is it a Christmas movie? I’m going to say “kind of”. While the Santa story is definitely Christmas themed, the other tales could pretty much be transplanted to any time of the year (with subtle plot changes of course).

Watch this film if you want to see sweary zombie elves or love William Shatner.