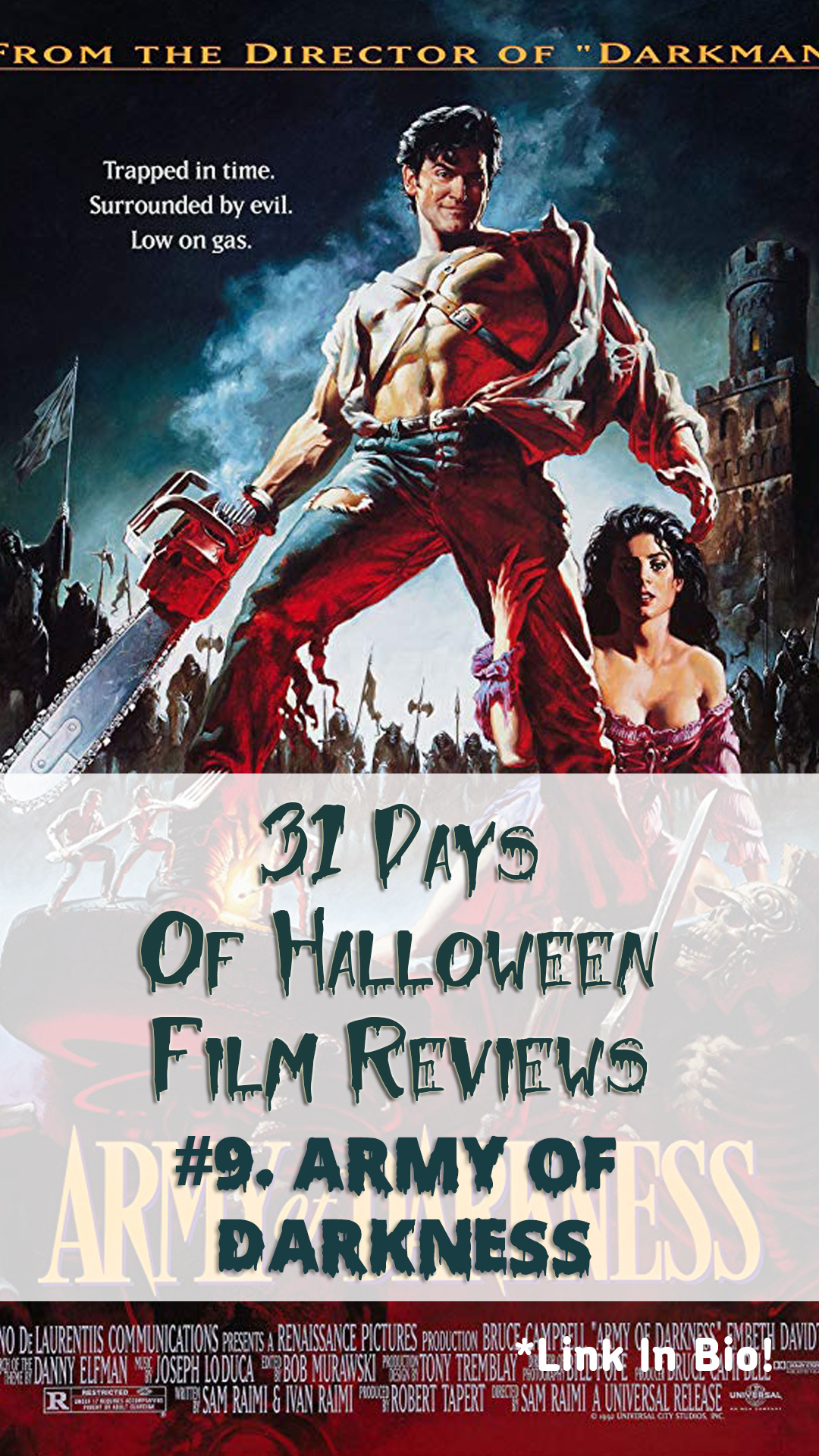 « Evil Dead II
BeetleJuice »
Katy Whitton https://www.facebook.com/WhatKatyReviewedNext/
2019-09-10GMT+010017:18:51281What Katy RevIewed Next
Ash returns in this sequel to Evil Dead 2. Sucked through time, he must quest for the Necronomicon - the Ancient Book Of The Dead - in order to defeat the Army of Darkness and return to his own... 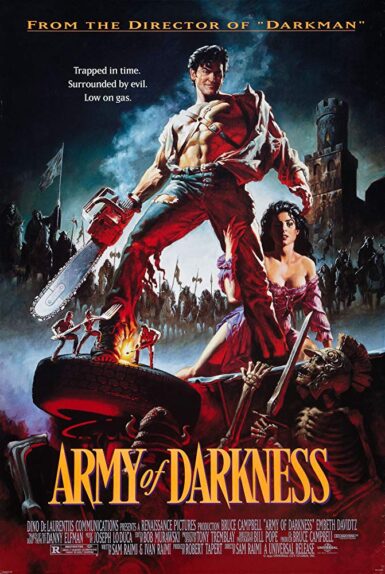 Overview: Ash returns in this sequel to Evil Dead 2. Sucked through time, he must quest for the Necronomicon - the Ancient Book Of The Dead - in order to defeat the Army of Darkness and return to his own time.

Army of Darkness is the third installment of the horror series (or actually the second installment if you think that Evil Dead and Evil Dead 2 are basically the same film).

It opens with Ash, now a slave, recapping events of the previous film. This is shown in flashback and weirdly doesn’t use clips from Evil Dead 2 but recreates them swapping out Denise Bixler’s Linda with one played by Bridget Fonda.

At the end of Evil Dead 2, Ash is sucked through a vortex and lands in a medieval looking setting. It turns out he’s been transported back to the 13th Century into the middle of a war between two opposing Lords and the Deadites are due to rise again soon just to complicate matters further.

The locals don’t seem to notice or care that Ash isn’t from their time and can understand words like “Jack shit”, “arsehole” and “shoe lace”, they also don’t seem to be too phased by a shotgun either. This is a problem as I think it’s a great comedy opportunity that’s been missed.

Ash gets pushed into a pit and after escaping from a fight with a couple of Deadites in a scene that I think was trying to pay homage to the Sarlacc Pit and Trash Compactor scene in Star Wars (and not quite managing it) Ash asserts his chainsaw-backed authority, knocking the local leader out and letting his enemies go free. He then discovers that in order to get back to his own time he will need to quest for the Necronomicon (The Book Of The Dead) as it contains the spell that can send him home.

There’s a big change between the character of Ash in Evil Dead (1 and 2) and Army Of Darkness. Not only has he developed great fighting skills, he’s also become a misogynistic arse hat which is the complete opposite of his character in the previous films (and flashbacks the start of the movie).

While this change is kind of necessary to progress the storyline and create an over-the-top character that fits in with his new world and role, it’s a shame to see what was a complex character reduced to spitting out soundbite catchphrases such as “groovy” and “give me some sugar”.

Okay, okay, I know this film isn’t meant to take itself seriously at all, and that it needed to top the absurdity of the previous films but to completely rewrite a character just doesn’t work for me. Oh, and while we’re on the subject of things not working, how does a someone who works in the home goods department of a supermarket (shop smart, shop S Mart!) know how to construct a hydraulic hand in the 13th century where there’s no pistons or hydraulic fluid readily available? And don’t even get me started on the subject of bullets for his shotgun or petrol for his chainsaw!

Okay, sorry. Rant over I’ll get off my high horse now.

There’s a great sequence of Ash being chased through the woods by the unseen terror and the scene with the mini-Ashes is very funny but unfortunately they don’t make up for a poor script, lazy directing and special effects that fine really stand up considering the year it was made.

While this film is fun, it’s so far removed from the Evil Dead universe that it could really be considered a standalone film and not part of the franchise. The plot is quite thin on the ground and the “shock” ending seems shoehorned in in case the film did well enough for a fourth installment.

Speaking of endings, my DVD copy had the original ending on it which I actually prefered much more to the one that was included in the theatrical release (if you’re interested you can view the alternate ending here).

Watch this film if you’re a fan of Ray Harryhausen-esq stop motion animation or you like films that are set in medieval Europe.

Let us know your thoughts on "Army Of Darkness"