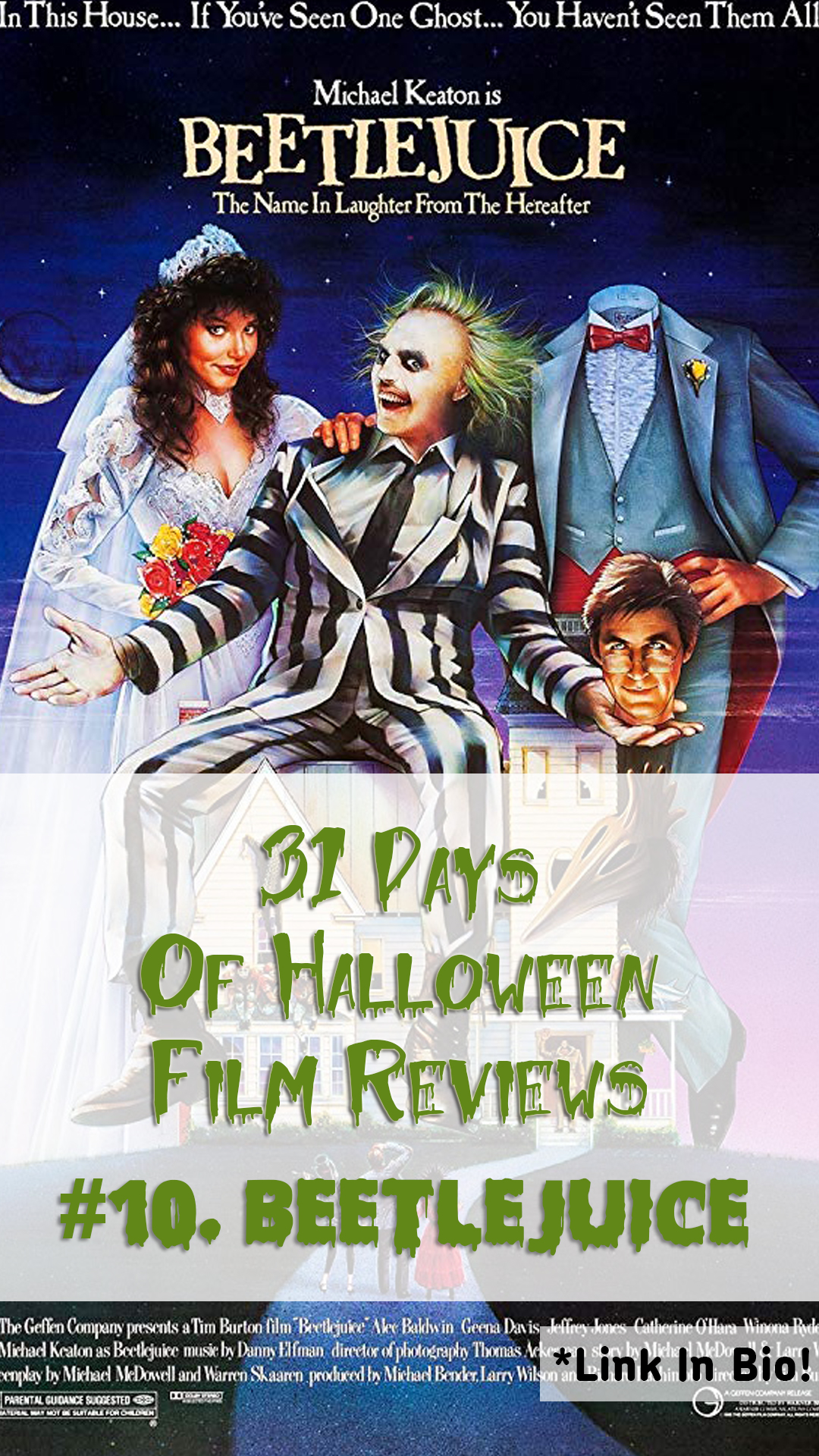 « Army Of Darkness
The Nightmare Before Christmas »
Katy Whitton https://www.facebook.com/WhatKatyReviewedNext/
2019-10-10GMT+01000:50:41282What Katy RevIewed Next
Newly deceased couple Adam and Barbara's home is bought and their happy afterlife if thrown into turmoil. After failing to get ride of the new inhabitants themselves, they turn to Beetlejuice for... 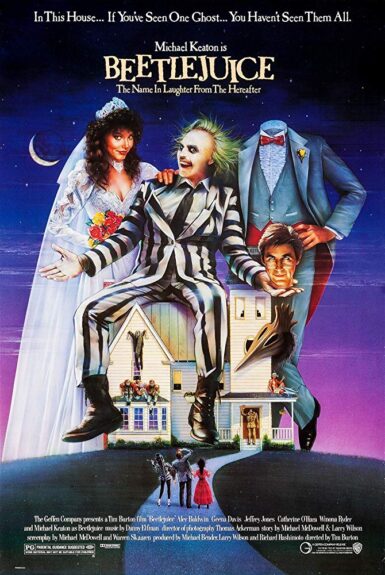 Overview: Newly deceased couple Adam and Barbara's home is bought and their happy afterlife if thrown into turmoil. After failing to get ride of the new inhabitants themselves, they turn to Beetlejuice for help and get more than they ever bargained for.

In the opening sequence of this film we’re treated to a fly by of Winter River, Connecticut, backed by some wonderful music by Danny Elfman. The music is completely at odds with the serene look of the town below us and sets the tone perfectly for the rest of the movie. The flyover we were seeing was actually an overview of a scale model of the town that the film is set in and plays quite a large role in the film.

Our lead characters (Adam and Barbara Maitland) have decided to vacation at home and after avoiding an annoying real estate agent the obviously in love couple heads into town to pick up supplies.

On the way back home, Barbara swerves to avoid a dog and crashes through the side of a covered bridge and this is where things start to go cray cray.

The couple find themselves at home with no knowledge of how they got there, Adam tries to leave the house and finds himself on a strange desert world inhabited by giant worms, Barbara discovers they have no reflections and “The handbook for the recently deceased” is on the living room table.

Barbara starts to get a feeling that they didn’t survive the crash on the bridge and they begin to read through the handbook but it doesn’t seem to be much help as they can’t make sense of it – “It reads like Japanese stero instructions” Adam notes.

The couple try to go on with their lives as normal but are soon disrupted by the arrival of the Deetz family: Charles, his wife Delia and daughter Lydia. They’re also joined by interior designer Otho who is set on turning a traditional family home into a modern masterpiece.

The Maitlands try to scare off the new residents – there’s one particularly scary scene when the pretty Barbara (Gena Davis) rips her face off (which is one of the reasons why the film was a 15 certificate in the UK as the 12A rating hadn’t been introduced then). The problem is, none of the adults can see them so their scares go unnoticed.

It’s the teenaged Lydia who notices the couple staring at her from the attic window and armed with a skeleton key to the house she goes off searching for them.

While Lydia’s trying to break into Adam and Barbara’s attic hideout the TV turns on and we’re introduced to the titular Beetlejuice who is advertising his “bio-excorscism” service (act now folks, you get a free demonic possession with each excorsism!)

Desperate to get the Deetz out of their house and despite being warned about BeetleJuice’s behaviour Adam and Barbara decide to summon him by saying his name 3 times – it’s interesting to note that I will say “Beetlejuice” 3 times but I refuse to say either “Bloody Mary” or “Candyman” more than once.

Beetlejuice brings Adam and Barbara down into the model of the town where he’s been hanging out in the cemetary. He reveals himself to be a crass, chauvantistic and slightly perverted character and the Maitlands decide not to do business with him, particularyly after he tried to look up Barbara’s skirt.

It wouldn’t be much of a film if that was the end of it so of course Beetlejuice ignores the Maitlands and proceeds to cause havoc in the house, almost kill Charles and tricks Lydia into agreeing to marry him.

This is a riot of a film, there’s non-stop action from start to finish and although the film was made in 1988 and doesn’t have the advantage of advanced CGI or animation, the stop-motion and physical effects just add to the film’s weirdness and charm.

Speaking of weirdness, the film is directed by Tim Burton so you know that it’s going to be quite dark, and it is. Beetlejuice is an abhorrent character with no redeaming qualities, he makes you want to squirm and that’s exactly how you’re supposed to feel. Michael Keaton does a great job of acting outlandishly and his obvious rapport with Burton lead the two to collaborate on Batman the following year.

This isn’t a film for young children (although I think I would have been around 11 when I first saw it) as there are a few gory scares that you should be mindful of.

Watch this if you’re in the mood for something differently scary.

Let us know your thoughts on "BeetleJuice"