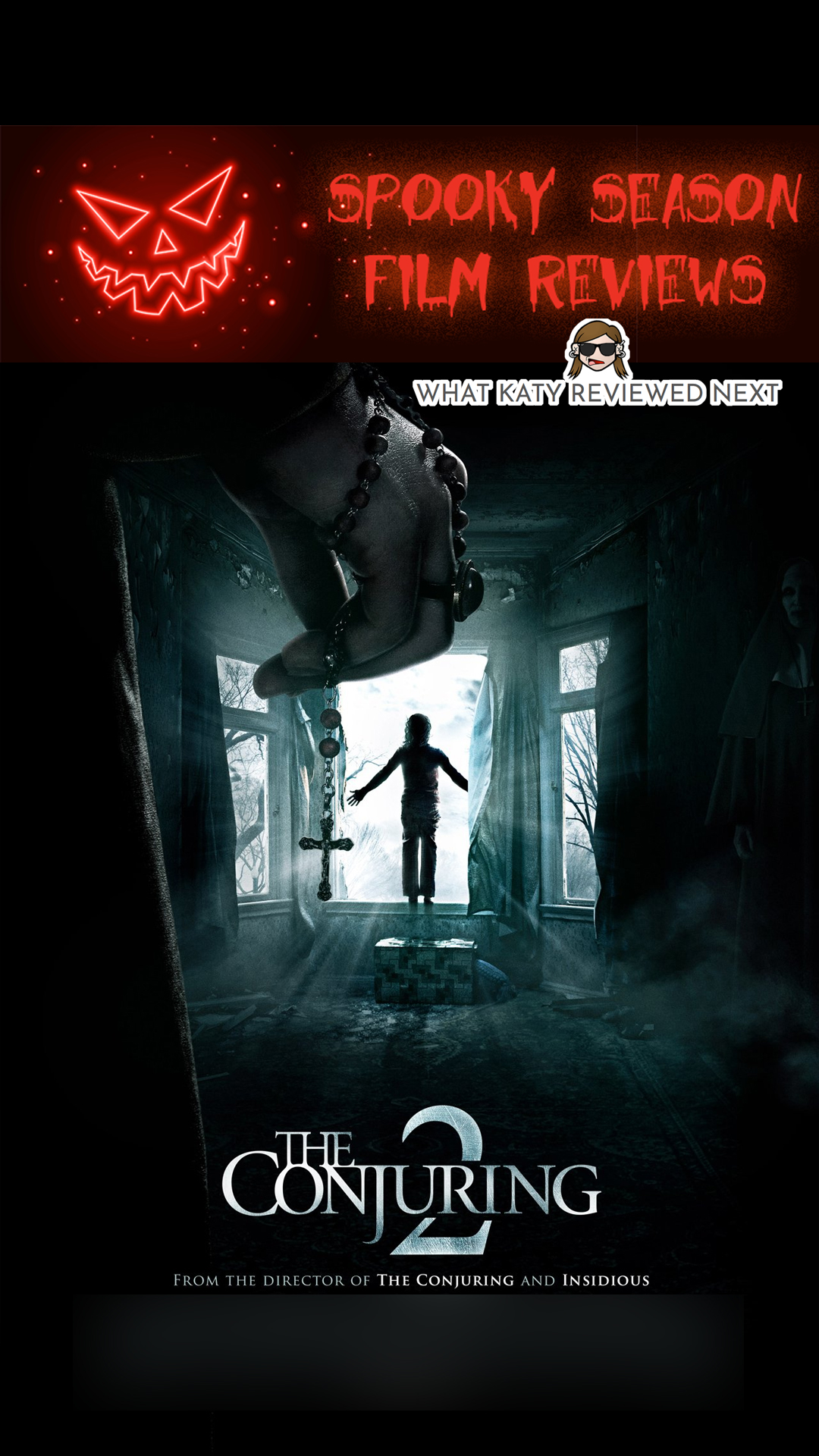 « The Conjuring
The Conjuring: The Devil Made Me Do It »
Katy Whitton https://www.facebook.com/WhatKatyReviewedNext/
2021-08-10GMT+010023:07:36280What Katy RevIewed Next
Ed and Lorraine Warren travel to North London to help a single mother raising 4 children alone in a house plagued by a supernatural... 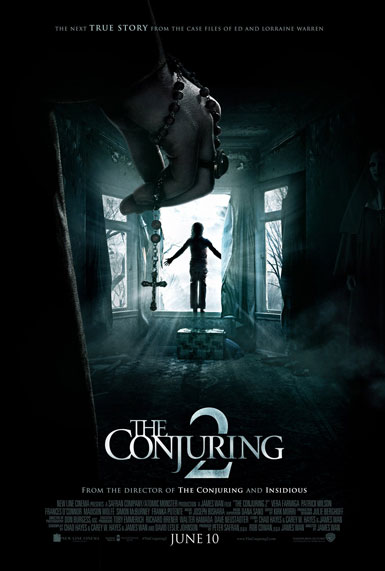 Overview: Ed and Lorraine Warren travel to North London to help a single mother raising 4 children alone in a house plagued by a supernatural spirit.

When The Conjuring 2 opens, we go back to check up on the Peronns who we met in The Conjuring, right? Nope. Not at all. We don’t care about them, they could all be trapped in that cursed wardrobe for all the writers care.

No, in the excitingly named The Conjuring 2 we’re taken to England, Enfield in North London to be more precise, where all it seems to do is rain and everyone is super miserable.

We’re introduced to the Hodgson family, they’re your typical “Make do and mend” family who manage to scrape by after the father leaves mother Peggy (Frances O’Connor) and her four children daughters Janet (Madison Wolfe), Margaret (Lauren Esposito) and sons Johnny (Patrick McAuley) and Billy (Benjamin Haigh) to fend for themselves.

Bear in mind that this film is set (like its predecessor) in the 1970s so a single parent family through separation or divorce is pretty uncommon and would place the family further down a peg-or-two on the social scale.

My first major complaint started becoming apparent within 5 minutes or so of the film starting. What is it and how could I be annoyed so quickly you might ask? Well, let me tell you.

Frances O’Connor and Lauren Esposito both have Australian accents in real life, Madison Wolfe is American and Benjamin Haigh and Patrick McAuley, while English, can’t quite capture a London accent. Consequently I spent a lot of the film thinking “Huh? Why did that pronounce that word like that?” and it really pulled me out of the movie.

I think there should be a law that states unless you’re English, you shouldn’t be allowed to do an English accent because it just sounds rubbish. As an aside, I grew up in West London so this was particularly jarring for me, maybe if you didn’t grow up around the accent you might not notice it so much.

With that gripe vented, let’s get on with the rest of the review.

A bit like The Conjuring, I really struggled to remember which child was which so with that in mind, the film starts with the two sisters playing with a homemade Ouija board but nothing seems to be happening so they put it to one side and completely forget about it I mean, what could possibly go wrong?

A little while later (the timescales are really unclear in this film annoyingly) one of the girls wakes up to find herself on the floor of the sitting room with no idea how she got there. It’s intimated that this happens a few times so she decides to tie herself to the bed to stop what she thinks is sleepwalking but that just results in her getting tangled in the rope and ending up on the bedroom floor in the middle of the night.

While this is happening, one of the sons is seeing weird things in his tent fort that is set up on the landing, the girls are seeing figures in their bedroom but no one is there when the lights are turned on and the TV starts randomly changing channels.

This brings me on to gripe number 2. Janet (I think) is changing the TV with a remote control which she puts to one side and it suddenly moves. I am old enough to remember my first TV or video that had a remote and IT HAD A WIRE. There is no way a family of the Hodgson’s socio-economic status would have a fancy ultrasonic remote in 1977 – this would have increased the price of a TV by a third (source) and infrared remotes weren’t widely available until the 1980s.

Yes, I know that they could be renting the TV but if you look at the clothes, the state of the house and some of the comments Peggy makes she would most certainly buy food over paying for an expensive TV so either the family are more well off than the film is making out or they’re taking artistic liberty with this particular event.

I know this is nitpicking but for each thing like this that happens films lose a certain amount of credibility and you are pulled out of their reality a little more each time as you’re constantly looking for other errors or things that don’t fit the time period or narrative.

Right, moan over and back to the plot.

The children are beginning to complain about what’s going on but Peggy is convinced that they’re banding together to pull a prank on her. Things come to a head when Peggy, Janet and Margaret are in the girl’s bedroom and Peggy is yet again brushing the girl’s concerns off. During the conversation a dresser flies across the room of its own accord and smashes into the door forcing it closed.

Peggy realizes that the girls might be telling the truth (ya think?) and she and the children run out of the house and across the street to her friend’s house – FINALLY! A parent acting responsibly unlike the Peronns in the first film.

They call the police from their neighbour’s house as Peggy still isn’t 100% convinced it’s a poltergeist and thinks that it may be someone playing tricks on the family but when the police arrive they can’t find anyone in the house and then they witness furniture moving around.

In typical British Police Style the constables are like “Nope, not our problem….. byeeeeee” and basically leave the family to it. Well, it’s not a speeding ticket is it so no wonder they don’t care what’s going on.

The local press hears about the events in the house and very soon it makes national news. This captures the attention of the Society for Psychical Research who dispatch Maurice Grosse (Simon McBurney) to investigate the paranormal goings on.

It’s during the course of his investigation when Grosse is questioning Janet about what she’s seen that she becomes possessed and claims to be an old man called Bill who died in the house, this is captured on audio tape and camera film which is then passed on to the local Church to evaluate to see if the situation warrants an exorcism.

While all this is going on in dear old Blighty, the Warren’s are in America conducting investigations of their own. Lorraine (Vera Farmiga) has been seeing visions of a Nun which causes her husband Ed’s (Patrick Warren) death. After a nasty psychic run-in with the nun she scribbles her name down in her bible and that’s that (except it’s not as that is a rather important plot point).

It would seem that the Warren’s daughter also has some psychic ability as she sees the Nun-ghost in their house but this doesn’t stop the Warrens leaving her with Lorraine’s mother and jetting off to England to check out the Enfield haunting because priorities, amirite?

The Warrens arrive in England and take over the investigation (more on that later). They witness several strange events like Janet apparently being teleported into a cupboard, the cellar flooding and a roomful of crosses being turned upside down and one of the girls (not a clue which one) apparently levitating.

As with my review of the first film, I’m not going to give away too much about the ending as I don’t want to spoil it for you, but I will say that I didn’t think there were as many scares as there were in its predecessor.

I think part of this is down to the setting, the house (while unfeasibly large for a London semi-detached and I can comment as my Grandmother and a Great Aunt lived in a very similar style house) does not offer much room for exciting action but I think the use of static camera angles all from a very similar perspective doesn’t help.

I’m not suggesting that director James Wan should have gone all “Paranormal Activity” with high-angle CCTV-esque shots, but a lot of the shots are just a steady shot like he plonked the camera down and wandered off to have a sandwich after he shouted action.

While the individual room sets are small, introducing some movement to the shots would have led, in my opinion, to a more tense feeling as you wouldn’t be sure where the action was going to come from next whereas the way they’re set up makes it obvious (to me) where the “bad guy” or action is going to appear.

That aside, the film is very atmospheric and the lighting, cinematography and music manage to rescue what could have been a rather lacklustre movie – especially when comparing it to the first film.

So, let’s address my final but most major gripe: While the Enfield haunting is a true story, the events portrayed in this film are entirely fabricated. While Maurice Grosse and Guy Lyon Playfair did investigate the haunting from 1977 the Warrens only had a very small role in the investigation and briefly visited the house in 1978 – according to Lyon Playfair they “only showed up for a day”. You can read more about the discrepancies here (spoilers, obviously).

Years later, Janet confessed to making up some of the faked events such as bending spoons and banging on the ceiling with a broom and it’s refreshing to see that the film covers this – albeit in a slightly skewed manner to fit their narrative.

So, my final verdict? I preferred the first film over this one. The Conjuring 2 felt like it was merely cashing in on the success of the first movie which made $317,744,402 off a budget of $20 million. Interestingly, The Conjuring 2 had double the budget ($40 million) and “only” made around $310,201,399 so a bigger budget doesn’t necessarily mean bigger profits.

The film is fine as a standalone film, but I don’t think it adds anything to the franchise in terms of character development and all it really does is introduce us to The Nun who appears in another spin-off film (is that a cash register I hear kerchinging?)

I would highly recommend that you check out the mini-series The Enfield Haunting which, as far as I can tell, is much truer to the actual events that are supposed to have happened. You can watch The Enfield Haunting on Sky Go or purchase it on Amazon (Prime and DVD – affiliate link)

Watch this film if you like listening to non-English people attempt to do a semi-Cockney accent and failing miserably.

Let us know your thoughts on "The Conjuring 2"