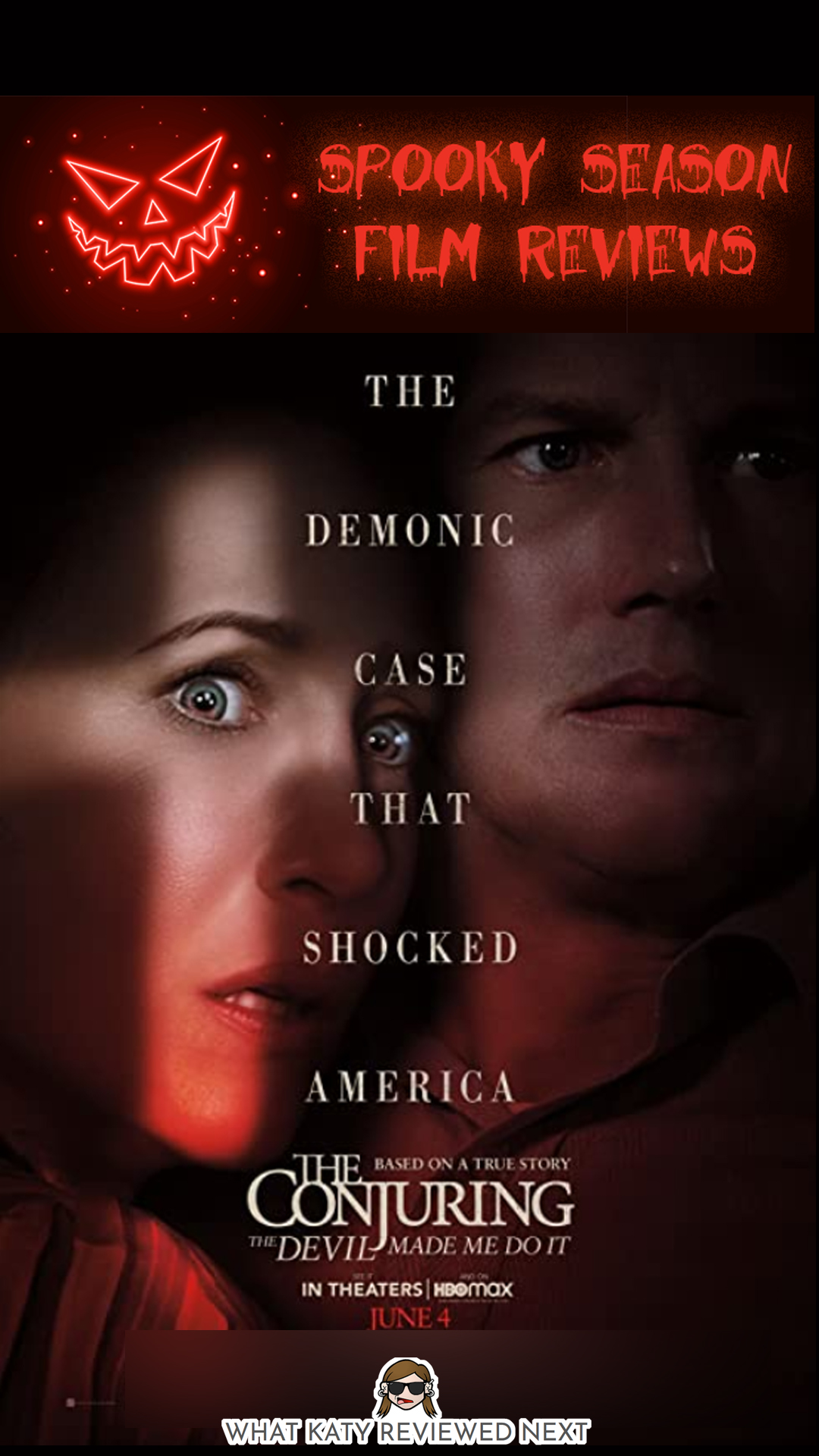 « The Conjuring 2
Event Horizon »
Katy Whitton https://www.facebook.com/WhatKatyReviewedNext/
2021-10-10GMT+01004:37:13282What Katy RevIewed Next
When the Warrens are called in document an exorcism they are drawn into a satanic mystery that they must solve in order to save a young man from the death...

The Conjuring: The Devil Made Me Do It Movie Review 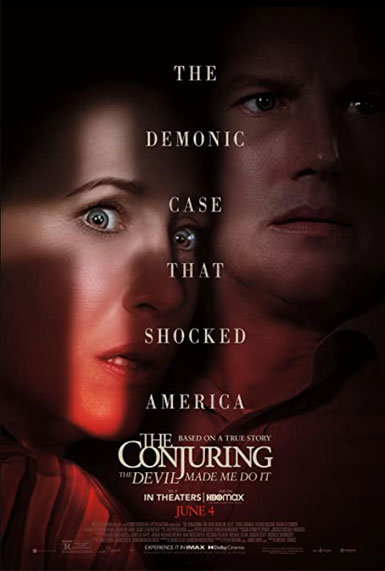 Overview: When the Warrens are called in document an exorcism they are drawn into a satanic mystery that they must solve in order to save a young man from the death penalty.

The third film in “The Conjuring” series (and what feels like the billionth in The Conjuring universe – JK, there are currently 8) opens with the exterior shot of an idyllic looking house but when we move to the inside it is anything but.

There is a broken chandelier, deep gouges along the walls and chairs and other items thrown everywhere – all is obviously not well in this house.

A title card places us in July 1981 and the Warrens have been called to in the home of 8-year-old David Glatzel in order to document the boys exorcism.

The Priest is running late – I mean, it’s just the exorcism of an 8-year-old boy, who needs to be on time for that? And when he gets out of the taxi (HE TAKES A TAXI TO AN EXORCISM???!!!) he stands in front of the house in what some have called a homage to The Exorcist, but I call a rip off – see for yourself and let me know in the comments if you think it’s a loving throwback or someone struggling to be novel: 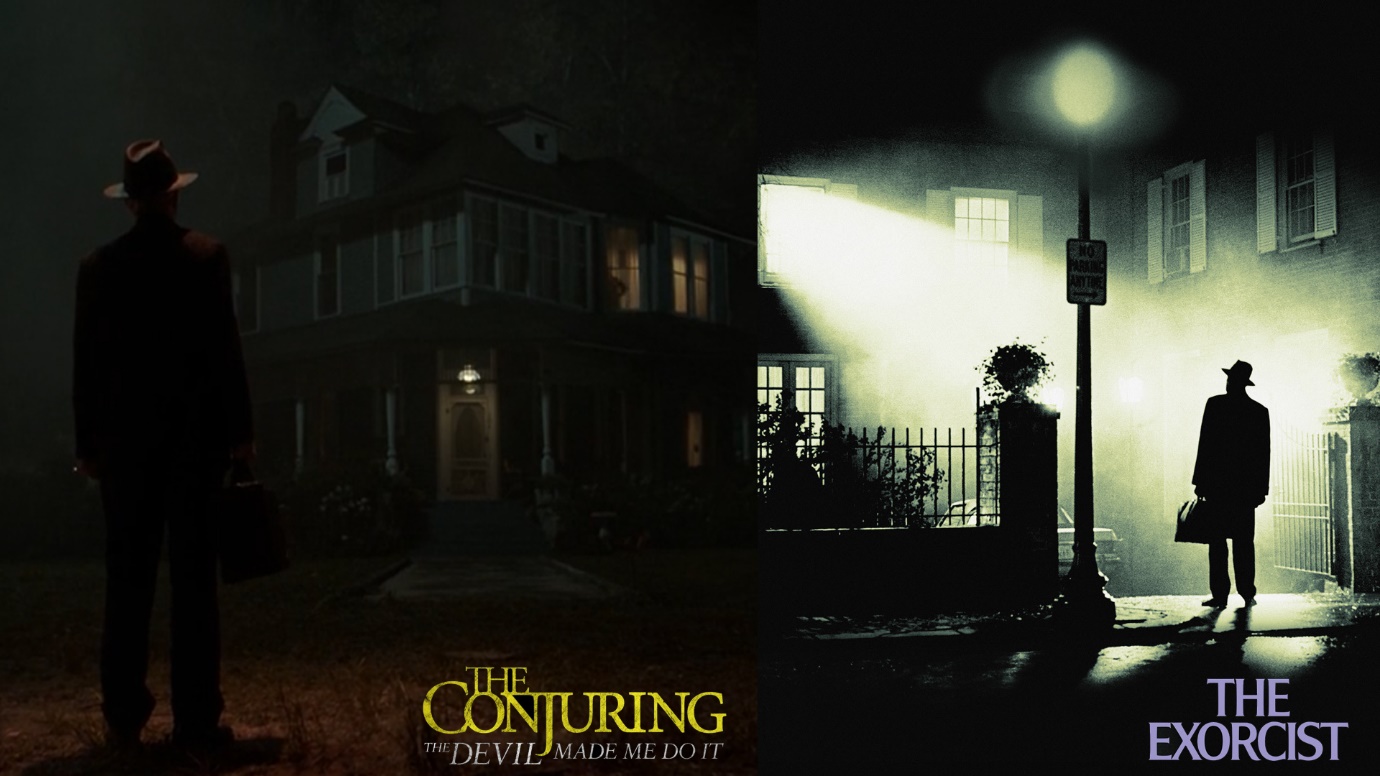 David (Julian Hilliard) is waiting in his bedroom for the Priest to arrive because why would you keep him with family members so they can keep an eye on him and make sure he’s okay even though he’s apparently possessed by a demon? A loud banging starts which drives David out of his bed and into the bathroom where he hides in the tub.

It’s at this point I noticed how different the directorial choices are in this movie. James Wan (Saw, Insidious, Aquaman) who directed the previous two films is replaced by Michel Chaves (The Curse of La Lloronam which is part of the expanded Conjuring universe).

I have mentioned in my previous reviews that I felt Wan’s directorial style was a bit too static (especially in The Conjuring 2) but Chaves is the complete opposite. The shot choices he makes (and shout out to editors Peter Gvozdas and Christian Wagner) while David in the bathtub are magnificent, they really drive what could have been a rather boring and rather stagnant scene into something that is scary and exceptionally well filmed.

It’s a shame the scene is slightly marred by yet another rip-off, this time Carrie – am I reading too much into this? Let me know in the comments. 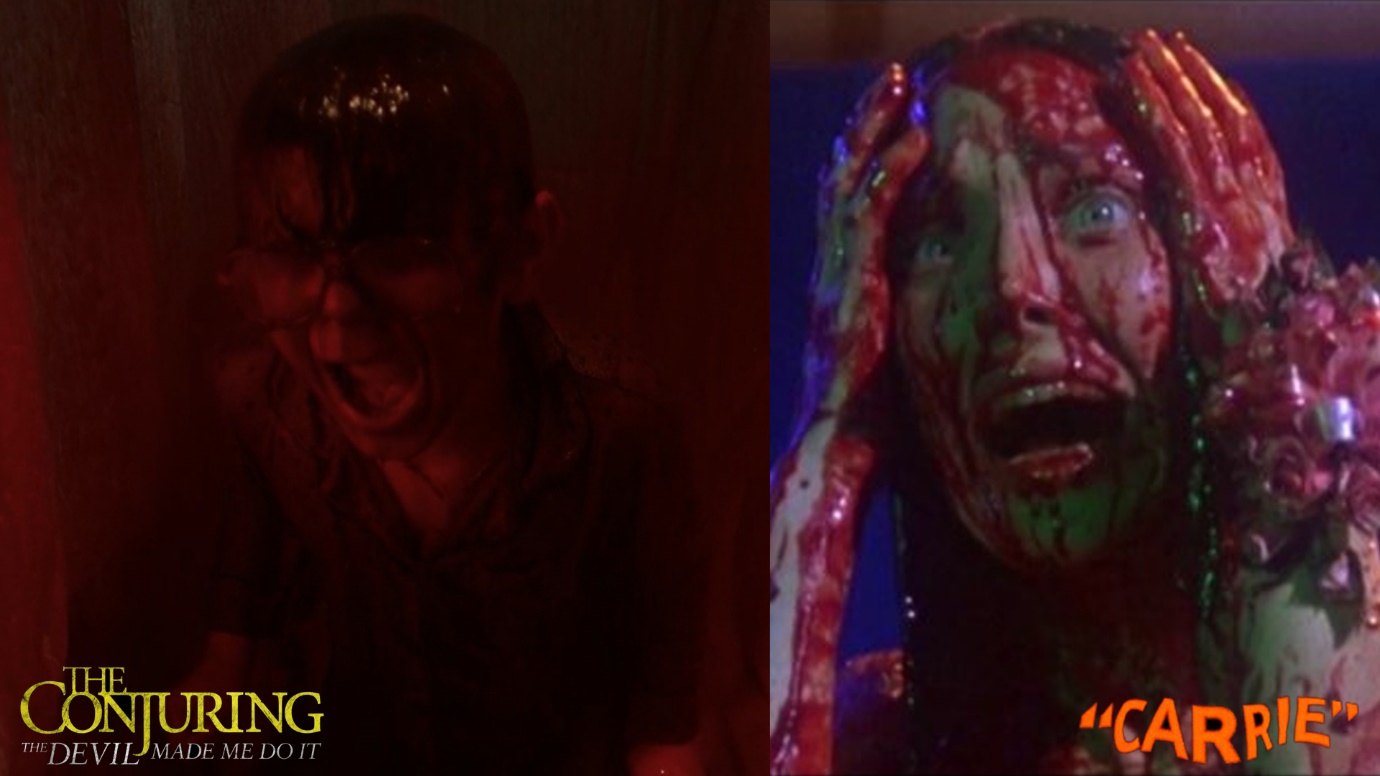 I could, throughout the course of the film, make many more comparisons between The Conjuring: The Devil Made Me Do It and other horror films. I am really torn between these being loving callbacks to films that Chaves wants to introduce to new audiences, a bit of laziness on his part or the fact I watch far too many movies – who knows. Anyway, on with the review.

The family clean David up and get him downstairs and on to the dining room table because that’s obviously the best place to conduct an exorcism, right? Bed? Nah! Chair? Why? Table? For sure! The exorcism scene is AMAZING, I had to look up how they filmed it as I couldn’t understand how the special effects were so seamless – it turns out there weren’t any! They used a contortionist to film all of the shots of David going through the exorcism so what you see is a real live person putting themselves into those positions. WOW.

During the exorcism, the Priest is knocked out and Lorraine (Vera Farmiga) and Ed (Patrick Wilson) are incapacitated so it’s up to David’s sister’s boyfriend Arne (Ruairi O’Connor) to try and save David which he does by inviting the demon into him and to leave David alone. All of a sudden everything calms down and everyone (bar Ed who is unconscious) thinks that the exorcism was a success and that the danger has passed.

Ed is taken to hospital where it’s revealed he has had a heart attack and need a stent fitted and after surgery will need to take it easy for a while – that’s really going to happen, isn’t it?!

Meanwhile, Arne is with his girlfriend Debbie (Sarah Catherine Hook). Unusually for him, he’s slept in late but otherwise seems fine that is until he sees a strangely severe looking lady who attacks him and then disappears.

Arne goes to work where throughout the day he gradually feels more and more ill. After almost having a rather nasty accident with a chainsaw he returns home where he’s immediately grabbed by his landlord who wants to Arne to fix his record player and have a few beers.

Arne starts to have visions where the landlord turns into a demon-like figure who is stalking and then attacking Debbie, it’s at this point that Ed awakes and is able to tell Lorraine that the demon isn’t gone and instead moved from David to Arne and that they’re all in trouble.

Lorraine calls the police who rush to Arne and Debbie’s flat but before they can get there they see Arne walking down the road covered in blood saying “I think I may have hurt someone”.

Arne is arrested for the murder if his landlord (he didn’t hurt Debbie at all) and the Warrens try to convince his defence attorney to enter a not guilt plea due to “demon possession”. Arne’s lawyer finds the suggestion ludicrous but after a visit to the Warren’s house where she’s introduced (off screen) to the doll Annabelle, she enters the plea much to the shock of the court.

The Warrens are now in a race against time to prove that Arne is innocent and to find out how the demon possessed David in the first place. During the course of their investigation, they find out that all is not as it seems and there are dark and sinister forces at work

As with my previous reviews, I’m not going to give the ending away but guess what? We have a flashback to the family moving into the house (sound familiar) and the HOUSE ALREADY HAS FURNITURE IN IT! Please, for the love of whomever you believe in, do not buy a house that already contains furniture! Look at what happens – although it’s not technically the furniture that causes the in this film it’s still worth being wary of it.

I’m going to go out on a limb and say that this is my favourite film of the series so far. While it’s a bit slow paced at points, it’s really helped by a lot of different locations. In the first two films we were pretty much stuck in one location, but here we have the house, another house, a flat, a wood, a morgue and a prison. Variety is the spice of life!

As I mentioned before, I found the directing a lot more dynamic that the previous two entries in the series, the cinematography editing is fantastic, and the sound design is amazing. There are some really cleverly put together scenes that had me literally going “Wow” at the screen.

The film does fall into the trap of some of the usual cinema tropes such as the female lead can’t be too strong and will need a man to save her (even though he’s just had a heart attack) and if someone looks a bit dodgy, they probably are.

It’s definitely not the best possession horror film out there but it can certainly hold its own and while there are a couple of throwbacks to the previous two films and nods to other movies in The Conjuring universe it works perfectly as a stand-alone film.

Watch this film if you have had a terrible landlord and wish you had the excuse of demonic possession in order to get your own back on them.

Let us know your thoughts on "The Conjuring: The Devil Made Me Do It"