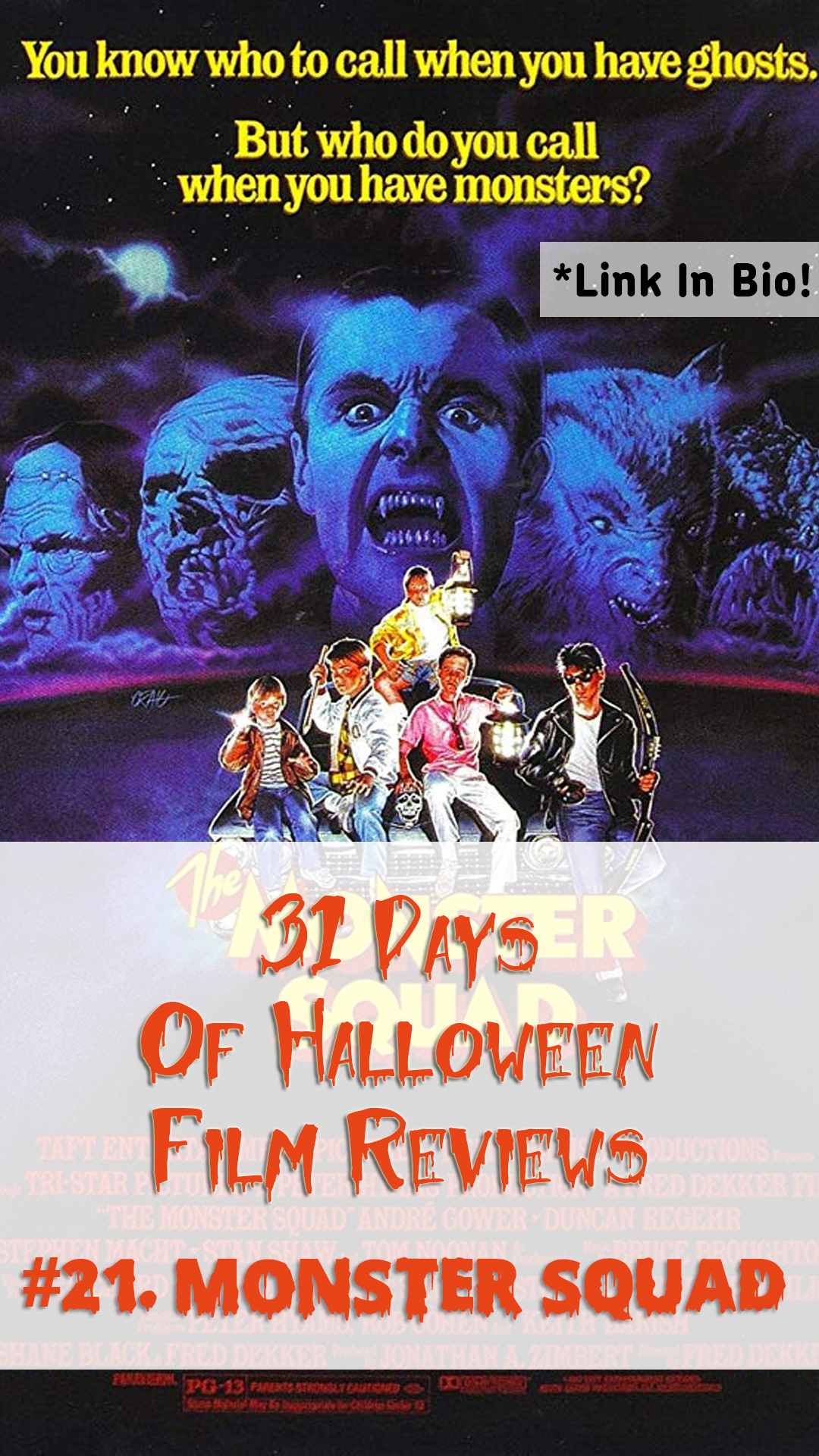 « Bram Stoker’s Dracula
Scary Stories To Tell In The Dark »
Katy Whitton https://www.facebook.com/WhatKatyReviewedNext/
2019-21-10GMT+010010:00:34293What Katy RevIewed Next
This review is part of the 31 Films For Halloween Series The Monster Squad holds a special place in my heart; I remember watching it in the late 1980s (yes, I am that old) and thinking how great it... 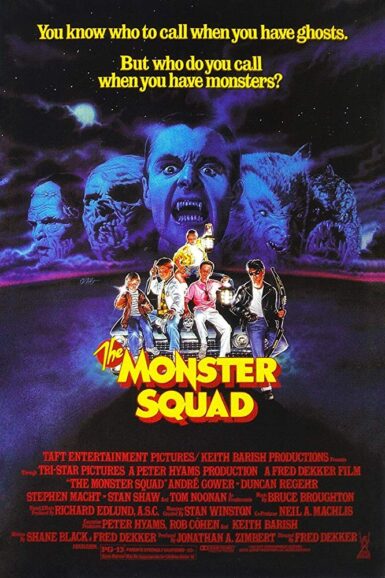 Overview: This review is part of the 31 Films For Halloween Series The Monster Squad holds a special place in my heart; I remember watching it in the late 1980s (yes, I am that old) and thinking how great it was that kids were able to fight monsters for a change instead of just the adults. […]

The Monster Squad holds a special place in my heart; I remember watching it in the late 1980s (yes, I am that old) and thinking how great it was that kids were able to fight monsters for a change instead of just the adults.

The film opens back in ye olde times with a bunch of grown-ups storming Dracula’s castle. A glowing talisman sits in the end of the room and a young girl is forced to read an ancient text in front of it, unfortunately she doesn’t finish the text in time and they all get sucked into a vortex.

We then fast forward to the “current day” (current meaning the 1980s) and are introduced to Sean and Patrick, two young boys who prefer to draw pictures of monsters rather than study in science class: “Monsters aren’t real, science is” says the principle who is telling them off, “We don’t know that, Sir” says one of the boys.

Then we cut to the school playground where two boys are taunting “Fat Kid”. Yes, his character is introduced as “Fat Kid” (which is much better than his real name which is Horace) – what is it with these Eighties and early Nineties films that find it acceptable to mock larger children? I guess it’s a product of its time but it’s quite uncomfortable to watch and not amusing (which I’m sure my 9 year old self would have thought it was.)

Fat Kid, sorry I mean Horace, is getting the crap beaten out of him when teenage cool kid Rudy rocks up on his chopper, he lights a cigarette by striking a match on his show – wow! I’m pretty sure he’s the sole reason I started smoking you know.

Rudy calls off the two bullies and says that Horace is his friend making bully #1 eat Horace’s chocolate bar that’s fallen on the floor. Bravo to Rudy but I really don’t see why or how he could possibly be friends with Horace, let alone stick with him after the rescue, meet up with Horace’s friends and then agree to join their monster club. I mean, if the kid’s way too cool for school, surely he’s too cool for a dorky club run by 3 losers and one of their baby sisters, a young boy and a beagle.

We then cut to a plane (there’s a lot of cutting in the first 30 minutes of the film) and the pilot is whining about hauling dead people around, there’s a noise from the back of the plane and when he goes to investigate he’s attacked by Dracula who escapes through the cargo bay doors by turning into a bat. Quite handily they jettison a coffin from the plane and it lands unscathed in a swamp. Later on, somehow Dracula’s able to get himself a hearse with a cool skull hood ornament (point of order: how does he know what a car or a plane is when the inference is he’s been buried for some time?) and drives to a hill overlooking the city where he stands and ominously says “Let it begin…” I was a bit disappointed there wasn’t a “Muahahahahahaha” laugh at the end but we can’t have everything can we?

Cut to the police station where a guy is shouting that he wants to be locked up as he’s a werewolf. He spies the moon and goes mad, throwing cops around and grabbing one of their guns screaming “Lock me up”.

Cut (again) to the local museum where Sean’s policeman dad has been called in to a robbery where a mummy has gone missing. “2000 year old men don’t get up and walk away by themselves” he says in voiceover as we the mummy dragging itself down the street.

The guy claiming to be the werewolf has been shot by the cops (not surprising) and is being transported in a coroner’s van when he transforms into an actual werewolf and attacks the driver before escaping and meeting up with Dracula and the Mummy in a very foggy forest. They walk through the woods to the swamp we saw earlier and Dracula channels his inner Yoda and starts lifting the coffin out of the water. The process is sped up by “Gillman” (I guess the couldn’t use Swamp Thing or the Creature from the Black Lagoon for copyright reasons or something) who lifts the coffin out of the swamp and tosses it on shore where we can see the words “Frankenstein” stamped all over it. I wonder what on Earth could be in there? Dracula charges up Frankenstein’s Monster (I’m just going to call him Frankie from now on, okay?) using a lightning rod hidden in his cane (how handy).

Sean calls the Monster Squad together and tells them that he thinks there are monsters roaming around killing people and that there is a werewolf, mummy and Dracula on the lose. He’s been given a copy of Van Helsing’s diary which his Mum found in a house nearby (what a coincidence) and they go to “Scary German Guy’s” house so that he can translate the diary for them. Dracula, realising that the diary is in Sean’s possession, sends Frankie to find the children and get the diary back.

Scary German Guy (who, spoiler alert, isn’t scary) translates the diary and it turns out that every 100 years the balance of Good and Evil are aligned. If you have a special amulet you can conjure a portal to limbo and suck evil into it for good. It just so happens that the following day is the 100 year anniversary of Van Helsing’s attempt to get rid of evil – what another coincidence!

Sean’s sister Phoebe befriends Frankenstein’s monster so that she’s allowed to join the boys only Monster Squad – I’d say they were being sexist but as she’s only 5 I think they’re just being sensible. She teaches him to speak (he can say “bogus” and “gimme a break” so he’s a great conversationalist) and they form quite a touching relationship. Accepted by the group he seems to have forgotten all about stealing the diary back for Dracula.

There’s a typical 1980s montage scene where the kids are preparing for the upcoming portal opening. Rudy seems to be the only one actually doing anything as he’s making stakes, silver bullets and stealing bows; One kid is writing to the “army guys”; Sean seems to be making business cards and what the others are doing who knows.

While all this is going on, unknown to the Monster Squad, Dracula already has found the amulet but can’t get to it as it’s protected so he plans on using the kids to get it for him.

As well as Fat Shaming, this film also has its fair share of sexism and slut shaming as well. Patrick’s sister (and that’s all she’s known as, she doesn’t even have a character name) is photographed in her own home getting undressed and this is used to blackmail her into admitting she’s a virgin so she can read the ritual that will open the portal to limbo. The ritual fails as a) she is truly terrible at German and b) she’s not a virgin. What a slag!

The last 20 minutes of the film is the kids battling the monsters better than the parents (they’re the Monster Squad after all) and trying to open the portal to Limbo to stop Dracula’s rein of terror.

Can they succeed without a virgin? Who will step up and help them in their hour of need? You’ll need to watch to find out!

Despite the film being centred around a cast of kids, this film was rated 15 by the BBFC so it’s not suitable for younger children. Yes, I know at the start of this article I said I watched it in the 1980s – I’m not that old, I was around 9 and had a very lenient Mum when it came to video choices – I certainly wouldn’t recommend it for children under 12 due to the fact it references virgins a lot (do you want to have the birds and the bees conversation thanks to this film?) and there’s quite a lot of violence in the end fight scene: Wolfman’s blown to smithereens (not a spoiler as only silver bullets can kill a werewolf as we all know) and one cop gets his head crushed by Gillman which, while not graphic, is gross.

All in all, this is a fun if dated comedy. It would have been a bit better if the sex and violence were toned down in order for it to get a PG rating, that way it would have reached its target age group. In the USA it was given a PG-13 rating which is equivalent to the current UK 12A rating however, that rating wasn’t introduced into the UK until the early 2000s so the film could only be released here as a 15 back in 1987 which knocked it’s box office appeal somewhat.

Fun fact: If I were to root around in my living room cupboard right now, I’d find the original VHS release that we bought in the late 1980s! Shame I can’t remember where I put my video player, eh?

Watch this film if you want to see a werewolf get kicked in the nards (and check out the 2018 documentary about how the film became a cult classic while you’re at it).