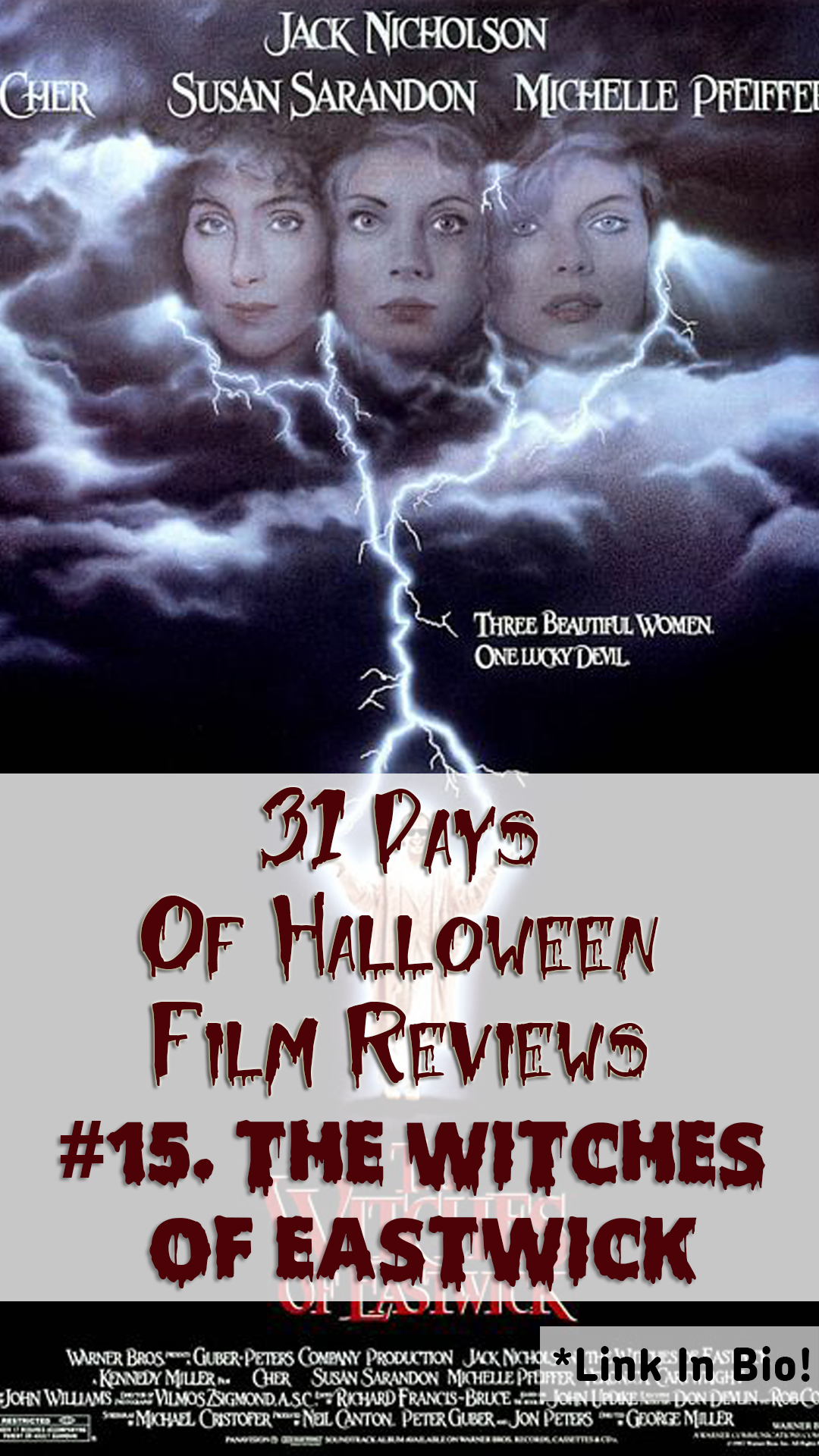 « Casper
Practical Magic »
Katy Whitton https://www.facebook.com/WhatKatyReviewedNext/
2019-15-10GMT+010015:00:02287What Katy RevIewed Next
This review is part of the 31 Films For Halloween Series The Witches Of Eastwick is one of those films that when you first watch it makes you go “huh?” and then on subsequent rewatches...

The Witches Of Eastwick Movie Review 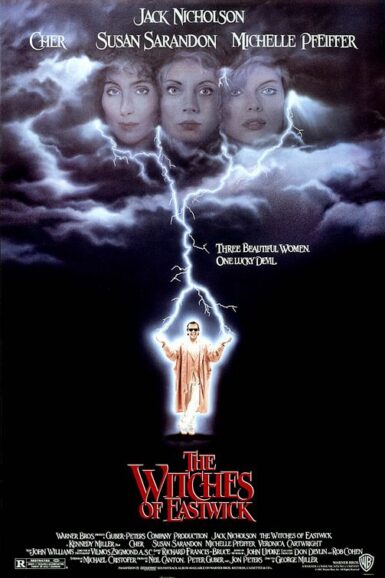 Overview: This review is part of the 31 Films For Halloween Series The Witches Of Eastwick is one of those films that when you first watch it makes you go “huh?” and then on subsequent rewatches makes you go “Oh! I get it!” The more you watch this film, the more you will see and understand […]

The Witches Of Eastwick is one of those films that when you first watch it makes you go “huh?” and then on subsequent rewatches makes you go “Oh! I get it!” The more you watch this film, the more you will see and understand which I have to say is quite unusual for a film made after 1980 (personal opinion, of course!).

The cast is stellar – Jack Nicholson, Cher, Susan Sarandon and Michelle Pfeiffer, I mean you know this is going to be great from the get-go, right?

Sarandon plays Jane, a sexually repressed and sexually harassed (by the Principal) school music teacher; Cher is sensual widowed artist Alexandra and Pfeiffer is Sukie, a separated put-upon mother of 6. The women are close thanks to their shared experiences of love, loss and dealing with small town life and they share an intimate bond with each other – one that will shape the events to come and change their lives forever.

During a school speech by the principal the ladies are together and the skies darken and it starts to storm, when they get meet later they all reveal that they were thinking that the principal is an arse-hat and they wanted the speech to be over. Only Sukie sees any significance in this and the other two brush off her concerns. They then drink cocktails and start to describe their perfect man – each giving character attributes that they find attractive: someone nice, someone with a brain that you can talk to, someone who you can be yourself with. Emboldened by cocktails the list is quite extensive and it’s obvious that no one man can exist that would satisfy these 3 ladies needs…. or is there?

As the women are discussing their desires there’s s montage of a car driving in to town – could this be their mystery man? Well, what do you think? I would be a short film if it wasn’t!

Sukie works for the local paper and has been tasked with writing a piece in their new resident, the weird thing is she’s been told his name several times and she can’t remember it – and neither can anyone else that has dealt with him.

At a classical quartet performance by Jane, the set is rudely interrupted by someone snoring – the noises don’t sound human and they’re more like an animal snarling than someone who’s bored with the concert. The sleeping beauty is the newcomer to town and no-one can remember his name, eventually Sukie gets it – Daryl Van Horne – and this sets off an odd set of events that culminate in the newspaper editor’s wife falling down the stairs. Why did she fall? She knows something’s off about Van Horne so we guess it’s no accident.

A couple of days later Alex rides out to Van Horne’s estate to snoop around a bit. He’s bought a load of her sculptures and she wants to know why. She has lunch with Van Horne and when he asks her to have sex (he likes a little pussy after lunch apparently) she lays into him in a wonderfully acted and timed speech telling him that he’s unattractive, loathsome, vile, repulsive and smelly – it’s worth just watching the film for this bit of acting to be honest!

As Alex is leaving, Daryl pulls her up and sets her life out for her: clean the house today and you need to clean up again tomorrow, her kid will be asleep doing her homework, there’s no one waiting for her. He makes her see how boring her life is and she falls for his charms.

Van Horne then turns his sights on Jane and turns up at her house on the premise of playing violin with her (she’s a cellist), one thing leads to another and they end up in bed. Finally, after a game of tennis where the ball behaves weirdly, Van Horne sets his sights on Sukie and pretty soon she’s been wooed by him too.

As the time goes on, people start to talk about the goings on at the Van Horne residence. Sukie is fired and her kids are being told their mother is a “dyke”, Jane loses a lot of her private music students and they’re generally not welcome in town. The trio decide to distance themselves from Van Horne until things calm down but this split isn’t an easy one and Daryl starts to show his true nature – with disturbing results.

I’m not going to spoil the surprise twist of who/what Van Horne really is, you’ll need to watch the film for yourself and make your own mind up about him but I will say that I can’t think of anyone other than Jack Nicholson playing the character so wonderfully.

Watch this if you’re in the mood for some frightening feminist fun.

The Nightmare Before Christmas
Tagged With:  Comedy | Fantasy | Horror | Magic