Skip to content
« BeetleJuice
Halloween III: Season Of The Witch »
Katy Whitton https://www.facebook.com/WhatKatyReviewedNext/
2019-11-10GMT+010015:57:36283What Katy RevIewed Next
Bored with celebrating Halloween year after year, Jack Skellington feel stuck in a rut. After a walk through the woods he discocers Christmas Land and decides to take over as the King of Christmas...

The Nightmare Before Christmas Movie Review 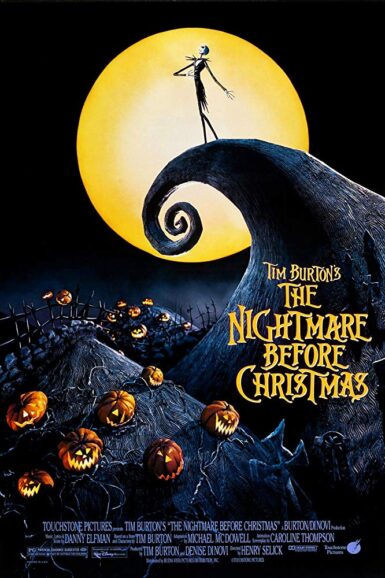 Overview: Bored with celebrating Halloween year after year, Jack Skellington feel stuck in a rut. After a walk through the woods he discocers Christmas Land and decides to take over as the King of Christmas from Sandy Claws. Unfortunately things don't go well for Jack when Halloween and Christmas collide.

While the title maybe “The Nightmare Before Christmas”, this is a film that can be watched at Halloween too!

The film is a stop-motion animation masterpiece from the mind of Tim Burton with music supplied by the always wonderful Danny Elfman.

We open with a parade through Halloween Town, a spooky place filled with odd looking inhabitants like a clown that can take its face off, a mad scientist in an electric wheelchair who has the perfect “duck face” and a two-faced mood swinging mayor. The parade is in honour of Halloween and is headed by the Pumpkin King Jack Skellington.

After the parade is over, Jack takes a walk with his ghost-dog named Zero. He’s becoming tired of Halloween as it’s the same thing year after year. He longs for something different, something more exciting – and he’s about to get his wish. Jack keeps walking all night and comes across a clearing with 7 trees in it, all with strange symbols on: A shamrock, a decorated egg, a turkey, a heart, fireworks, a pumpkin and a decorated tree. Each symbol is a portal to another world and it’s the tree that captivates Skellington the most and he opens the door only to get sucked through it in a whirlwind of snowflakes.

He lands on a snowcovered mountain, a town below him lit up with fairy lights and filled with children throwing snowballs instead of heads. Jack goes exploring and is in awe of how happy they are, meanwhile in Halloween Town they’re worried that Jack has been missing and there’s only 364 days left to get ready for Halloween.

The switch between Christmas Land and Halloween Town is a interesting one stylistically. Christmas Town is warm and colourful, filled with reds and greens. The lighting is bright and it’s inhabitants have rounded features and the buildings are smooth. By contrast, Halloween Town is dark, everything is in muted shades of greys and browns and its inhabitants are sharp and angular as are its buildings.

Jack returns to Halloween town with a sleigh full of Christmas goodies. The residents aren’t sure what to make of these treats that don’t bite or scare but agree that Christmas sounds like a nice holiday, especially when Jack tells them that the leader of Christmas Land is called Sandy Claws.

Jack becomes obsessed with Christmas and tries to understand how the toys and decorations work. When he tries to recreate them something always goes wrong – a paper snowflake turns into a spider-shaped one, mini-trees burst into flames. He then has an epiphany and ropes the hole town into helping him create the perfect “jolly” Christmas. Only Sally, an opressed rag doll, thinks this is a bad idea and comes up with a plan to stop Jack but she fails.

Jack sets off and delivers his toys across the world and, while he means well, they cause mayhem and destruction in some scenes that are quite amusing. Jack’s heart was in the right place, he just needed to come to the realisation that he is the King of Halloween and and needs to stick to what he knows, he then sets off to rescue Sandy Claws, Sally and save Christmas.

This is a great film, the stop-motion animation is smooth, the score is wonderful and the lyrics are clever and catchy.

Watch this film if you’re in the mood for something animated that’s not all this modern CGI stuff, or are looking for some dark humour to brighten your day.

Let us know your thoughts on "The Nightmare Before Christmas"