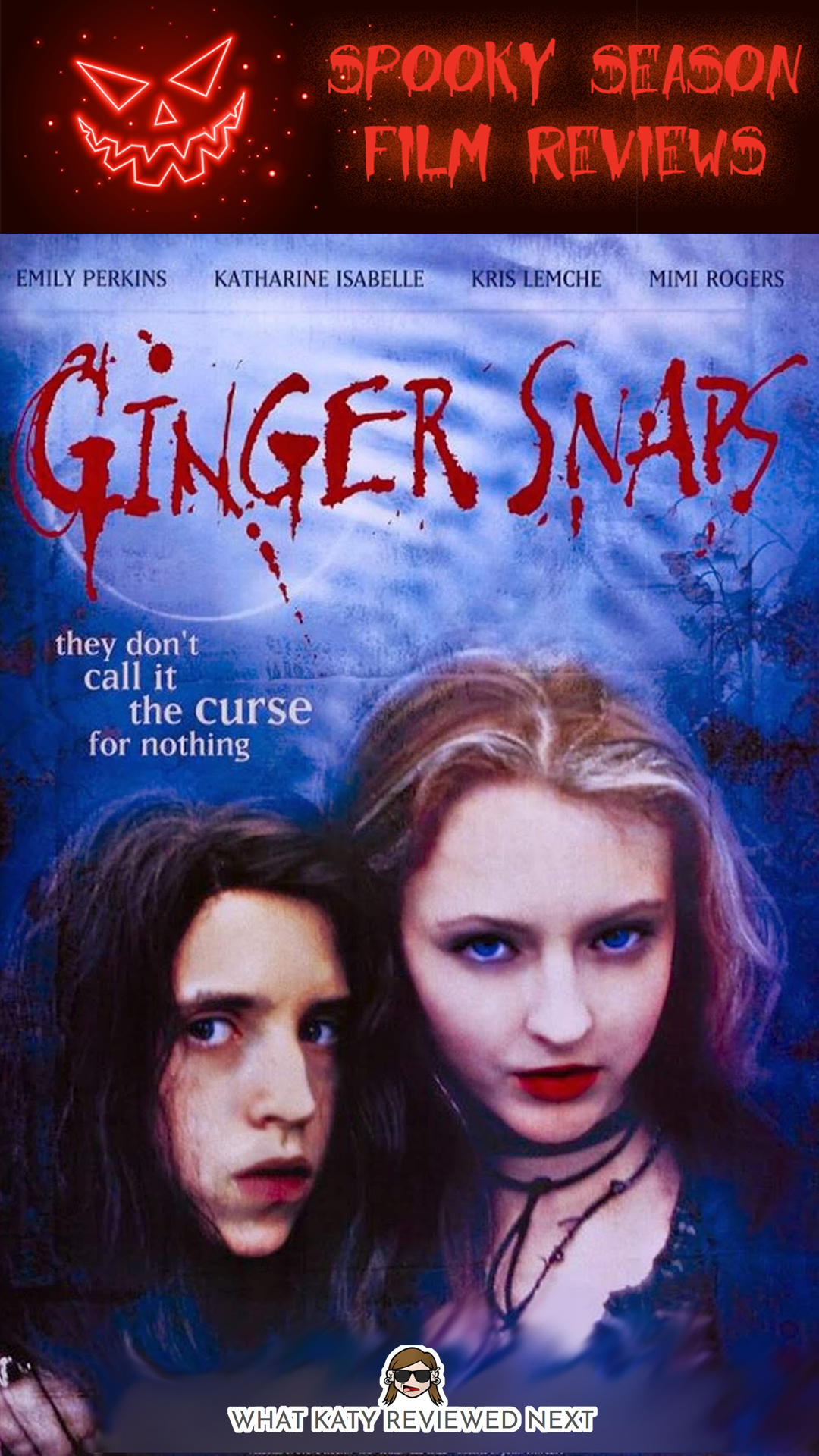 « Halloween Kills
The Ring »
Katy Whitton https://www.facebook.com/WhatKatyReviewedNext/
2021-18-10GMT+01005:35:41290What Katy RevIewed Next
Following a series of animal attacks, Ginger is set upon by an unknown beast. As the full moon approaches she begins to change. Can her sister save her from the monster... 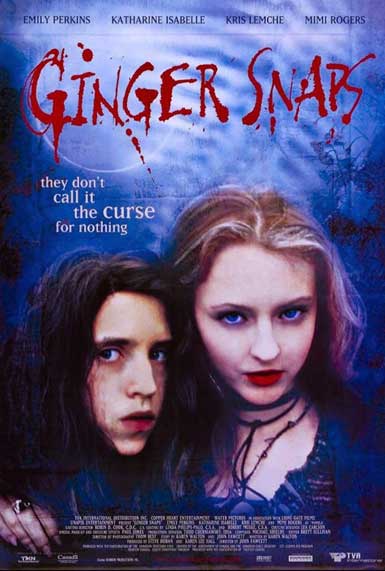 Overview: Following a series of animal attacks, Ginger is set upon by an unknown beast. As the full moon approaches she begins to change. Can her sister save her from the monster within?

Ginger Snaps is a massively underrated horror film that deserves to be seen by a much wider audience. Made in 2000, it manages to avoid falling into the “teen drama” cycle of Buffy The Vampire Slayer and The Craft and combine the horrors of high school with the horror of the supernatural in an adult manner with added teenage sass.

When the film opens, we’re shown the town of Bailey Downs (also the town name in A Christmas Horror Story), a picturesque looking suburban town where all the houses are in neat little rows and have tidy gardens. All is not as it seems though as we are shown a young boy with his back to the camera playing in a sandpit, when his mother approaches, she notices he has blood on his face and is holding what seems to be the paw of an animal. It turns out that the paw belongs to the family dog that has been ripped to shreds while it was chained to its kennel.

We are then introduced to the titular Ginger (Katharine Isabelle) and her sister Brigitte (Emily Perkins). Both kids are, to put it mildly, really odd. They enjoy taking macabre photos of fake death scenes which include demise by garage door, garden fork and, quite inventively, a lawn mower. I’m going to add a content warning for this as some of the death shots are quite realistic but if you skip through the opening credits you’ll miss them.

These photos were taken for a school project called “Life In Bailey Downs”, it seems that the girls have taken it upon themselves to do the opposite of what the assignment was earning them a trip to the guidance counsellor’s office and also serves to cement their weirdness amongst their peers.

The girl’s high school is plagued with the usual stereotypes: there’s Jason the stud-wannabe, bully Trina and drug seller Sam (Kris Lemche) and while these characters could fall into the usual tropes and niches these roles seem to project, they are all nicely fleshed out which gives them a three-dimensionality that is sometimes missing in films of this nature.

During hockey practice, Brigitte is being picked on by Trina, she’s shoved and falls over the carcass of another dead dog. The school kids talk about the “Beast of Bailey Downs” striking again but none of them seem overly worried as the thought is that it’s just a stray dog or even a bear that might be carrying out the attacks.

Ginger and Brigitte’s weirdness is somewhat explained by their odd home life. Their mother (Mimi Rogers) is extremely happy and bubbly to the point it’s being forced, like she’s escaped from Stepford although she does throw some shade at her husband. While she doesn’t necessarily agree with her daughter’s attitude she allows them to have a pretty much free reign although she asks them to stay in at night due to the animal attacks. Being surly teenagers they of course ignore this request and head out to go and kidnap Trina’s dog in order to fake its death and photograph it so they can upset their high school nemesis.

Crossing through the park, they come across yet another dead dog and on inspecting the body they realise it’s still warm so whatever tore it to shreds must still be nearby. Ginger has been feeling a bit weird and crampy all day so of course it’s at this point in time her body decides to be a complete bitch and start her period right in the middle of a field with nary a sanitary product in sight.

I’m going to go on a little tangent here because this is something that really annoys me: what is it with films using periods as some kind of plot device? I get it, their body is changing, hormones are all over the place and it’s a confusing and emotional time but is it really necessary? We have Ginger Snaps, The Craft: Legacy and going back to probably the origin of them all Carrie (and I’m sure there are more – let me know in the comments) that all use this perfectly natural event to derail a young person’s life.

Writers seem to use a someone’s menstrual cycle starting as the catalyst for events that (usually) turn out rather badly. The problem with this plot device is that there really isn’t a male equivalent, is there? You don’t see someone being attacked by a rabid beast because they got an accidental stiffy or turn into a telekinetic monster because they had a nocturnal emission, do you?

Anyway, rant about representation of menstruation (rhyme) on screen over, back to the review.

Without warning, Ginger is attacked – presumably because she is bleeding – and dragged off into some trees, Brigitte gives chase and finds her sister being mauled by a large beast which she manages to fend off using her Polaroid camera (those old school models had some weight to them I can tell you!)

The girls manage to escape and run out of the trees and across a road where they narrowly avoid being run over by drug dealer Sam. The beast is not so lucky and is splattered all over the road giving the girls time to leg it back to their house while leaving a confused Sam wondering what just happened and what on earth he ran over.

Back at the house, Brigitte is astonished to find that Ginger’s wounds are already healing and by the following morning there are just a few marks on her shoulder where the beast’s claws caught her. During the course of the day though, Ginger starts to feel run down and ill. She puts this down to the fact she’s on her period and at the suggestion of Jason, who has 3 sisters so is a self-proclaimed expert on period pain, suggests that Ginger join him for a joint as it will take the edge off.

In a completely out of character move Ginger agrees and stows away in the back of drug dealer Sam’s van where she proceeds to get high although it doesn’t seem to take the weird feelings away. Brigitte is hanging sullenly around outside the van waiting for her sister when Sam appears and she asks him what he thinks he hit. He jokingly says that it was a lycanthrope and is surprised to learn that Brigitte knows what this is (posh name for a werewolf if you didn’t know).

As the full moon approaches, Ginger starts to act more and more oddly. She has weird hairs growing everywhere, her hair is turning white and she starts to snap at Brigitte, driving a wedge into their close sisterly relationship.

Brigitte is convinced that Ginger is turning into a werewolf so enlists the help of the only person she can trust other than her sister – Sam – to find a cure and save Ginger before it’s too late. But as time moves on an increasingly unhinged Ginger starts to endanger everyone around her with deadly (but kind of comical in a twisted way) results.

Can Brigitte save Ginger? Will their sisterly bond survive this ultimate test? Is Ginger really a werewolf or is Brigette’s weirdness clouding her judgement (spoiler alert, the film is about werewolves so….)? You’ll have to watch to find out!

While the film is a bit slow to get going, the pacing allows us to get to know all of the characters and fleshes them out well. Unlike other school-set supernatural films (I’m looking at you The Craft: Legacy) you feel like you know these people even if they are only on screen for a short amount of time.

I have to admit that I find Brigitte a bit too sullen for my liking (and don’t get me started on her hair) and Ginger is too much of a bitch to be likeable but that’s part of the fun of this story – she’s not a nice person but does that mean that she deserves what happens to her? Is it because she’s nasty that she succumbs to the beast that is rising inside of her?

The film certainly does raise more questions than it answers but it has spawned 2 sequels (which I’ve not seen yet) so maybe we will get closure in those. And don’t worry, I’m not saying that this film has one of those annoying cliffhanger type endings that leave you shouting at the screen. There is very much a conclusion I just want to know how the heck Brigitte is going to explain everything to Stepford Mummy.

There are a few minor quibbles I have with the plot in that it seems to pick and choose what aspects of werewolf lore it wants to use in order to serve the plot and doesn’t explain why it’s ignoring some of the more well-known notions about them such as silver bullets. Where did the first werewolf come from and who was it? I also have no idea why the basement of the house is under construction the way it is apart from the fact that it set up to serve the final scene in the film and make it more intense.

Speaking of intense, there is a lot of blood in this movie but interestingly not a lot of gore. You never really see anyone being attacked just the aftermath; it’s all left to your imagination which is a refreshing choice for a film of this genre. Ginger Snaps could have easily gone down the in-your-face route in order shock the audience but instead it relies on some great sound design, editing and voice acting to get the terror across which makes it even worse than viewing the carnage in my opinion.

Overall this is a wonderful movie made on a relatively small budget ($5 million) and if you can get through the slow pacing of the first 20 minutes or so you’ll be in for a wild ride that questions how far you’d be willing to go for the ones you love, especially if they do something unspeakable.

Watch this film if you are a fan of Tupperware (IYKYK)


* Affiliate Links – If you click on the above links I will earn a small commission from any purchase you make. You will not be charged any extra for your purchase but you will be helping fund my website

Let us know your thoughts on "Ginger Snaps"