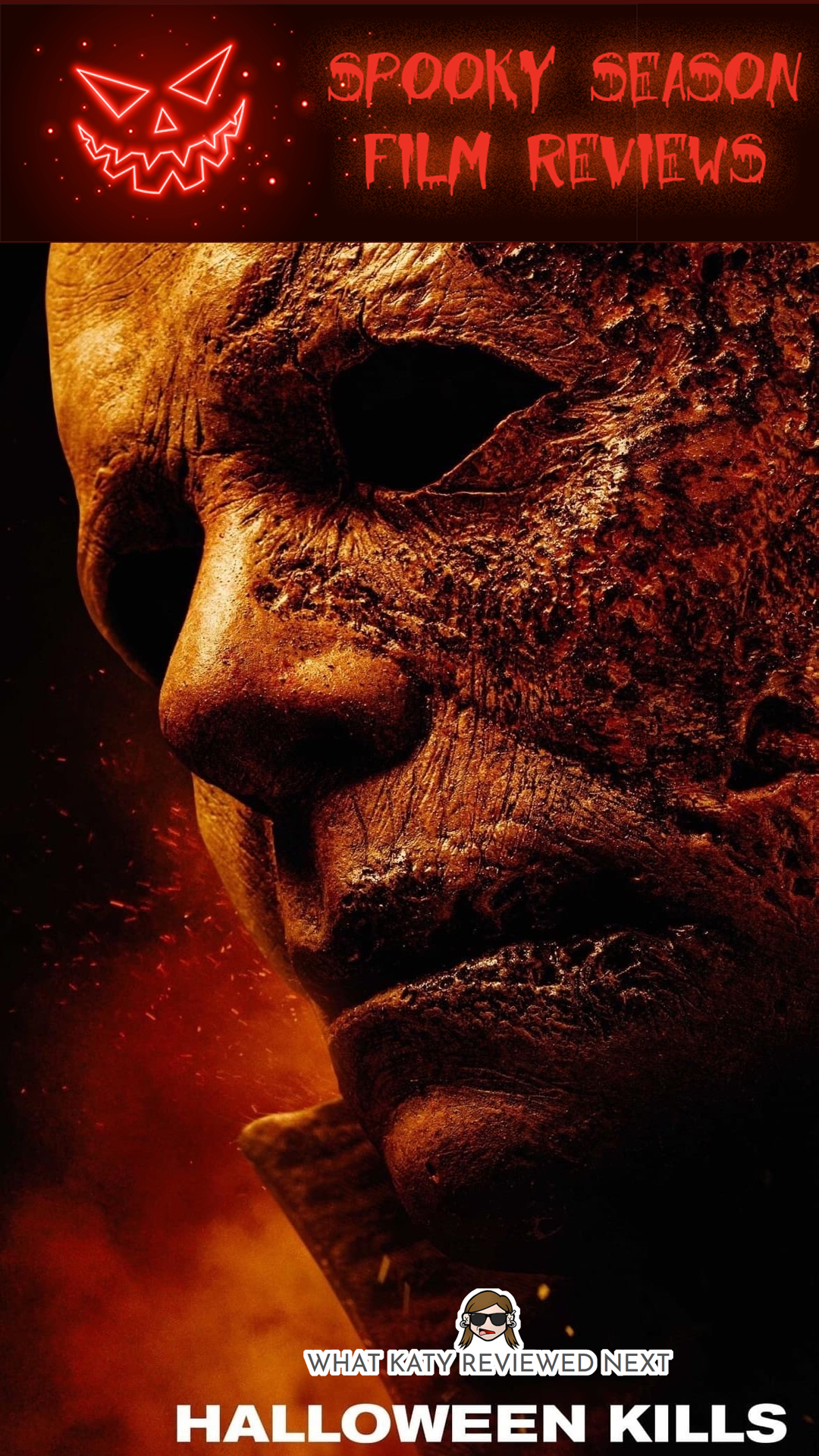 « The Craft: Legacy
Ginger Snaps »
Katy Whitton https://www.facebook.com/WhatKatyReviewedNext/
2021-16-10GMT+010021:54:51288What Katy RevIewed Next
Michael Myers is back to terrorise the inhabitants of Haddonfield. Residents, both old and new, band together to try and stop the rampaging masked maniac before he lays waste to the entire... 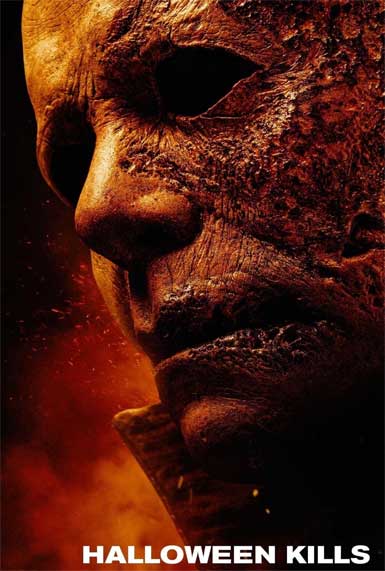 Overview: Michael Myers is back to terrorise the inhabitants of Haddonfield. Residents, both old and new, band together to try and stop the rampaging masked maniac before he lays waste to the entire town

Halloween Kills is the 900th, sorry 11th “sequel” in the famed Halloween series. The franchise was rebooted by Blumhouse back in 2018 (you can read my Halloween (2018) review here) and this film follows on from the events in the 2018 movie.

At the end of Halloween (2018) we see Laurie (Jamie Lee Curtis), her daughter Karen (Judy Greer) and granddaughter Allyson (Andi Matichak) escape Laurie’s burning house. They have managed to lock Michael in the basement so the threat is over, right? Well, what do you think? In previous films he’s been shot, stabbed, run over, chucked out of multiple windows, crushed between a tree and a van and even been decapitated for goodness sake – you think a little fire is going to stop him?

Despite being released 3 years after its predecessor (thanks COVID), the film seamlessly fits in to the timeline set up by the events in the previous film. The film opens with Allyson’s two-timing arse-hat of a boyfriend, Cameron (Dylan Arnold), trying to get hold of his friend Oscar unaware he’s been turned into a shish kebab by Myers. Cameron is desperate to find Allyson as she ran off after seeing Cameron playing tonsil tennis with another girl at the school dance and he’s completely unaware that Allyson’s been battling with an unkillable serial killer and torching her Nan’s house.

Cameron comes across Deputy Hawkins (Will Patton) who was stabbed by a mental mental doctor in the previous film. Miraculously he’s somehow still alive and this leads us into some interesting backstory that takes place in 40 years previously and directly after the end of the events in Halloween (1978) (check out my Halloween review here). It turns out after being shot by Doctor Loomis, falling out of a window and then disappearing, Myers went on another mini-killing spree.

Hawkins and his partner come across Myers in his old family home but Hawkins is super, super inept and manages to not shoot Myers around 500 times and is somehow able to accidentally kill his partner which is then covered up. Hawkins has lived with the knowledge that he could have stopped Myers 40 years ago but was unable to do so and it’s haunted him ever since.

It’s interesting to watch this portion of the film because it could have so easily have been a part of the original 1978 movie. I’m not going to give too much away about this part but there’s a great CGI cameo by Dr. Loomis and it’s an interesting take on what happened after the first film, which also cements the fact that the events in Halloween 2 and later films could not have happened.

In this portion of the film we’re also introduced to a young Lonnie Elam, they take a bit of a liberty with this character’s backstory in that in this version of history he’s a kid who is bullied by some girls when in the 1978 film he was actually one of the kids who bullied Tommy Doyle but I guess the writers felt that they needed to change things up in order for Lonnie and Tommy to be friends now.

There are loads of throwbacks to the 1978 film and, as with Halloween (2018), I am torn between these being a loving homage to a fantastic piece of cinema, a cheeky nod to fans of the original film or just lazy film making. Some shots are a direct copy from the 1978 movie so it could be any of the three options but I’d like to think it’s a combination of 1 and 2 rather than laziness on director David Gordon Green’s part.

As for plot, there really isn’t much of one in this film, it’s odd in a way that this film just seems to exist to prove that Michael Myers can escape from any deadly situation and continue his murderous rampage without breaking a sweat. We don’t really see any further development that moves the characters on in any meaningful way: Laurie is still Laurie (although very much side-lined in this film thanks to the injuries she sustained battling Myers in Halloween (2018)), Karen is still very much Karening despite what’s going on around her and Allyson is still an annoying wayward teen who seemingly takes her cheating dickhead of a boyfriend back without a second thought.

One thing that you will notice in this movie is the amount of blood and gore that’s present. In previous Halloween films, that kind of thing was very much left to the imagination (if you exclude Katee Sackhoff’s head rolling down the stairs in Halloween Resurrection (2002)). Interestingly I’ve just watched the wonderful documentary series The Movies That Made Us on Netflix and the episode on Halloween stated that they didn’t want a lot of blood and gore as a choice as they wanted the audience to imagine what Michael was doing to his victims which would be far more impactful, and you know what? They were right.

There’s one scene in this film that was ludicrously bad, so bad in fact that I had to pause the movie and go and have a little calm down because I wanted to throw a Doc Marten at the TV screen. It’s bad enough that the sequence features such overly stereotypically gay characters (silk robe and cute nicknames? Give me a break but thanks for the inclusive representation I guess?) but when we get to the major death scene I almost died from second-hand embarrassment. This scene features some of the worst practical special effects I have ever seen. Seriously. I thought things had moved on since the late Seventies effects wise but apparently not!

Yeah, Yeah, I know I may be being overly critical and the film was made during a pandemic etc. etc. but with a budget of $20 million they could have done a bit better than something that looks like a styling head doll that has been swapped in for the actor’s real bonce.

And this brings me on to my main issue with this film: There are so many over-the-top death scenes that they lose all relevance and meaning, there’s no shock value due to the sheer amount of carnage. Those “Kill Count” channels on YouTube are going to have a field day with this film, it’s beyond ridiculous.

Alongside the gratuitous slayings there’s a bit of a sub-plot about vigilantism, mob-mentality and how broken the system of law enforcement is in America and to me this is the true horror of the film – not the murderous Michael Myers but the everyday citizen who gets caught up in a frenzy and goes along with the majority without thinking about the consequences of their actions. Some of the scenes in the hospital where Tommy is rallying the waiting room to the cry of “Evil dies tonight” are truly disturbing, and the way that the police are ignored and (quite literally) beaten down is a concerning view on how today’s society rallies around a slogan rather than the actual embodiment of law and order.

You don’t have to have watched the 1978 and 2018 films to understand what is happening in Halloween Kills but I would highly recommend you do before sitting down to watch this as it will give you more appreciation of the story.

While I quite enjoyed it, I feel Halloween Kills is missing the characters that were at the heart of the first two prequels. Maybe it’s because Laurie’s character seems to be just an afterthought in this movie rather than being front-and-centre, she is the Halloween queen after all. That being said, the limited time she has on screen is well used by Jamie Lee Curtis and she has a wonderful monologue towards the end of the film explaining why Michael can’t be killed and why he always finds a way back.

This film certainly isn’t the best of the three If you’re taking 1978, 2018 and this one to be the canonical series but it does set up what is sure to be an explosive finale in Halloween Ends (due to be released in October 2022).

Watch this film if you hate pumpkins and want to see one get blown up with a shotgun.

Watch/Buy The Halloween Series On Amazon *

* Affiliate Links – If you click on the above links I will earn a small commission from any purchase you make. You will not be charged any extra for your purchase but you will be helping fund my website

Let The Right One In
Tagged With:  Halloween | Horror | Slasher | Spooky Season | Thriller

Let us know your thoughts on "Halloween Kills"