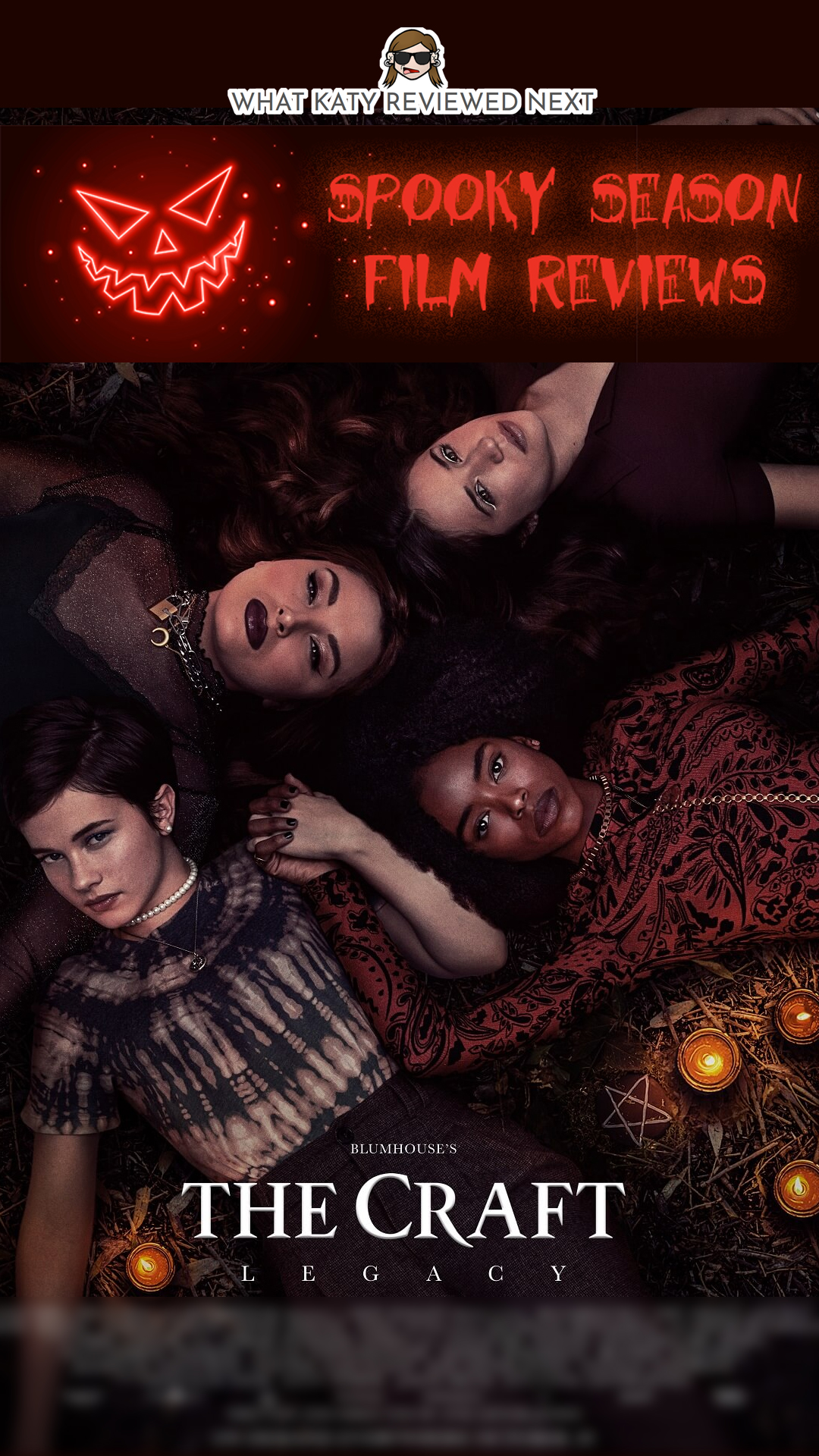 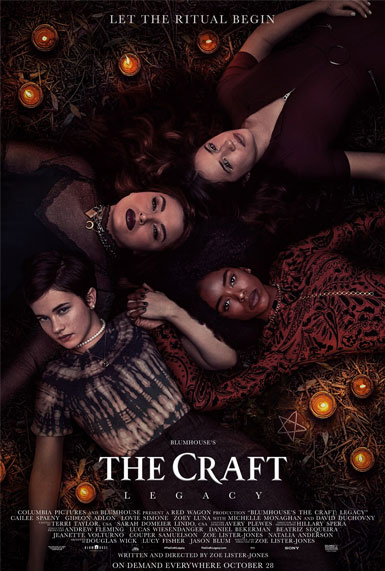 Overview: Four girls discover they are able to harness the power of magic but with great power comes great "responsibility"

When they first announced a new Craft movie, I have a to admit that I felt a sense of dread. The 1996 film has a special place in my heart and the thought of them remaking it was just unimaginable. All was apparently going to be okay though as it was later reported that the film was going to be a sequel, not a carbon copy of the original. Phew!

Oh how they lied to us!

I’m not sure why Hollywood just keeps on taking what were classic (for their time) films and then “soft rebooting” them for a new audience. Just remaster and re-release the originals for goodness sake. Do we need soft reboots of Scream and Home Alone? No, no we don’t – just take a look at the travesty that was Pet Sematary or the wholly unnecessary A Star Is Born for reasons why.

The Craft: Legacy claims that it is a sequel thanks to a 30 second event that takes place right at the end of the film but essentially it’s a complete remake of the 1996 original minus the drama, teenage angst and any real sense of connection with the characters.

But, before we continue if you haven’t read my review of the 1996 film The Craft, please go and check it out now so you’ll be able to see the similarities (and differences) between the films and get the background on why this version winds me up so much.

The film sees Lily (Cailee Spaeny) move to a new school where she struggles to fit in and is generally a bit of a loner. After un unfortunate and rather public period incident, Lily is befriended by Lourdes (Zoey Luna), Frankie (Gideon Adlon) and Tabby (Lovie Simone) who are on the fringes of the school social circles themselves.

Lourdes, Frankie and Tabby have a little bit of a secret hobby: they like to cast spells. The problem is, they’re not too good at it, I mean it’s a bit difficult to call the four corners when there are only three of you isn’t it? Now that Lily has joined their coven (they call it a coven but is it one with only 4 members? I thought they needed 13) their powers increase and they start to do all sorts of magicy things like directly rip-off the “light as a feather stiff as a board” scene from the 1996 movie and turn their fingers into lighters (see my CGI rant later).

Their major spell though sees them turn misogynistic bully Timmy (Nicholas Galitzine) into some sort of feminist-woke-wet-wipe who joins the girls for sleepovers and fun party games – someone fetch my sick bucket, please.

This is where the film starts to go off the rails for me. In the “original” the girls cast a love spell on Chris (Skeet Ulrich) so that he will fall in love with Sarah (Robin Tunney), the spell works but comes with a tragic price. The spell cast on Timmy just makes him look like a bit of a wet blanket, there’s no conflict generated by it, it doesn’t really drive the plot forward, it’s just a way to show what the girls can do, and I am sure there are lots of better ways to do that.

I’m guessing that writer and director Zoe Lister-Jones wanted to use the girl-power loving Timmy as a mirror image of Lily’s new stepfather Adam (David Duchovny) who is a motivational speaker that focuses on men maintaining their manliness by “eliminating the weak” and doing finger snaps.

The problem is, we don’t know enough about Adam’s “manliness-first” mindset to care about it too much. None of the characters are well developed at all, they’re all one-dimensional stereotypes that have no story and no meat to them.

There are a couple of interesting subplot points that are completely glossed over which made me question why they were included in the script in the first place. At one point during a sleepover, Timmy comes out as bisexual and confesses he hooked up with one of Adam’s sons, this could have been a great way of explaining why Timmy acted the way he did, using the butch bravado act to cover up the insecurities he feels over his sexuality but nope, he drops the bombshell and then it’s never really mentioned again. Lourdes also casually drops references to being trans saying that she can’t relate to Lily’s period incident as she’s never had one herself. Again, this is dropped like a hot potato. It’s almost as though the studio were like “No, no, take out all that gay stuff” during the editing process.

In the 1996 version of The Craft we were given backstories to all the characters: Sarah’s mother had died, Nancy came from a poor and abusive home, Bonnie was horrifically scarred and Rochelle had to face racism on a daily basis. With the 2020 version we know nothing, and I mean NOTHING about any of the characters so we have no vested interest in them at all.

And this is the heart of the problem with this film. While The Craft (1996) had the struggle between the girls as the centre of the story and because we knew these girls the tension and the danger felt real. In The Craft: Legacy this conflict is moved outside of the friendship group but because we don’t really know anything about them, we don’t care if they win or lose in their fight.

It feels like so much was cut of out this film that there’s almost an entire other moving just sitting on the editing room floor. At only an hour and 37 minutes long, writer/director Lister-Jones certainly had plenty of extra time to develop the character’s backstory, something the original managed with only 4 minutes of extra run time.

You might have noticed that unlike my other reviews I’ve not given as detailed a breakdown of the storyline and what happens and there’s a reason for that. Nothing happens. Literally nothing until the last 15-to-20 minutes of the film which then feels so rushed it’s almost comical.

I know this film was made during the COVID-19 pandemic so we have to give them some credit I guess but there’s just so much missing and wrong that I can’t give it a pass.

The choppy storyline, uninteresting characters and general lack of a driving force behind the plot really bring this film down for me. And don’t even get me started on the CGI! The film’s budget was $18 million and the special effects look like I’d downloaded a copy of Blender, got drunk on Mojitos and then created magic effects while only being agle to see out of one eye.

It’s such a shame that this film falls so far off the mark when comparing it to the 1996 film. Maybe that’s the problem, perhaps the affection I have for The Craft isn’t allowing me to view The Craft: Legacy the way that the director intended or perhaps it’s that I’m not really in the audience age-range that this film is trying to reach so I don’t get the modern-day allegories that are being made.

That being said, even if I just “don’t get it”, it doesn’t take away from the fact that the characters are one-dimensional and huge opportunities were missed in the telling of some of their stories.

And the ending? HAHAHAHAHAAHAHAHAHA. No.

The film only grossed around $4.5 million (it was released digitally in a pandemic though but….ouch) so I don’t think we’ll be seeing a sequel any time soon which is sad as, with the right script, the actresses could have knocked it out of the park and instead they were stuck with a lame duck.

Watch this film if you would like to laugh at ludicrous CGI and shout “WHY!!!!” at the screen a lot.

Let us know your thoughts on "The Craft: Legacy"