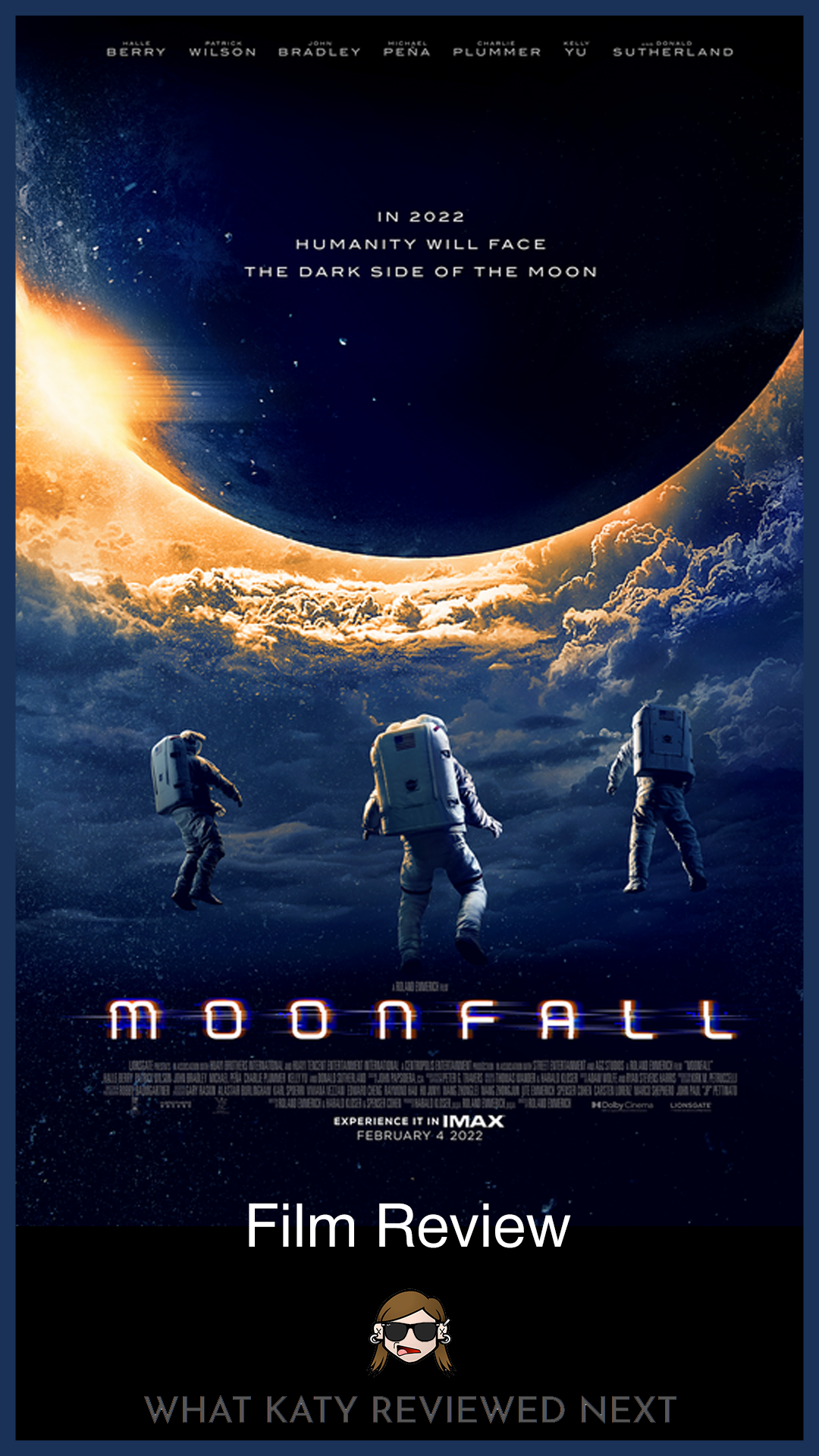 « Doctor Strange In The Multiverse Of Madness
Glass Onion: A Knives Out Mystery »
Katy Whitton https://www.facebook.com/WhatKatyReviewedNext/
2022-17-08GMT+01006:00:21228What Katy RevIewed Next
When the moon unexpectedly moves out of orbit it sets off a series of events that could result in the end of the human race and all life across the... 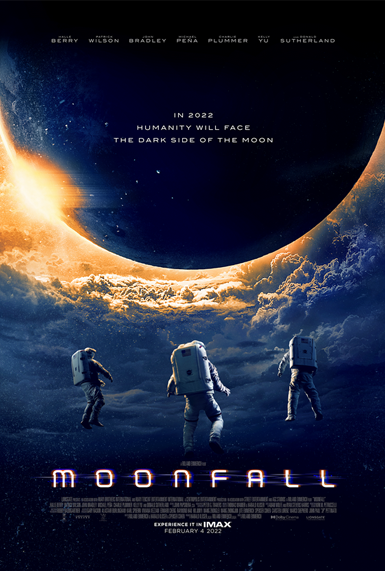 Overview: When the moon unexpectedly moves out of orbit it sets off a series of events that could result in the end of the human race and all life across the universe

The trailer let’s you know that the moon’s falling out of orbit and all sorts of havoc is going break lose – but the moon is not just falling out of orbit, it’s because of something else and there’s a NASA cover up about it. I’ve linked the trailer in the info section above but I’ll put it here as well as you really need to watch it to understand what I am about to review:

The film looks and sounds great in theory, right – especially when this movie is brought to you by none other than Roland Emmerich, director of glorious action/disaster/sci-fi films such as:

I mean, the man has some impressive credentials, especially as he wrote (or got credits for writing) a lot of these films.

So, you’d be thinking that someone with such an illustrious background in the action/disaster movie genre would have a sure-fire hit under their belts right?

Before we get ahead of ourselves, let’s get a better look at the storyline.

Eleven-ish years ago a team of astronauts were trying to fix a satellite when something crashed into the satellite and their shuttle, killing one member of the crew, incapacitating another and leaving the sole conscious survivor to pilot the Shuttle Endeavour back to Earth with no power.

After returning to a heroes’ welcome the pilot, Brian Harper (Patrick Wilson, The Conjouring, Insidious, Aquaman) and navigator Jocinda Fowler (Oscar winner Halle Berry – X-Men, Die Another Day, Catwoman (but we don’t talk about that one – let me know if I should review it)) are then met with a series of governmental hearings about the accident.

No one will believe Harper’s story of seeing something strange crash into the satellite and shuttle, and as Fowler can’t corroborate his story, it’s written off as a rogue meteor strike and left at that.

Harper won’t let it go and is discharged from his position in NASA so becomes a deadbeat (of course), while Fowler rises through the ranks for seemingly toeing the line.

Fast-forward 11 (ish) years and KC Houseman (John Bradley, Game Of Thrones), an apparent “Doctor of something” discovers that the moon is falling out of its usual orbit. The problem his he’s found this out by breaking into labs and stealing time on telescopes to do so and no one will take any of his phone calls as he’s viewed as a crank and NASA even has a restraining order against him.

As NASA won’t take his calls, KC releases the information to the public – we don’t know how but it appears as an alert on all phones at the same time so is he like a hacker too? Plot point unanswered.

NASA has seen what is going on with the moon, and in a joint mission with the European Space Agency (ESA) launches a mission to check out what’s happening with the moon.

I’d like to take the time to point out that they stressed – and I mean STRESSED this was a JOINT mission with the ESA, which they had to do as NASA doesn’t really have any way of getting into orbit (unless they ask their mate Elon) – so why are all of the astronauts onboard talking like an American?

The lady with the French flag on her space suit even has an American accent. Um, what???? SHE HAD 3 LINES – FAKE A FRENCH ACCENT FOR GOODNESS SAKE.

I mean look, here’s the flag…. 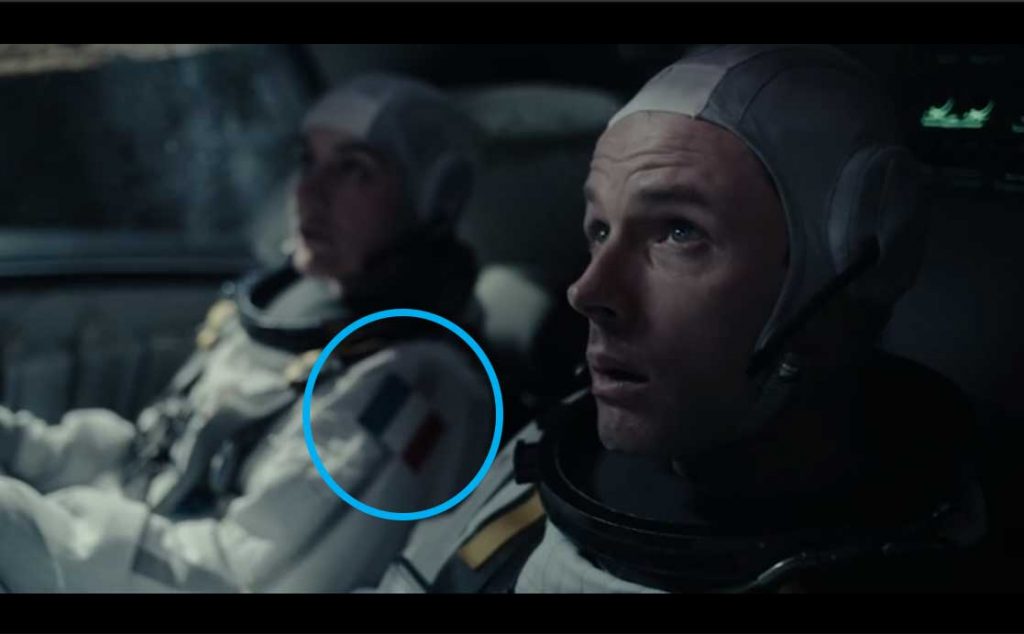 Here she is speaking:

HOW IS THAT FRENCH? But I digress, that’s the least of our worries with this film (but maybe foreshadowing the lack of care and attention that is to come).

(And yes, I took the time to edit that, you are welcome)

To continue, the ESA mission gets attacked and is destroyed but they’re able to provide a bit of data back to Earth that gets them thinking.

The data shows that they were attacked by some sort of sentient entity and that there’s a whacking great tunnel in the moon right where Harper said the thing that attacked them landed eleven years ago so…. yeah. Nice one NASA.

Meanwhile KC (in a discount Nick Frost role in this film) and Harper meet up, travel to NASA to save the world and Harper and Fowler have to battle their issues with each other.

Long story short, NASA has known about this since the first moon mission and shoe horn in Donald Sutherland (The Hunger Games, Invasion Of The Body Snatchers, Don’t Look Now) for a bit of exposition. NASA have been hiding issues with the moon for whatever reason – we don’t know and it’s not really explained, a bit like most of the plot to be honest.

They decide to try and fly up to the moon again to stop it falling by using older tech which they hope will confuse whatever is up there and Harper is the only one who can fly the mission.

Of course he is.

There’s a side plot of both Harper and Fowler’s families trying to get to safety. I will say in this case, at least none of the kids have asthma or diabetes which they usually use to add apparent “dramatic tension” to these side arcs. But we really don’t care about any of these characters to be honest and it could have been removed entirely and saved me 20 minutes of stupidity.

So from what you’ve read so far you might think that I hate this film and that’s not strictly true.

My issue is that it’s not bad, it’s not good and it doesn’t even fall into the “so bad it’s good” category. It’s just mediocre at best, copycat at worst.

I made some notes watching it and here’s just some of the films that Emmerich outright copied or ripped off. Only one of these I’d deem as paying homage to – and yes, I know some of these are his own prior films but the man needs some originality, you can’t do the same thing in every movie (I’m looking at you Edgar Wright and Zack Snyder).

Sorry I got sidetracked, here are the films I spotted (and why I thought they were a rip off):

That’s 14 films. FOURTEEN where I could draw a direct comparison to a plot point or an individual scene (and one homage).

But it gets worse.

They obviously skimped on the script budget, pretty much every line Halle Berry says is lined up to be used in the trailer and the rest of the dialogue is… um well, take these gems (yes, I wrote them down as they were THAT BAD):

Fowler: We need to go back to the moon

Boss: Get in line, you work for ME!
Fowler: I work for the American people and you’re keeping them in the dark

KC: Have you ever heard about a Dyson Sphere
Harper: Yes
KC: [proceeds to explain what a Dyson sphere is]

KC (I think, I’d lost the will to live by this point): Everything we know about nature has just gone out the window

Let’s ignore the script, what about the music?

Didn’t go with what was happening, not relevant to the tone of the film and tried to be Hans Zimmer and came out more like the Cheeky Girls if I’m honest.

Well, the special effects will save it, right?

Any action sequence took place at night (obviously) but even so, they weren’t that good.

The trailer cuts around the more dodgy parts and I thought that’s maybe because they were going to fix it later on in production but they didn’t.

I’ve seen better effects on YouTube fan videos – seriously. I mean, check CG Geek‘s video out (and this is done with a free tool as well)

Okay so most of the budget went on the actors then?

Well if it did I would ask for a refund. Halley Berry and Patrick Wilson do the best with what they’re handed but you can only go so far with such a bad script. They’re pretty much just phoning it in for the most part of the movie.

The stand out for me was Donald Sutherland who was literally on screen for less that 5 minutes and stole the show. It was like his Judi Dench moment where she got the Oscar for Shakespeare In Love but was only on screen for around 8 minutes.

Well for a start the name of the film is wrong because while the moon is technically falling, most of the issue stem from when it’s rising so there’s that.

Also, if you have a basic understanding of physics, this film will annoy the heck out of you. They try to get around with with the “This changes everything we know” shtick but it doesn’t really work.

Check Out Our Recommendations On Amazon

This film had the potential to be such a good cheesy movie: it has the most pre-eminent director of action/disaster films of the modern era, had a great cast and (maybe more importantly), it had the budget.

What let it down was the storyline. While Emmerich’s come up with some extremely good ideas in the past (see Independence Day, 2012, Day After Tomorrow as examples), this seemed lazy at best, almost like he was taking discarded bits of scripts from his previous films and trying to meld them into a new one.

And it just didn’t work.

Also, it’s a bit too long. As I said earlier, the side drama with the families could have been dropped altogether which would have probably made the film a bit more fast-paced and enjoyable.

I will leave you with some quotes from my notes that I took:

“OMG – Trash!!!! Oscar Halle doing her best but dialogue is awful”
“What else did these idiots write?” (as in scripts – turns out all the other Emmerich films so whoops for me)
“Cat called Fuzz Aldrin – best bit so far”
“WTF was the budget of this. That looks sh!t (referring to flooding sequence)”
“Best part was the ending song”

And the end credit song was the best part. It was performed by Luka Kloser, her dad Harald did the soundtrack of the film that I enjoyed so much ahem.

I’ll leave you with it – enjoy

No Time To Die

Fantastic Beasts: The Crimes of Grindelwald

Let us know your thoughts on "Moonfall"