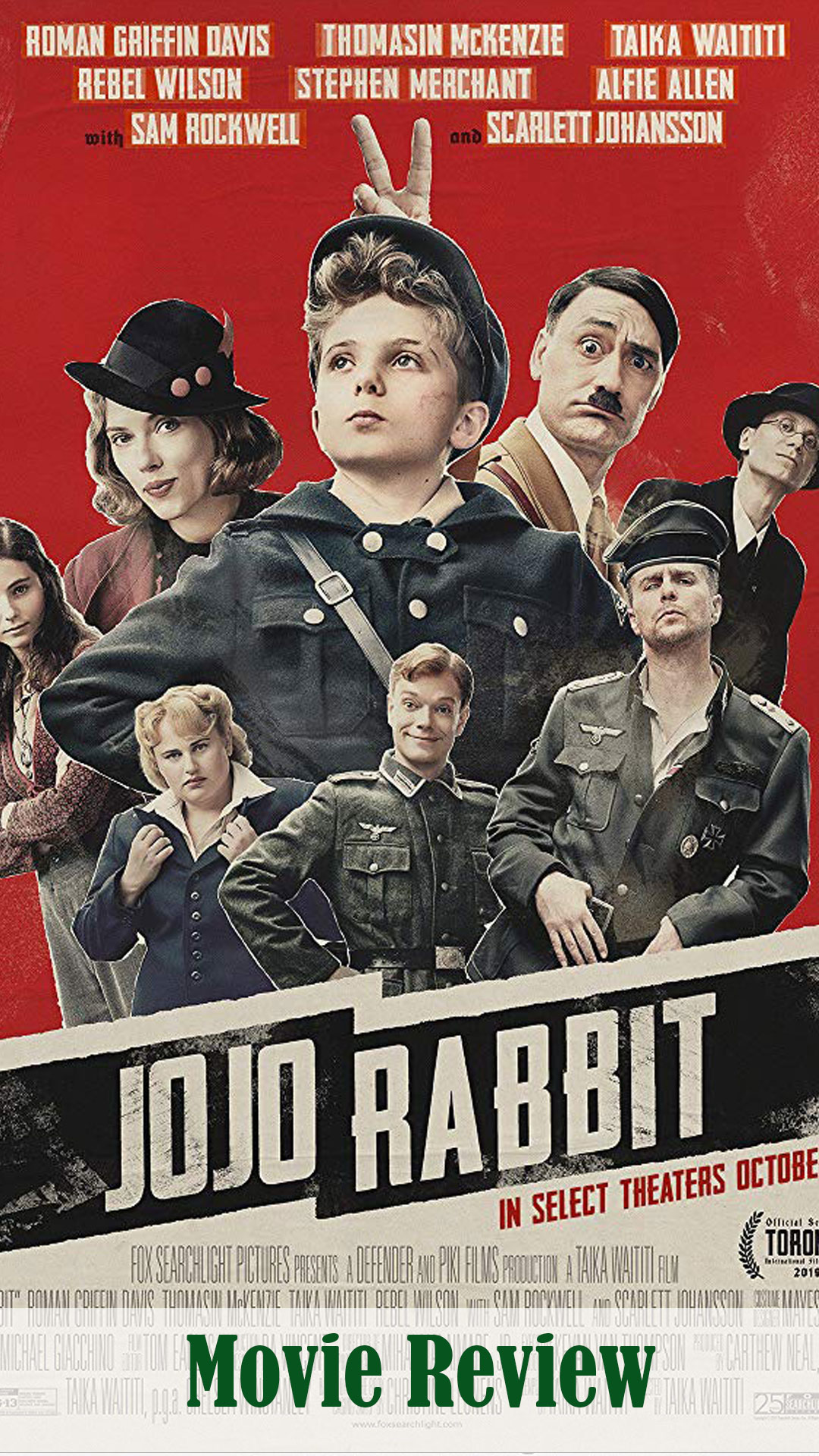 « Silent Night, Zombie Night
Cooked: Survival by Zip Code »
Katy Whitton https://www.facebook.com/WhatKatyReviewedNext/
2019-17-12GMT+01003:40:36350What Katy RevIewed Next
Jojo is a 10 year old serving in the Hitler Youth. The difference between Jojo and the other members is that he has a powerfully ally - the Führer himself is Jojo's (albeit imaginary) best... 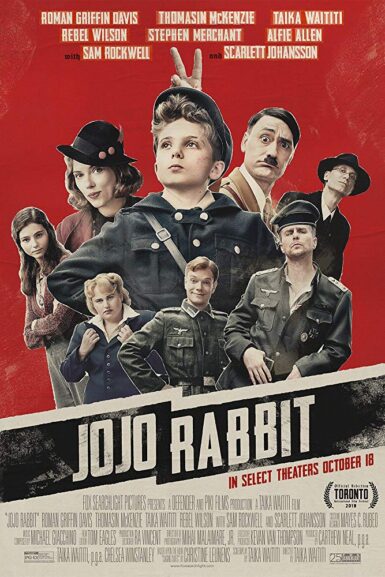 Overview: Jojo is a 10 year old serving in the Hitler Youth. The difference between Jojo and the other members is that he has a powerfully ally - the Führer himself is Jojo's (albeit imaginary) best friend.

Note: I went to see a Cineworld Unlimited Screening of JoJo Rabbit ahead of its official UK release on the 1st of January 2020 so we’re taking a quick break from our 24 Movies of Christmas.

Well, this is an emotional rollercoaster of a film! You’ll laugh, you’ll cry and you’ll shake your head at the attitudes of people that you wouldn’t think possible even though history seems to be repeating itself with the rise of anti-semitism and the far right in this so-called enlightened era.

Jojo Rabbit follows a 10 year old boy called Johannes Betzler (Roman Griffin Davis in his first screen role), known as Jojo to his friends. Jojo is a member of the Hitler youth, fervent Nazi supporter and is a super-fan of Adolph Hitler – so much so that the Führer (played by director Taika Waititi) is Jojo’s imaginary best friend.

Based on the book “Caging Skies” by Christine Leunens, we follow Jojo as he sets off to a Hitler Youth camp where boys will learn how to throw grenades, shoot guns and survive a gas attack amongst other things. The girls on the other hand? They’ll learn to dress wounds, cook and get pregnant. Nice!

It takes Jojo a while to get into the spirit of things, while he loves the special knife he’s been given he’s not too sure about the book burning party he has to attend which is wonderfully introduced by Fraulein Rahm (Rebel Wilson) who proudly announces “We’re [the Arians] 1000 percent more superior than any other race. Let’s go burn some books!”

During a training session some of the older Hitler youth members ask the boys if they are prepared to kill. They of course all say “yes” as that’s what they strive towards – a place in Hitler’s army and perhaps a coveted position in his personal guard. They single out Jojo and ask him to kill a rabbit which he can’t go through therefore earning him the nickname “Jojo Rabbit” because of his cowardice.

Jojo runs off and has a heart-to-heart with Hitler who tells Jojo that the rabbit is a fierce creature as it has to deal with finding carrots for its family and ward off predators. Jojo proudly takes the moniker of “rabbit” and runs through the woods back to the training group screaming his new name. He steals a hand grenade from Captain Klenzendorf (Sam Rockwell) who is drunkenly teaching the children how to use them, and runs towards his bullies. Launching the grenade at them he stands tall glaring at them defiantly, until the grenade hits a tree and bounces back landing at his feet. Fortunately the blast doesn’t kill Jojo but he’s left with scars on his face and a limp which rules him out of active service in the Hitler youth and shatters his dream of being Hitler’s personal bodyguard.

Feeling guilty over his lack of supervision and the fact that Jojo’s mother Rosie (Scarlett Johansson) holds him responsible for her son’s injuries Klenzendorf puts Jojo to work at the local Nazi party headquarters putting up flyers, delivering conscription papers and other menial tasks. One day Jojo returns home early and hears noises coming from his dead sister’s bedroom so he goes to investigate and finds a young woman living in the walls of the house.

It transpires that Jojo’s mother has been protecting her daughter’s friend, a Jewish girl named Elsa (Thomasin McKenzie). Jojo’s Nazi instincts kick in and he tells Elsa that he will let the Gestapo know that she is in hiding in his house. She counters that if he does this both he and his Mother will be taken and executed for helping a Jew and that if he tells his Mother he knows about her she’ll slice his head off with a knife – she has several at this point as each time Jojo goes to confront her she bests him and ends up with the knife he’s carrying.

There’s some wonderful interaction at this point between Jojo and Hitler. Jojo’s after advice and states that he should probably just negotiate with Elsa while Hitler is espousing the virtues of burning the house down with her in it and blaming it on Winston Churchill. Hitler eventually agrees that negotiation is probably the better option but warns Jojo not to take any more knives with him when he speaks to her. Later that evening Rosie is trying to make dinner but can’t find a knife in the kitchen – it’s a simple but effective touch that shows that humour can be found in a film that covers such sensitive subjects.

As time goes on, a wary alliance between Jojo and Elsa forms. Jojo decides that he’s going to write a book about Jews so that people know what to look for and he decides to call it “Yoohoo, Jew” which is his usual greeting when calling for Elsa.

Things take a sinister turn when the Gestapo turn up at Jojo’s house and begin to turn it upside down. Elsa has to pretend that she’s Jojo’s sister and finds a surprise ally in the Nazi camp who helps cover her secret identity.

I can’t go into too much detail about the rest of the plot as I don’t want to give any spoilers away, just be warned that you will need a box of tissues for several scenes after this point and that while there are some laughs in the final act, they are few and far between.

In some of the final scenes of the film we’re shown the final stand of the desperate German citizens who attempt to ward off the advancing Russian and American troops. It’s at this point that Jojo is reunited with his best friend Yorki (Archie Yates, also in his first screen performance) who has been handed a weapon and told to basically get on with it. This isn’t just a plot point, it’s a sadly true fact that the boys in the Hitler Youth, pensioners and women were expected to take up arms and fight to the last. Finally Jojo sees the true horrors of the Nazi war machine and the damage to society it has done.

You might think that this is an odd film to make, and to a certain extent that’s a valid point however, as I mentioned previously, with the resurgence of the Neo-Nazi movement in Europe, the prominence of the Alt-Right in the USA and other countries, and widespread Anti-Semitism (even in mainstream political parties here in the UK) it is a very timely piece of cinema and serves to shine a light on the principles of Nazism and Hitler in general. And, before anyone gets on their high horse about the language used towards Elsa in the film Taika Waititi is Jewish himself and handles the subject matter with the humourous care it deserves.

This film is almost perfect. It’s slightly let down by the uneven performances of its two youngest lead character (Jojo and Yorki), but that’s to be expected in their first film roles. I also found the fact that the character’s German accents kept dropping every now and again a minor irritation. The film’s also not quite as funny as the trailer leads you to believe – they do show most of the “laugh out loud” bits in the trailer and because of these small things I’ve knocked a couple of stars off – petty I know but, hey! It’s my review and it’s not a perfect film in my eyes.

I also found the music slightly at odds with the film as well. The film starts (presumably) in mid-to-late 1944 and finishes with the Battle of Berlin (or equivalent of) in May 1945. The opening “theme” song is a German version of “I want to hold your hand” by the Beatles which was released in February 1964. While I get the analogy between the adoration of Hitler and the Beatles the 20 year age gap is just weird. The closing “theme” is “Heroes” by David Bowie which was released in 1977 and I get our characters were “Heroes” of a sort but it’s a tenuous link. Okay, the songs were in German but knowing that they are modern they just seem so at odds with the period the film is set that it just really confused me. It didn’t really add anything to the film – they could have used an orchestral score or period piece of music so I’m unsure as to the reasoning behind this artistic choice.

All that being said, Jojo Rabbit is a wonderful film and its minor flaws (or the things that annoyed me about it at least) shouldn’t be enough to put you off and I’d highly recommend that you go and see it as soon as it’s released. I hope that Roman Griffin Davis doesn’t fall into the “one hit wonder” child movie trap as I do think with a little more experience he’s going to be a wonderfully solid and expressive actor and certainly someone to keep and eye on in the future.

Watch this film if you want to feel hopeful that we can turn away from hate, see the error of our ways and find humour in even the most darkest days of our history.