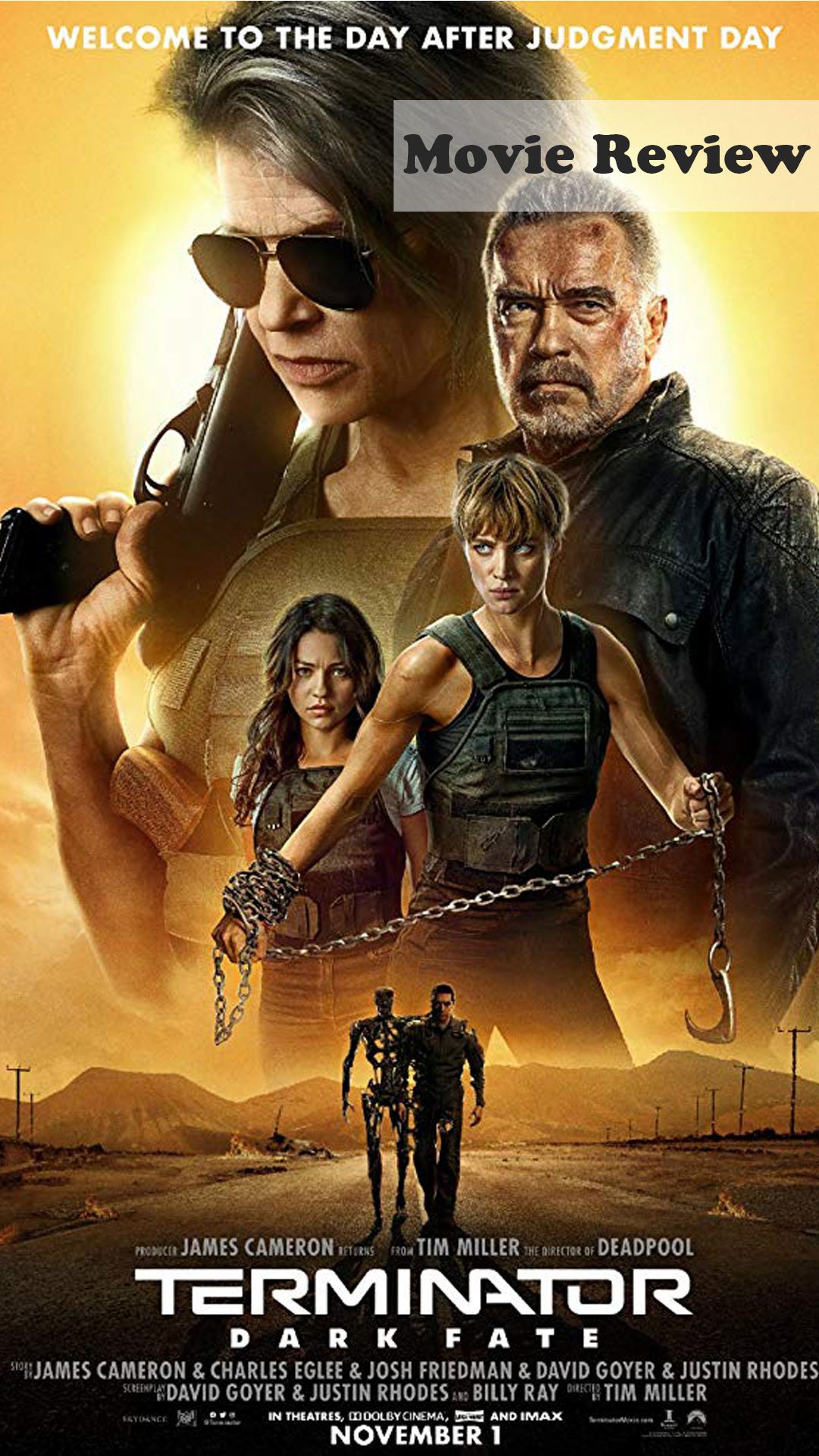 « The Funhouse
Knives Out »
Katy Whitton https://www.facebook.com/WhatKatyReviewedNext/
2019-19-11GMT+010013:45:16322What Katy RevIewed Next
After stopping Judgement Day, Sarah Connor is taking a well earned break. Unfortunately it doesn't last long and she's drawn back into the fight to save humanity's new saviour, a young Mexican woman... 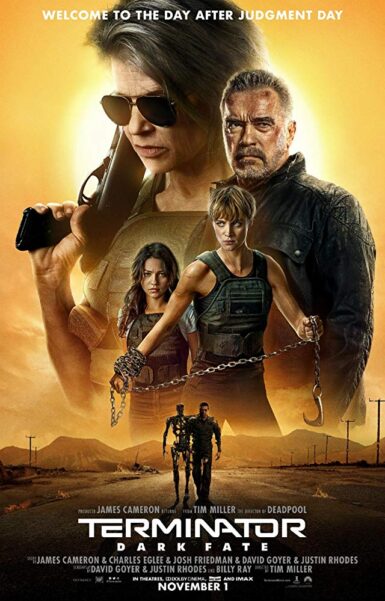 Overview: After stopping Judgement Day, Sarah Connor is taking a well earned break. Unfortunately it doesn't last long and she's drawn back into the fight to save humanity's new saviour, a young Mexican woman called Dani. Aided by a new friend and an old enemy they must work together to destroy the seemingly unstoppable REV-9 Terminator.

Terminator: Dark Fate is, depending on how you look at it, the sixth or third film in the Terminator Franchise. Confused? Me too!

This scene is really well done in terms of the de-aging effects on Connor and the Terminator (Arnold Schwarzenegger), I do however have a major problem with the way that this scene is portrayed though. Sarah Connor has kicked the ass of two Terminators and prevented the destruction of mankind so it’s only fair that she gets to enjoy a cocktail in the sun but if you’re telling me should would just down all weapons after the events of T2 and not even try to stop the Terminator that kills her son then we’re talking very much about two different women. I know that this event is her major plot driver for the movie but it just makes no sense in the Terminator Universe. Anyway, enough of my bugbears, let’s get on with the rest of the review.

The film follows Dani Ramos, an ordinary Mexican girl who works in an auto-factory. In what is something of an ironic twist, her brother’s job is replaced by a robot and she goes to argue his case which serves to set her character up as a take-charge and stand-up-for-the-little-guy role. Her day is about to go rather downhill as a Terminator enters the factory disguised as her father and tries to take Dani out. The Terminator’s efforts are thwarted by the appearance of Grace, a cyborg enhanced human who’s been sent back from the future to protect Dani as – yup, you guessed it, she’s the saviour of the human race.

The new Terminator – called REV-9 – isn’t that much different from the eerie T-1000 in T2 (played in a wonderfully creepy way by Robert Patrick), he can morph into people if he touches them (they don’t survive this process apparently, although we don’t see it), great weapons out of his hands and absorb a heck of a lot of gunfire. You may think that he’s just the same as the T-1000 however the REV-9 is able to split from it’s metal skeleton and become two separate functioning terminators which makes for some interesting fight scenes.

Connor finds Dani and Grace thanks to a mysterious text message and joins with them in order to get Dani to safety. Connor is damaged by the loss of her son and in a way threatened by Dani’s existence – her kid was murdered seemingly for nothing and both she and John are easily replaced at the saviour of the world. While she does help them, it’s grudgingly and only because she essentially has nothing better to do.

The trio go hunting for the sender of the message – who happens to live at the same co-ordinates Grace has tattooed on her side, what a coincidence! – and discover that it’s the T-800 who killed John that’s been helping Sarah for 20 years find and destroy any Terminators that arrive from the future.

While the film is good, there’s nothing new or outstanding about the storyline – in fact it lifts a lot of its source material almost directly from both Terminator and Terminator 2 – young person who will save humanity? Check. Liquid Robot? Check. T-800 there to help out? Check. Car chase? Check. Character having a crisis about their future? Check. Global destruction thanks to a rogue computer system? Check. I could go on but I’m sure you get the picture.

I had high hopes for this film, not least because it marked James Cameron’s return to the franchise (he last worked on Terminator 2 and then called it a day) and he came up with the story. Still, I guess the old adage of “write what you know” holds true for this film. I was also hoping that Tim Miller would instill some of his Deadpool-style humour but it was sorely lacking. There were a few throw-away lines that were intended to be funny but whether it was the delivery, acting or pacing they just seem to fall flat. One high point is that the T-800 is now a married haberdasher named Carl instead of a evil killing machine and there are some comedy moments surrounding this like how he can have sex with his wife when he ways 400lbs, and why you shouldn’t put solid curtains in kids room. If that’s the sort of humour then you know the bar is set really low.

There are a couple of great action sequences however, as per usual, the main one is set at night so you can’t see what’s going on. Our rag-tag crew are on a C5 plane when the REV-9 decides to show up and there’s a mid-air plane crash and some clever Zero-G fighting but it’s difficult to see who is who thanks to the lack of lighting and the editing is a bit choppy and disjointed as well so it’s difficult to tell where people are and what they’re doing.

Overall the film was good, but just not that great. While it was awesome to have the main characters be women – strong women at that, and one of those women represent a minority, the film was lacking the warmth and urgency of Terminator 2. In T2, you were concerned that if John Connor died, all hope was lost. In Dark Fate, I really didn’t care that much about Dani – I mean if John is so easily replaceable I guess she is too and I think that’s where the film lost its audience.

Poor box office (it’s only done $235 million on a budget of $185 million) probably means that we won’t get to see the other 2 sequels that were planned which is a shame as by the end of the film Sarah Connor had stopped feeling sorry for herself and was back in arse-kicking mode and I would have liked to see that continue.

Watch this film if you’re feeling nostalgic for the original films but don’t want to have to concentrate on the storyline too much.