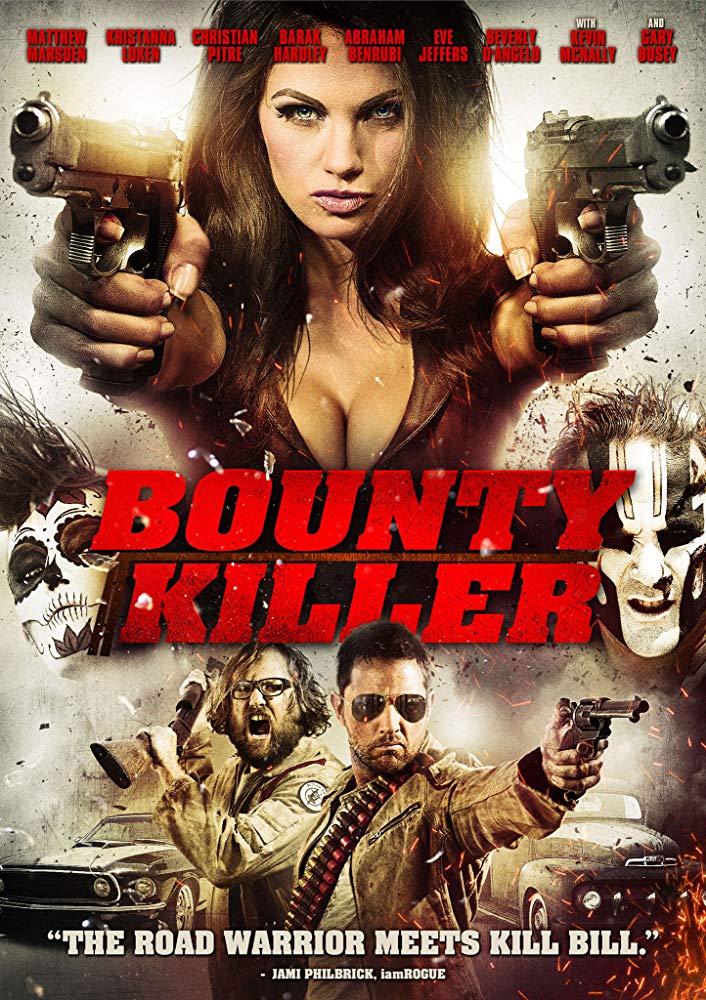 « A Simple Favor
2012: Doomsday »
Katy Whitton https://www.facebook.com/WhatKatyReviewedNext/
2018-23-09GMT+01003:24:30265What Katy RevIewed Next
Bounty Killer is set in 2042 where corporate greed has caused the apocalypse. The Bounty Killers are tasked with bring all of the corporate suits to... 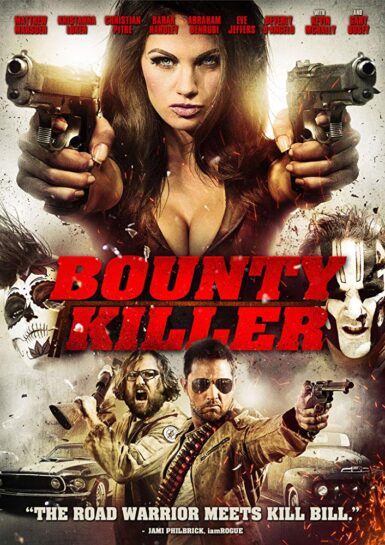 Set in the near future, Bounty Killer is a film about… er…. Bounty Hunters that go out to fulfill contracts taken out on the greedy businessmen and women that caused the apocalypse.

Stylistically and thematically this film invokes thoughts of Mad Max (the first “proper” one, not the rubbish sequels or Tom Hardy weird-fest), Death Proof and Death Race 2000.

The orange-hued desert tones and its use of vehicles try hard to replicate the iconic Mad Max film but falls short of the mark. I think the problem is that everything is a bit too pristine – all the vehicles look like they’ve just been driven off the garage forecourt (even thought they’re from the 1970s) whereas Mad Max had a warn and lived in look: vehicles patched and cobbled together as only a future apocalypse could cause.

Reading the film’s description (view a great version here) you’d would think that this film was an ironic take on corporate greed, a way to hold the mirror up to our current society’s love of capitalism and where the people with the money call all the shots. Instead it’s all over the place with the Bounty Hunters being just as bad as the Apocalypse-causing business people leaving you unsure who you should be rooting for.

I’m not sure what I was hoping from this film – the Mad Max style cinematography and the hints of Death Proof sounded promising but the film is really let down by not knowing what it wants to be or where it sits.

Part road-movie, Grindhouse exploitation and Romance the film doesn’t fit easily in any category and it’s not helped by some bad editing and acting either. There are some supposedly comedy moments with throw-away casual one-liners that fall flat – I don’t know, perhaps I was just in a bad mood but I didn’t see the humour anywhere.

I feel that a bigger budget would have helped (the film was shot in just 18 days), there’s a touch a cheapness to the film that isn’t a kitsch feel that seems to work in Death Proof or Death Race 2000 so I don’t know how Bounty Hunter wasn’t able to capitalise on this.

One standout part of the film is the “Gypsy’s” face paint – meant to scare and invoke terror it’s really well done and is probably the best aspect of the production design – in fact apart from Gary Busey’s fee I think this is where most of the budget went – face paint isn’t cheap you know!

The cast is okay but there aren’t really any stand out performances. Christian Pitre is adequate an the vengeful “Mary Death” and Gary Busey has obviously just shown up for his paycheck (and, judging by his performance, a free mini bar). I think part of the problem is that while there is some back-story development you don’t really feel for any of the characters – you’re just moving from scene to scene to see who gets bumped off in a gory fashion next.

Final thoughts? It’s only an hour and a half but I wouldn’t waste your time. If you’re in the mood for a futuristic or gore filled road movie watch Mad Max or Death Proof or if you want a bit of nostalgia watch Death Race 2000 (the 1975 version rather than the Jason Statham 2008 version).

I really wanted to enjoy this film but it fell far short on all fronts – save your time and don’t bother – it won’t rev your engine at all.

Ant-Man And The Wasp
Tagged With:  Action | Gore | Grindhouse | Sci-Fi

Let us know your thoughts on "Bounty Killer"