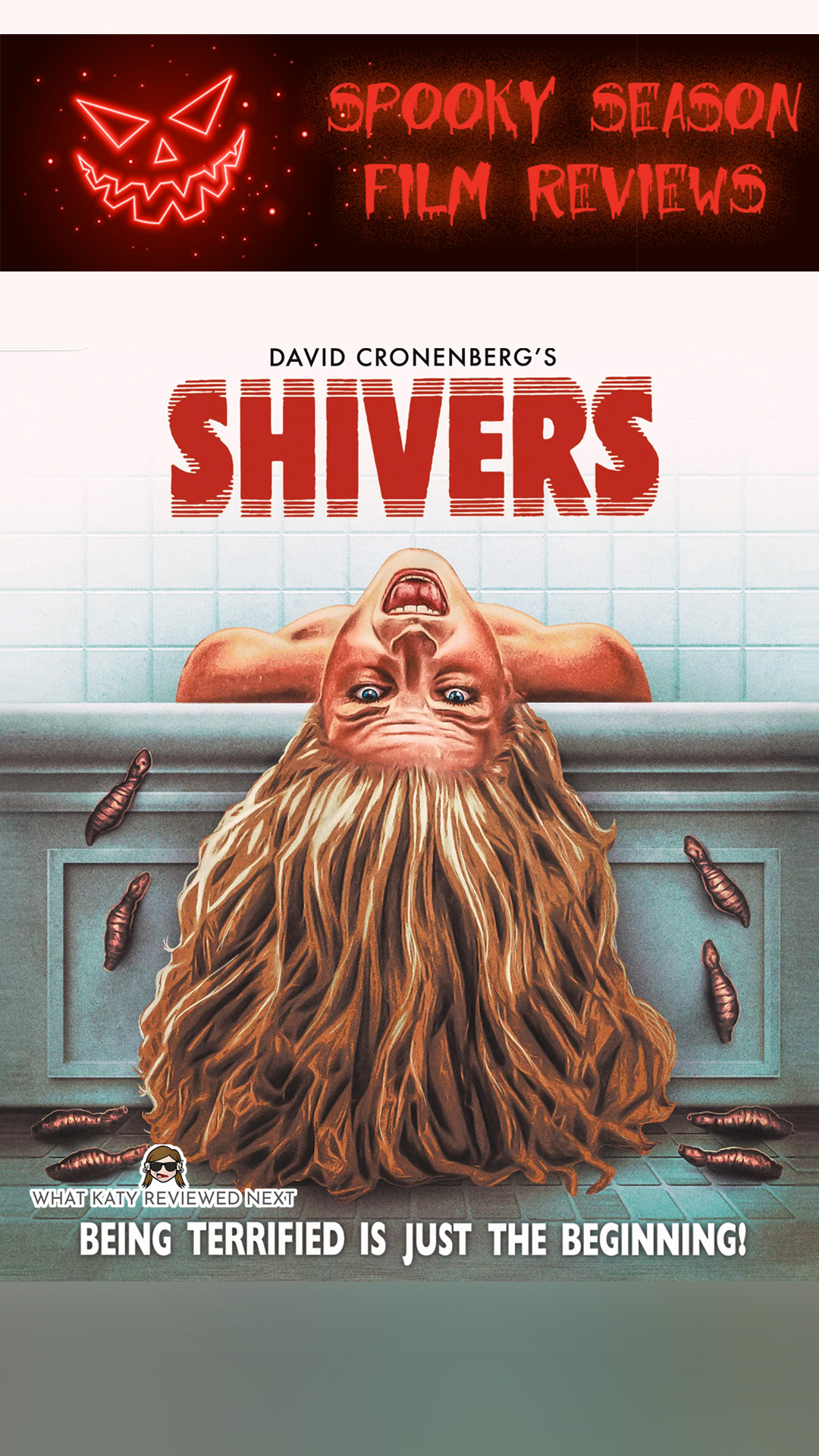 « Event Horizon
The Craft: Legacy »
Katy Whitton https://www.facebook.com/WhatKatyReviewedNext/
2021-13-10GMT+01001:07:17285What Katy RevIewed Next
A seemingly idyllic apartment complex holds a dark secret, it's inhabitants are infected by a parasite and soon succumb to their basest emotions. Who will survive and will it... 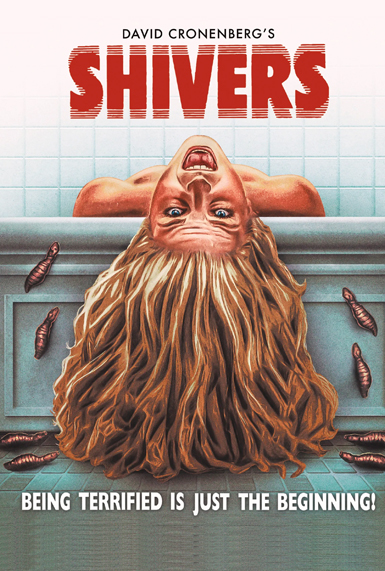 Overview: A seemingly idyllic apartment complex holds a dark secret, it's inhabitants are infected by a parasite and soon succumb to their basest emotions. Who will survive and will it spread?

David Cronenberg is one of those directors that you either love or love to hate. He certainly has a divisive subject choice and way of making his films but even if you’re not into hm you can’t miss the allegories regarding capitalism, consumerism and greed that are at the heart of the majority of his films.

Shivers is Cronenberg’s third outing as director and sets the tone for his later films (Rabid, The Brood and Scanners being the obvious examples).

The film opens with a TV advertisement for a new apartment complex called “Starliner Island”, a luxury complex located just outside Montreal, Canada.

While the architecture and décor is very much of it’s time (mmmm, love me some mid-seventies kitsch) the resort is the height of luxury and is a completely self-contained complex with everything the modern man (or woman) about town could need such as a food store, a doctor & dentist surgery and an inept security guard who doesn’t know how his gun works.

After a bit of filler involving a new couple being given a tour so the audience can understand the layout of the building and the facilities, we cut to a rather sweaty man who is chasing a young woman who is dressed in a school uniform. I’ll give a content warning for this bit at the attack is quite explicit and we see him kill her and then cover her mouth with duct tape which makes no sense… I mean she’s dead, right? What could possibly happen now?

We then cut to Nick (Allan Kolman) who is in his bathroom and appears to be suffering from some sort of upset stomach. Nick, it turns out, is a bit of a dick. He’s horrible to his wife and refuses to go and see a doctor even though he’s obviously not well. He’s one of those characters that you hope something nasty happens to and, well, not long to wait folks!

Nick tells his wife he’s off to work when instead he sneaks up to the School Girl’s room (don’t worry, she’s 19 so it’s all good apparently) for a bit of how’s your father but when he enters the flat he sees her dead on the table with the weird sweaty man dead on the floor next to her. Nick does what every responsible citizen would do and legs it out of there and goes and hides in his office somewhere off of the island.

I’m not sure how the next set of events came to be as I spilled my popcorn everywhere and missed it but for some reason the Starliner resident doctor, Roger St. Luc (Paul Hampton) visits the schoolgirl’s apartment (maybe he was having a bit on the side too? I dunno, I can’t be bothered to rewatch it) and finds her and the sweaty bloke dead and reports it to the police.

It turns out that the sweaty man is Doctor Hobbes who has been working on developing a parasite that can be placed in the human body to take over the functions of organs like the liver or kidneys when they start to fail.

WHAT COULD POSSIBLY GO WRONG?

Well, quite a lot apparently.

At work Nick has a bit of a funny turn and his secretary finds him sat frozen at his desk with blood coming from his mouth. He snaps out of it and decides to go home because why even bother going to the hospital when you start randomly bleeding?

Nick progressively gets worse over the course of the afternoon and he ends up being violently ill in the bathtub and then, rather hilariously he vomits off the edge of his balcony and we see the slug-like creature he’s just chucked up bounce of an old lady’s umbrella and then squirm off into the undergrowth back towards the apartment complex.

In the laundry room, we see a blood trail where the creature has somehow managed to gain access to the building. A woman enters the room but somehow doesn’t see the massive smear down the wall and proceeds to open the washing machine only for the slug to leap out and incapacitate her.

I have some issues with this scene. Firstly, how the heck did a slug manage to open a top loading washing machine? Secondly, how the heck did it incapacitate the woman so quickly? I’m pretty sure if I had some kind of slug creature flying and my face and trying to get in my gob I would have done a much better job of yeeting it the heck out of there.

Nick’s girlfriend returns to the apartment and finds him unconscious with a blood trail leading from him and out of the letter box.

I have never been in an apartment building where they have individual letter boxes, there’s always a mail collection point by the front door but I guess for the purposes of the film we needed a letter box, I mean the slug couldn’t have escaped through the front door that Nick accidentally left open could it? No! That would make far too much sense.

While all this is going on Dr St. Luc has been doing a bit of digging and has been in touch with someone who used to work with Dr Hobbes. While Hobbes was supposed to be working on organ replacement, he decided to stop this line of work after having a bit of an epiphany and turn the parasites he was creating into something that would change the world into the way he thought it should be, writing in his notes that “man is an animal that thinks too much. An over-rational animal that’s lost touch with its body and its instincts.”

Hobbes repurposed the parasites from being something that was going to better humanity into a cross between an aphrodisiac and venereal disease and then used the schoolgirl uniform loving woman as his Guinea pig.

Bad choice as it turns out as she got about a bit and infected Nick and who knows how many others with the sex slugs and now Nick is merrily puking them out at an alarming rate where they scoot off to find another host to infect.

As the infection starts spreading amongst the residents of the Starliner apartment complex it’s up to Dr St. Luc and his hot nurse, Nurse Forsythe (they don’t even give her a first name!), to try and curb the spread and find a cure.

Will they be able to save he residents from sexual depravity or will the sex slugs make it off the island? You’re going to have to watch the film to find out!

While the film is quite well shot, there are some strange directorial decisions that happened like a weird first-person POV running shot that made no sense, far too much obvious product placement (guess you had to fund the movie somehow) and very little character development.

When you factor in though that the film’s budget was only $179,000 (CAD) and it starred horror legend Barbara Steele, Cronenberg was able to get a lot of bang for his buck. Sure, the creature effects are a bit on the cheesy side but it’s not that easy to make a slug look that great and some of the acting leave a little to be desired but It is an interesting take on the type of capitalist, “pleasure at all costs and sod anyone else” type of culture we seem to find ourselves in these days.

Watch this film if you want to try and figure out how a slug could possibly open a top-loading washing machine.

Let us know your thoughts on "Shivers"