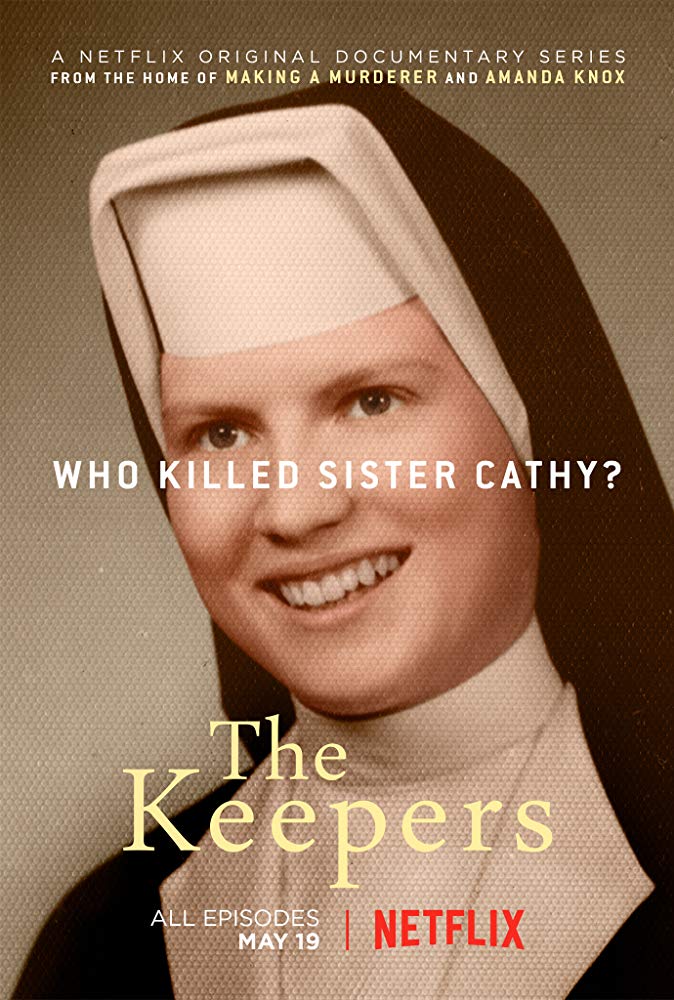 « Chilling Adventures Of Sabrina
Dollface »
Katy Whitton https://www.facebook.com/WhatKatyReviewedNext/
2018-14-11GMT+010010:46:41317What Katy RevIewed Next
The murder of a Nun causes ripples that cross a community - and time. Who killed Sister Cathy? Was it a robbery gone wrong or a sinister cover-up perpetrated by the church she... 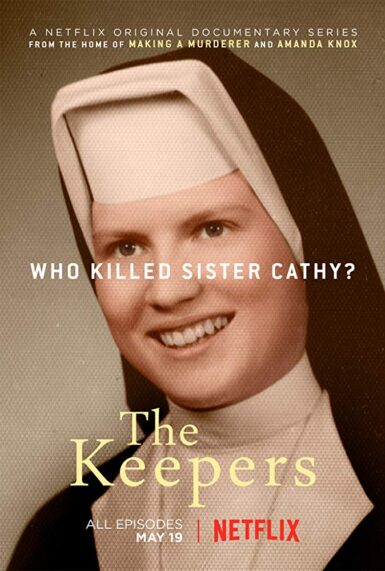 Overview: The murder of a Nun causes ripples that cross a community - and time. Who killed Sister Cathy? Was it a robbery gone wrong or a sinister cover-up perpetrated by the church she loved?

The Keepers is a Netflix documentary series that was first released in 2017 but has been kept under the radar, I think in part thanks to the hugely successful Making A Murderer series. This is a shame as it’s a truly compelling documentary that is certainly worth looking at – especially if you liked Making A Murderer.

The 7 part series follows two former school friends, Gemma and Abbie as they look into the unsolved murder of one of their teachers, Cathy Cesnik. The problem is that this murder happened 40 years ago and Cesnik was a Catholic Nun so cue a lot of brick walls, conspiracy and legal blockage obviously.

Gemma and Abbie are two really sweet older ladies that are doing their best Miss Marple impressions: Abbie is the queen of research (although she seems to think every computer has a touch screen bless her) and Gemma (who may not be so computer literate but my goodness she’s a people person!) who were both students at the Seaton Keough High School at the time of Sister Cathy’s murder. As the documentary joins them they have already done quite a bit of leg work in looking up Cathy’s work files, police files and such but are hitting a brick wall when it comes to reaching out to other people – I suspect this is in part due to the fact that they’re just two women rather than a swanky production crew which I think is why TV was involved.

Sister Cathy went missing one evening after going out shopping for an engagement present for her sister, her car was mysteriously abandoned by her apartment building and her body wasn’t found until almost two months later, left in some woods near a garbage dump.

No one was ever found guilty or even involved with the murder and it still hangs over Baltimore to this day.

Gemma and Abbie have built up a wonderful online community of people that not only celebrates the life of Sister Cathy Cesnik but also puts the system of Catholic schooling under the spotlight that it readily deserves. It was this spotlight that shone a light on the abuse and horrors that went on at their school, showed how the local Catholic dioceses covered the crimes of abuse up and may, still to this day, be covering for their own.

Slowly people started coming forward with tales of what was going on at the school (and at others) – and what Sister Cathy may have tried to confront.

There are some truly harrowing tales in this documentary, particularly when some of the brave abuse victims come forward with their horrendous tales; When you hear of the opportunities that the Catholic Church had to stop the abuse that was going on and instead moved the predator on to a new feeding ground, it had me in literal tears of horror and disbelief.

This is a well thought out documentary – it has to be or the Catholic Church would be shutting it all down as soon as it was put up online and I think their lack of proper response to any of the producers questions is telling. I’m not saying that no response indicates guilt but it certainly doesn’t help prove innocence.

The story does jump about a bit and introduces some “suspects” that I feel don’t really have anything to do with the tale directly but I guess you have to be seen to be covering all bases in order to show that it’s an impartial investigation. There’s also some anecdotal evidence that’s relayed by the production team to the Police Cold Case investigator (he’s only been there two weeks – convenient?) – some so important as to worry him enough to go white on camera and leave to “make a few phone calls”.

I do hope that, even though this was shot a year ago, this documentary was enough to perhaps rattle a few cages, get Police to look properly at the physical and DNA evidence they have (if it’s not been lost) and release anything else that’s being looked for to the family under a freedom of information request.

I’d really recommend this if you’re looking for something different to watch – be warned though: it’s not easy viewing and contains descriptions of sexual assault and abuse. One thing it does show though is that no matter what,  if two school friends can find out this much information before stuff was digitised imagine what we could find out now!

Watch this if you have a large box of chocolates, a wadge of tissues handy and are feeling like you need to shout about how unfair the “world” and the “system” is.

Let us know your thoughts on "The Keepers"