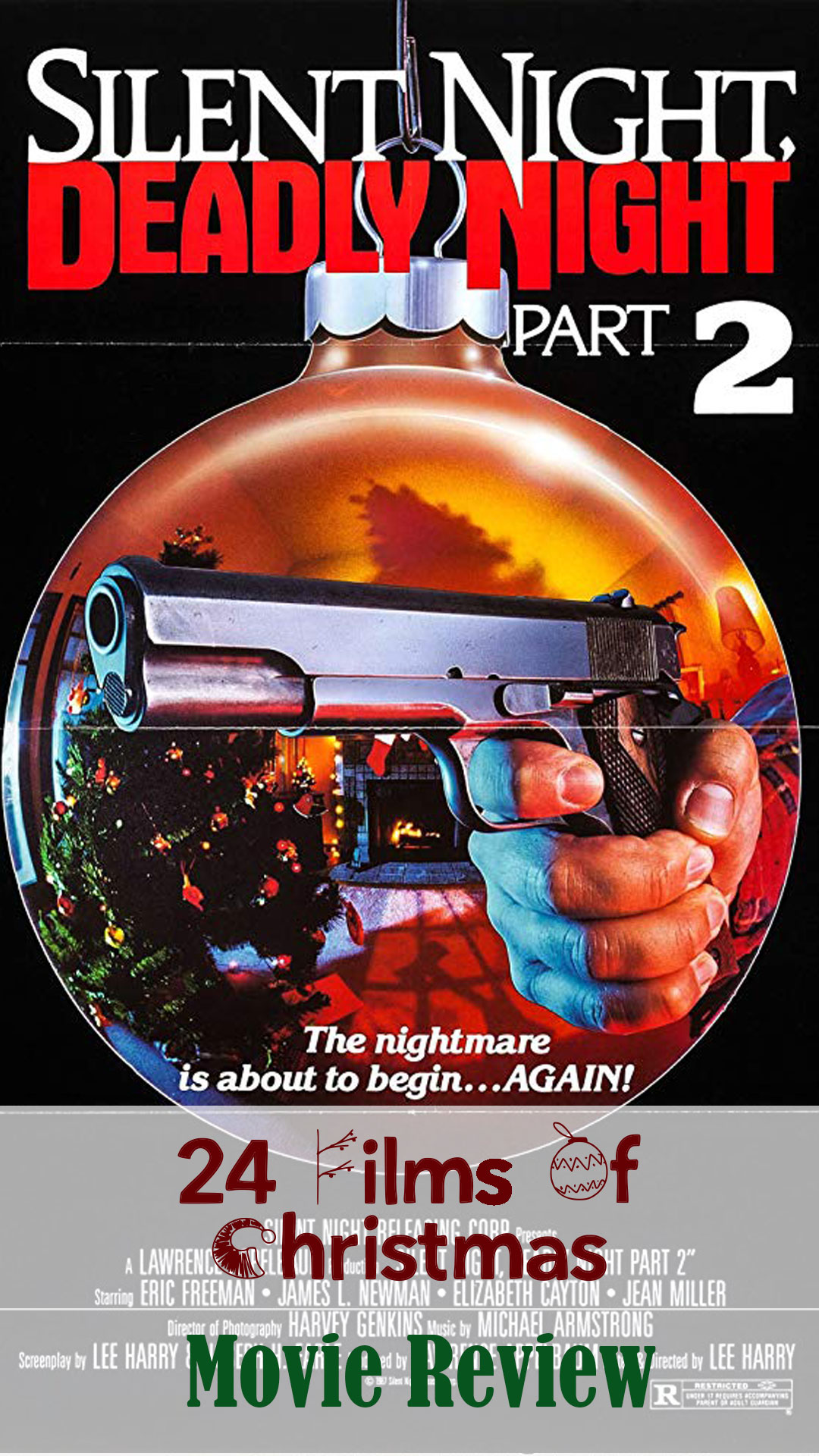 « Don’t Open Till Christmas
Last Christmas »
Katy Whitton https://www.facebook.com/WhatKatyReviewedNext/
2019-07-12GMT+010014:07:13340What Katy RevIewed Next
In this sequel, Billy's younger brother Ricky is traumatised by his brother's killing spree and death. As an adult he soon follows in his brother's footsteps punishing those he thinks are... 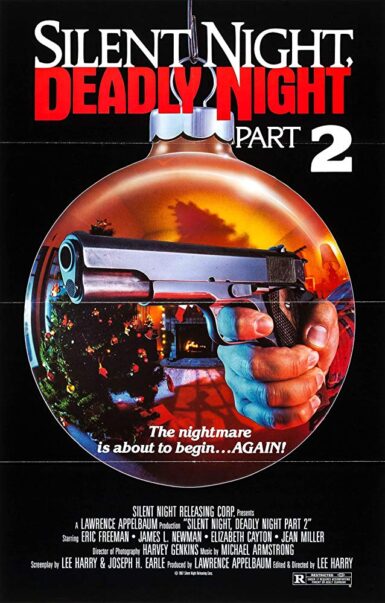 Overview: In this sequel, Billy's younger brother Ricky is traumatised by his brother's killing spree and death. As an adult he soon follows in his brother's footsteps punishing those he thinks are naughty.

The first “Silent Night, Deadly Night” introduced us to the character of Billy, a poor orphan who experienced a childhood trauma and then, as an adult, went on a killer rampage dressed as Santa. This sequel (the second of five) focuses on Billy’s younger brother Ricky, he’s rather ignored in the first film but takes centre stage here.

If you’ve not seen the first film you can read my review here, but don’t worry as Silent Night, Deadly Night 2 spends 40 minutes showing clips from it.

Seriously, there’s no point in watching the first half hour plus of this film if you’ve seen the first one. This is an hour and 30 minutes long and it doesn’t start it’s own story until FORTY minutes in. Ridiculous!

All of the clips from the first film are strung together by Ricky who, as an adult, is in a mental institution and is being interviewed by a psychologist. The problem with this is that A) it adds nothing to the original story B) he’s commenting on things he’d have no knowledge of – he was at least 8 years younger than Billy so wouldn’t have really remembered the childhood stuff and C) it’s a complete waste of time. All I can think is that the writers didn’t have any ideas how to set Ricky’s character up and instead of developing the character so that we understand and feel sorry for him they take the easy way out and put on a clip show.

Once the first half of the movie is over and we’ve watched Billy turn into a killer Santa for the second time the movie finally starts to take a look at Ricky’s childhood – bear in mind we have no idea what he’s done or why he’s in a psych ward so in theory this should be a very important and informative part of the film.

After the events of the first film, the orphanage is shut down and Ricky is sent to live with a pleasant Jewish family – probably for the best for someone who finds Christmas triggering.

The Rosenbergs are a nice family and despite Ricky showing signs of trauma they stick with him helping to provide the stable home life he needed. It seems that if Ricky sees a nun of something that’s coloured red he has a bit of a funny turn – this is a bit problematic when you can’t control what people wear and people drink cans of coke in public on a regular basis but with the Rosenberg’s help he seems to get through this and turn into what appears to be a functioning adult.

After the death of his foster father (who Ricky calls his “step father” for some reason) he begins to go walking a lot in the countryside. It’s on one  of these walks that he sees a guy striking his girlfriend which causes him to flashback to the night his mother was killed – an event he can’t possibly remember as he was a baby and also safely tucked up in the car with no idea of the events taking place outside. Anyhow, something snaps when Ricky sees the abuse and the Woman’s red jeep. We hear Ricky utter the franchise’s catchphrase “naughty” before he jumps into the woman’s car, knock the guy down and then run him over several times.

Interestingly, we don’t see anything of the attack, just a bloody hand afterwards. The first film was very overt (a woman was speared on an antler for goodness sake) but this has turned down the gore factor making it rather a bland and boring film. Strangely enough the film was refused a certificate by the British Board of Film Classification as the producers refused to make any cuts. Having seen the US release, I can’t image what the cuts would be – perhaps the BBFC realised that the film was so bad it was unwatchable and wanted to save the Great British Public from it!

Despite his mini killing sprees, Ricky finds somewhat of a normal life with Jennifer, that is until she witnesses him killing her ex-boyfriend with a car battery, he then strangles her with a car aerial. And no, I don’t know how that works either.

Ricky then kills a cop, steals his gun and goes on a rampage killing anyone he sees. He’s laughing maniacally but there’s something completely off with the performance – he’s not scary, not insane, in fact there’s nothing there at all. That’s not a directing choice by the way, it’s just rubbish acting.


Warning: The following youtube video contains some spoilers and also some very terrible acting. You have been warned
[collapse]

The finale of the film sees Ricky escape the psychiatric hospital and go on another killing spree. This is in the last 10 minutes of the film mind you so you know it’s going to be nothing special.

This film is a totally pointless sequel that took what was a reasonably good film thanks to its character development and rode on it’s coattails hoping the capitalise on its success. The problem is it fails miserably. Silent Night, Deadly Night Part 2 isn’t in the “so bad, it’s good” category it’s firmly in the “so bad it should never have been made” category.

Is it a Christmas movie? Nope. Not at all. Okay, sure, Ricky dons a Santa costume to go on his final spree but as far as I can tell most of the film is set during the summer. There are no seasonal deaths and no real references to Christmas either plus Ricky’s trigger isn’t even Santa unike Billy’s in the first film.

Watch this film if you haven’t seen Silent Night, Deadly Night and feel like getting two movies for the price of one – even if that means missing all the great bits from the first and having all the crap bits of the second.